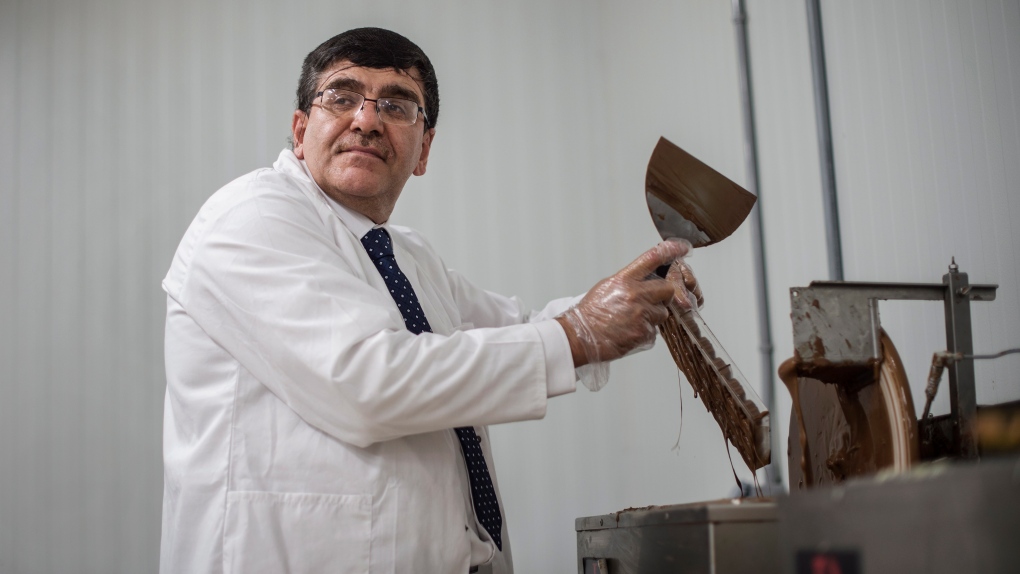 ANTIGONISH, N.S. -- A Syrian refugee said he and his family are giving back to the Nova Scotia town that helped turn them into a world-recognized success story by employing locals and treating the community to tours of their new chocolate factory.

Hundreds of people waited in line Saturday at Peace by Chocolate -- whose sweets have been touted by Prime Minister Justin Trudeau -- to celebrate the grand opening of its new factory in Antigonish.

Tareq Hadhad said his family has built more than a business in the town of about 5,000, but a testament to the value of welcoming newcomers.

"We are just proving that even if we were broken in life, even if we lost everything in our life, with the support of people around us, if we are supported by lovely community, we can come back to life easily," Hadhad said, his eyes welling up with tears.

"(My family is) just thinking, 'What is the best way to say thank you?' And really, we feel we don't need words today. The smile on the faces is just enough. Everybody will be happy when they eat chocolate."

Visitors donned hair nets and plastic gloves as they huddled around red tape for Saturday's main attraction -- a tantalizing tour of chocolate in the making.

Spectators looked on as Hadhad's father deftly scooped molten chocolate into trays, scraping spillover back into the vats where wheels churned through each of the different flavours.

The chocolatier stuffed the shells with nuts and other fillings to create confections shaped like pyramids, roses and maple leafs -- each mould a reflection of the family's "integration" into Canada, said Hadhad.

Hadhad, an aspiring doctor, said his father ran a chocolate business in Damascus for more than two decades before it was destroyed in a 2012 bombing, forcing the family to flee to Lebanon.

After spending three years at a refugee camp, Hadhad said members of his family came to Antigonish with nothing in early 2016.

Hadhad credits the town's support for allowing his family to rebuild -- and said they now want to return the favour by building up the community.

"We are very happy to have a very special and unique, if you'd like, touch and fingerprint on the lives of the people of the town and the province," Hadhad said. "My family, when they came here, they said that they want to have a positive impact. ... Now we're offering more jobs in the factory, we are offering more jobs in the distribution network that will carry Peace by Chocolate all across the country."

Boosted by a shout out from Trudeau at an address to the United Nations last year, Peace by Chocolate has struggled to keep up with demand for its speciality sweets, said Hadhad.

Hadhad, now a board member of Nova Scotia's economic development agency, said the company plans to double its workforce to 20 employees in the new facilities, which are about 15 times larger than the 12-by-six-foot shack where the business got its start.

"I think a lot of people can relate to that coming to Canada and trying to make something new for yourself and make a good go at life," said Glenda Hanlon, who works at the factory. "Antigonish is known for embracing the new, the exciting, and have really come together to support this family ... every step of the way."

Residents of Antigonish said they take pride in seeing their town become a beacon of how openness pays back in spades.

"We're just so happy to have them here, and so happy that they have succeeded. They're really an example for a whole lot of people," said 82-year-old Pat Watson. "We welcomed them, and now they're part of this community, and they're helping to welcome everybody else."

Hadhad said his family's message has resonated far beyond Antigonish, and backed by the community's support, there's no telling how far it can reach.