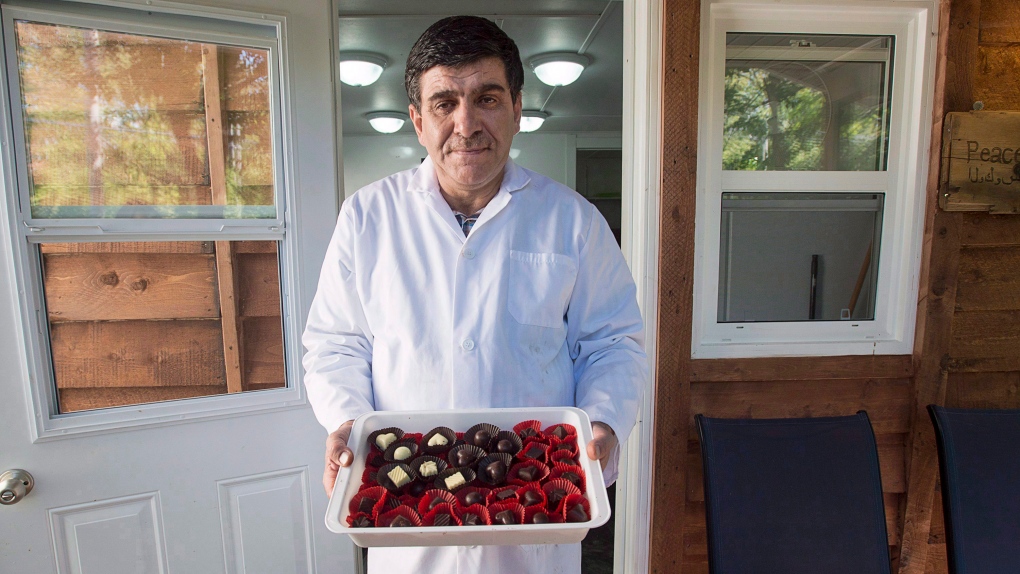 Assam Hadhad, a Syrian refugee who arrived in Canada last year, displays a tray of chocolates at his shop, Peace by Chocolate, in Antigonish, N.S. on Wednesday, Sept. 21, 2016. (Andrew Vaughan/The Canadian Press)

HALIFAX -- A Syrian refugee says his family's thriving chocolate business should serve as an example of the value of Canadian "openness" in a world that has increasingly closed off its borders to refugees.

Tareq Hadhad spoke about his family's journey from war-torn Syria to Nova Scotia, at a TEDx conference at Dalhousie University in Halifax Sunday.

The Hadhads say Peace by Chocolate has been struggling to keep up with orders since earning a shout out from Prime Minister Justin Trudeau at an address to the United Nations last year. Trudeau even had a chance to sample some maple leaf-shaped treats upon meeting the chocolate makers during a trip to Sydney, N.S. last November.

"It's not a chocolate business, as you all think. It's all about a message from newcomers to their new community," Hadhad told the crowd. "Peace is the most noble value that human beings should fight for ... Chocolate is the magic product of happiness."

Hadhad says his father ran a chocolate factory in Damascus with around 30 employees that shipped specialty treats all over the Middle East. An aspiring physician, Hadhad says he abandoned his studies and fled to Lebanon with several family members after a 2012 bombing destroyed the business his father had built over the course of more than two decades.

After three years at a refugee camp, Hadhad says he got his first taste of Canadian hospitality before even setting foot in his new home.

"This is Canada. The nation that received immigrants from all over the world to be one nation," said Hadhad. "A Syrian newcomer would become Canadian the first time you are on the airplane."

The family settled in Antigonish, N.S., or as Hadhad calls it, "the middle of nowhere" a little more than a year ago. After the initial "culture shock," he says he was taken aback by how eager locals were to help him and his relatives fit into Canadian society.

Hadhad says Peace by Chocolate was founded in part as a way of "giving back" to the country that welcomed them so readily by creating jobs in their small community, donating profits to relief efforts in Fort McMurray, A.B., and of course, sharing their decadent chocolate treats with Canadians.

Hadhad told the Associated Press in January that he was denied entry to the United States where he had planned to meet with the governor of Vermont.

In an interview with The Canadian Press on Sunday, Hadhad says he hopes word of Peace by Chocolate's success reaches the Donald Trump White House as a symbol of how "everybody wins" when a country embraces newcomers.

"Maybe we started from zero, but we brought our skills with us," he says. "If we close our minds and close our borders ... these countries will lose a lot of the experiences immigration can bring."