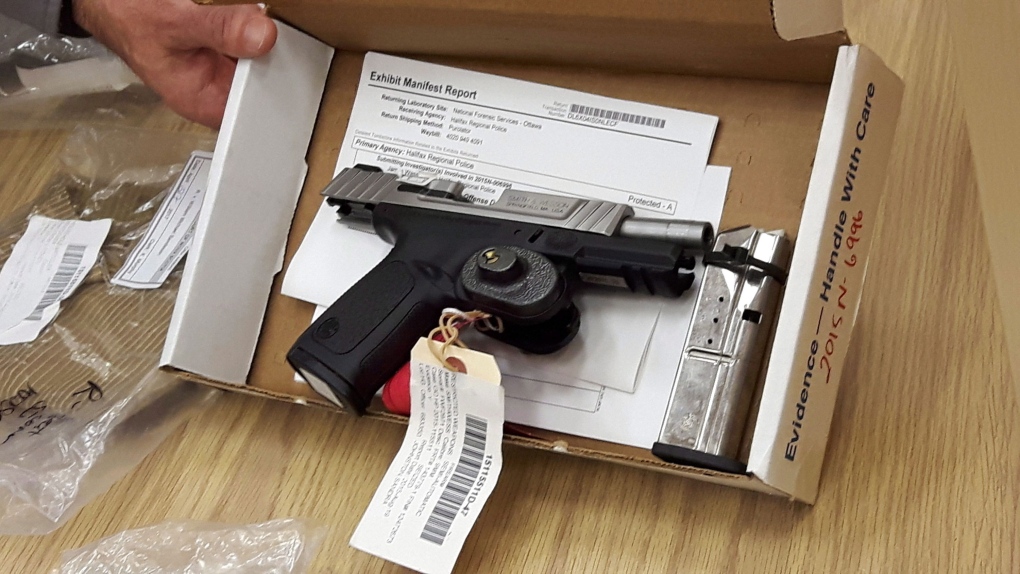 A 9mm gun, a part of evidence in the first-degree murder trial of William Sandeson, charged in the death of Dalhouse University student Taylor Samson, is shown in court on Thursday, April 27, 2017. (THE CANADIAN PRESS/Kieran Leavitt)

A DNA specialist has told the jury at William Sandeson's first-degree murder trial Wednesday that Taylor Samson's DNA was found on items seized from Sandeson's Halifax apartment and from his family's farm in the Truro area in August 2015.

Florence Celestin works at an RCMP forensic lab in Ottawa, where evidence in the case was sent for DNA testing.

Celestin told the court Samson's razor blade and water bottle were swabbed in order to get a DNA sample. The sample was then checked against his parents' DNA to ensure it was a match.

Celestin testified that lab results confirmed Samson's DNA was found on a gun and a piece of flooring seized from Sandeson's apartment. A chair in the apartment and the trunk of Sandeson's car also tested positive for Samson's DNA, she said.

Court heard that Samson's DNA was also found on a number of items seized from the Sandeson family farm, including a shower curtain, a duffel bag and some garbage bags.

Defense lawyer Eugene Tan questioned Celestin about the evidence bag containing the flooring from Sandeson's apartment, which had been perforated. He also questioned her about a reported spill at the lab in Ottawa, but Celestin told the court she wasn't concerned about cross-contamination, and that no issues arose as a result of the damage to the bag and the spill.


A cell phone analyst told the court that Sandeson’s mother was upset that he was $75, 000 in debt on in his line of credit.
Sandeson is charged with the first-degree murder of Samson, who was last seen alive the night of Aug. 15, 2015. His body has never been found.