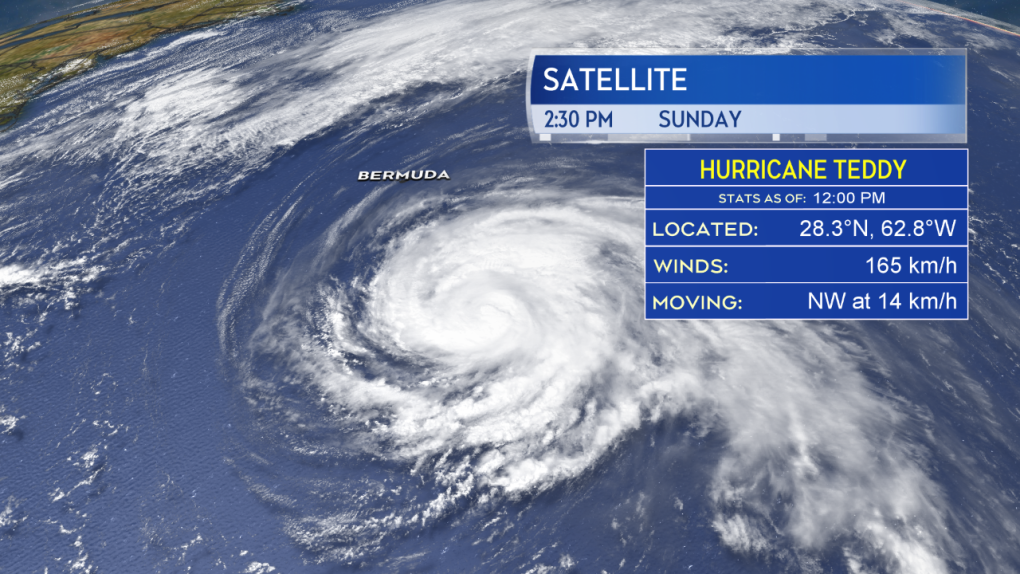 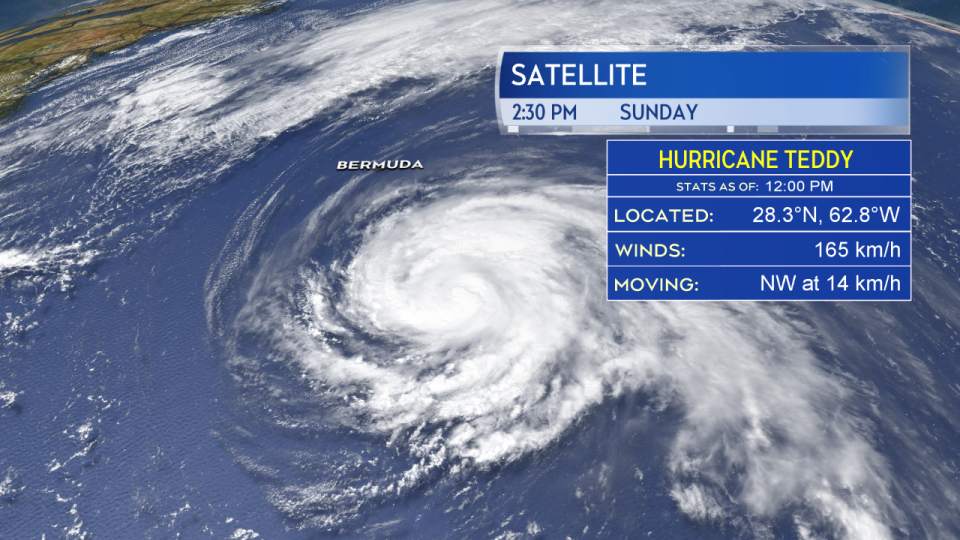 A slight weakening of Teddy occurred Sunday morning with the hurricane now Category 2 with maximum sustained winds near 165 km/h.

The storm is forecast to move east of Bermuda as a Category 2 hurricane before becoming a strong post-tropical storm as it arrives into the marine areas of the Maritimes.

The post-tropical storm is forecast to approach or make landfall in eastern Nova Scotia Wednesday morning before moving towards western Newfoundland. 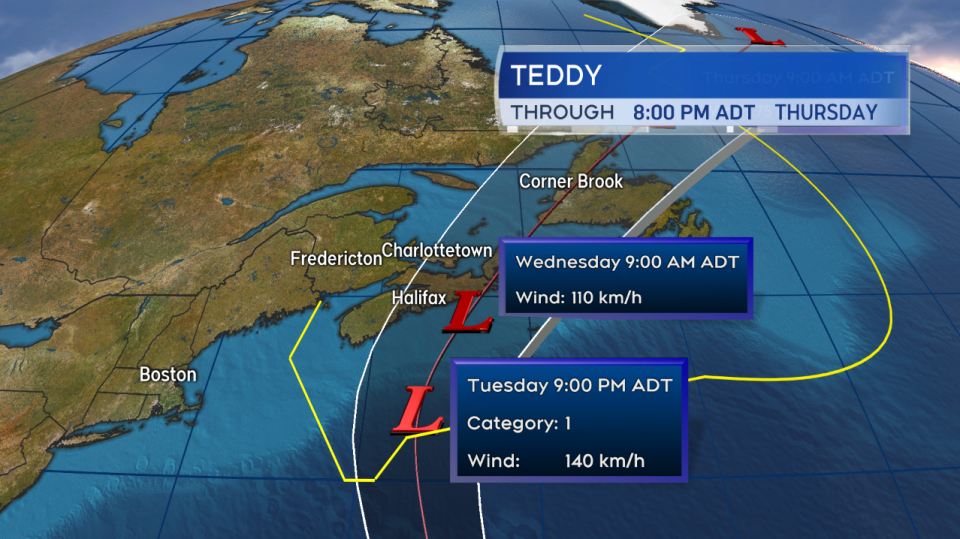 Teddy is a post-tropical storm as it moves through the Maritimes marine districts. The centre of the storm is expected on or near eastern Nova Scotia Wednesday morning.

Due to the increase in size during its transition to a post-tropical system, rain and wind are expected to reach the Maritimes well before the arrival of the storm's centre. Much of eastern Nova Scotia and eastern P.E.I. are still at risk of experiencing tropical-storm-force winds ahead of, during, and directly behind the passage of the storm.

Weather conditions for the Maritimes will generally deteriorate Tuesday afternoon into evening, ease briefly late Tuesday night, followed by a second round of rain and wind Wednesday morning into early afternoon. 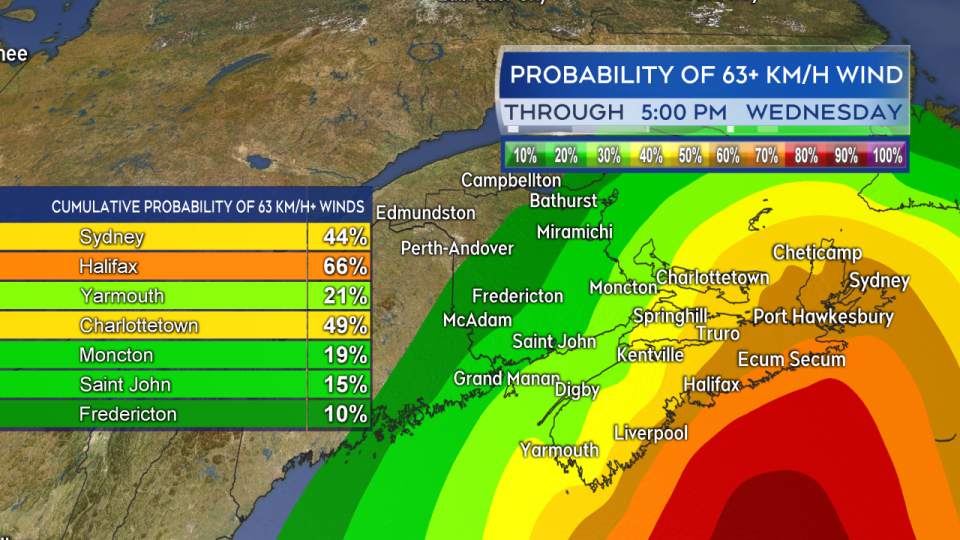 Due to the expanding wind field during the change to a post-tropical storm near tropical-storm-force winds are still likely for eastern areas of the Maritimes.

In a media briefing held Sunday afternoon by the Canadian Hurricane Centre, weather preparedness meteorologist Bob Robichaud said the C.H.C. does not expect the scale of impact to match that of post-tropical storm Dorian last year. As of Sunday afternoon, they also expect very little impact for New Brunswick and western mainland Nova Scotia. The C.H.C. did stress that concerns of high winds, heavy rain, and rough surf remain.

Queens and Kings Co in Prince Edward Island, along with Queens Co and east in Nova Scotia appear the most likely to experience peak gusts 70 to 90 km/h, with some exposed areas of the coast as high as 100 km/h. Outside of that area, gusts are forecast to generally reach 40 to 70 km/h. A high point in winds is expected Tuesday evening, followed by a lull late Tuesday night, followed by a second period of high winds Wednesday morning into early afternoon. The initial winds on Tuesday are from the north and northeast – which will turn northwest and west on Wednesday.

A risk of power outages remains due to the strong winds in combination with leaves on trees and heavy rainfall for some areas. 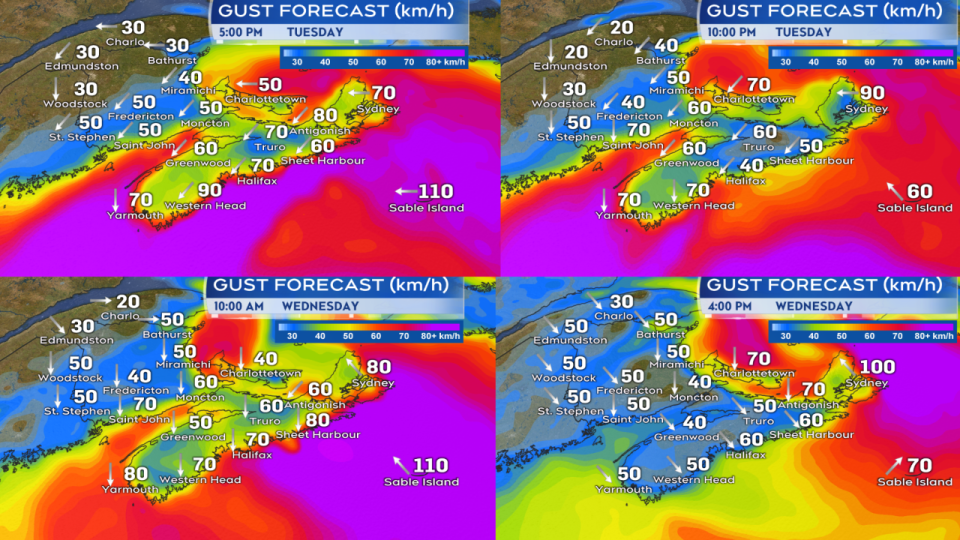 Higher wind gusts, particularly for the east of the region, will develop for Tuesday evening. A brief lull is expected for many areas overnight with a second peak of high winds to follow Wednesday morning into the afternoon.

A band of heavy rain is expected just to the north and west of the track of the storm. This band could contain rainfall totals as high as 50-100+ mm. While the position of that band is to be determined, the area of risk generally encompasses Halifax to Charlottetown and east to Cape Breton. Outside of that area, general amounts of 20-50 mm seem likely with even lower amounts for Digby and Yarmouth Counties in Nova Scotia and much of western New Brunswick. 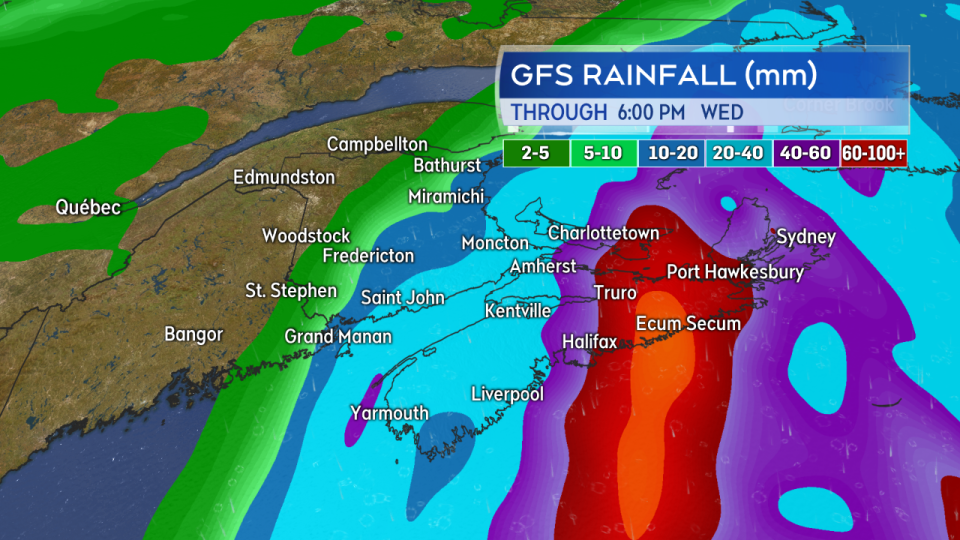 While remaining one of the more uncertain aspects of the forecast, there is the risk of a band of 50-100+ mm of rain across eastern areas of the Maritimes. Rainfall significantly lower for western N.B. and southwestern N.S.

There will be a rough and pounding surf present on the coast Monday through Wednesday. The Canadian Hurricane Centre states a risk of storm surge for Atlantic coastal Nova Scotia on Tuesday and for P.E.I. late Tuesday. The risk will be highest at high tides. Tide tables are readily available at www.waterlevels.gc.ca. The two general periods of high tides of concern for those areas are Tuesday afternoon and late Tuesday night.

While forecast guidance has been in good consensus this weekend, there is still time to see a change in the strength and track of the storm – monitoring the forecast regularly is highly recommended.