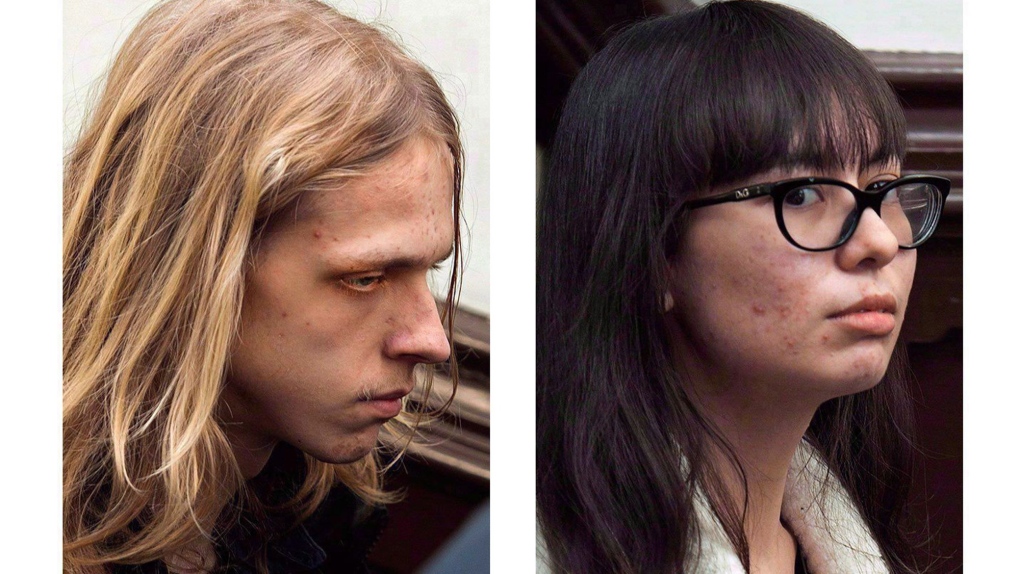 HALIFAX -- They called it "Der Untergang" -- The Downfall.

The plan, conceived by a young Canadian man and, allegedly, an American girlfriend, was to kill as many people as possible in an attack on a Halifax shopping mall on Valentine's Day 2015, and to take "their place of fame amongst the world's mass-murderers."

"The massacre was to end with their own suicides," according to an agreed statement of facts released Tuesday at the sentencing of 22-year-old Randall Steven Shepherd, described as a "cheerleader" for the two alleged plotters. The Halifax man was ordered to serve 10 years in jail after he pleaded guilty to conspiracy to commit murder.

The document offers many new details of the plot, which was led by 19-year-old James Gamble, Shepherd's best friend, and allegedly joined by an Illinois woman Gamble had met online, Lindsay Kantha Souvannarath, 24. The allegations against her have not been proved in court. She is scheduled to go on trial in May.

Gamble killed himself as the plot unravelled and police moved in.

The statement of facts says Gamble couldn't persuade Shepherd to join him in the actual attacks, but he allegedly found an "eager" partner in Souvannarath, who allegedly had an interest in school shootings and Nazism.

"The two often discussed how many people would be killed, what they hoped for, and what body count they would be happy with," the document says.

A music soundtrack was created and they agreed to post a video of the slayings on the Internet to solidify their fame amongst the world's mass-murderers, the statement says.

The plot was foiled when police received an anonymous Crime Stoppers tip, police say. Gamble killed himself as police tried to arrest him, while Shepherd and Souvannarath were arrested at Halifax Stanfield International Airport when he tried to pick her up on Feb. 13, 2015.

The agreed statement of facts describes how the group assembled and conceived a plan.

Shepherd, who had previously been home-schooled, met Gamble in high school; both were social outcasts who bonded over "heavy metal music, gore/horror movies, marijuana and a shared fascination with death and morbidity, including school shootings and mass murders."

Both became suicidal, Shepherd because of poor job prospects and failed romantic relationships, while Gamble had "homicidal ideation," the document says.

Shepherd was willing to be only a "receptive audience," but Souvannarath -- with whom Gamble had been swapping explicit photographs -- was allegedly "eager to participate," the document says.

Gamble and Souvannarath allegedly planned their attack in January and early February of 2015, discussing different locations including the new Halifax Central Library, which had opened only a few weeks earlier.

The duo talked about weapons, ammunition, clothes, the number of dead, "whether they would taunt the victims," and whether to upload pictures to the Internet as the massacre unfolded, the document says.

The two picked the Halifax Shopping Centre because it meant "mass panic," it says. They would start at the food court, which they thought would give them the best cover, using guns owned by Gamble's father as well as a knife, the statement says.

Shepherd wasn't part of these conversations, but he knew what Gable was planning, and offered to provide bottles for Molotov cocktails. He planned to kill himself on Feb. 13.

"Is there nothing I could say to convince you to join me with my plan (?)," Gamble asked him in one Facebook exchange, quoted in the statement of facts.

"Sorry, James ... If I had more time to mentally prepare myself, perhaps ... but I am going to die. I'm not going to hurt," said Shepherd.

However, Shepherd went with Gamble to the mall, where they recorded videos used to plan the attack. Shepherd said that if at least one person from his high school died, it would be worth it, and he asked Gamble if he had any final words.

"You're lucky I couldn't get any more bullets," Gamble said.

The pair called the videos "basement tapes," referring to similar videos made by Eric Harris and Dylan Klebold, the two high school outcasts from Columbine, Colo., who shot and killed 12 classmates and one teacher before taking their own lives in April 1999.

In the days before the planned attack in Halifax, Shepherd bought a hacksaw and other materials to make Molotov cocktails, and offered Gamble advice on fulfilling his plan to kill his mother beforehand, suggesting he use a pillow to reduce the sound and blood splatter.

But the plan began to fall apart on Feb 13.

Souvannarath left her home in Geneva, Ill., and flew to Halifax on a one-way ticket, allegedly carrying her "death outfit" and two books on serial killers in her luggage. As Shepherd went to meet her at the airport on a city bus, Gamble delayed his plan to kill his parents for reasons unspecified in the statement of facts.

Police, acting on the Crime Stoppers tip, surrounded Gamble's home in Timberlea, outside Halifax. He agreed over the phone to come outside, but instead shot himself in the head with his father's hunting rifle.

Still on the bus, Shepherd read on social media that gunshots had been heard at Gamble's house. He was unable to reach Gamble through Facebook.

Shepherd continued on to the airport and was arrested while waiting for Souvannarath, the document says.

The arrests made international headlines and shocked Nova Scotians.

As he sentenced Shepherd on Tuesday, Nova Scotia Supreme Court Judge Patrick Duncan said it's difficult to imagine a crime more damaging to a community's sense of peace and security.

"But for a Crime Stopper's tip (to police) ... Mr. Shepherd's co-conspirators may very well have accomplished their goals," said Duncan.

"This horrible plan would have changed the face of Halifax forever," said Crown lawyer Shauna MacDonald, who had described Shepherd as the group's cheerleader.