There’s an app for that: UNB students create app that helps you pick a place to eat 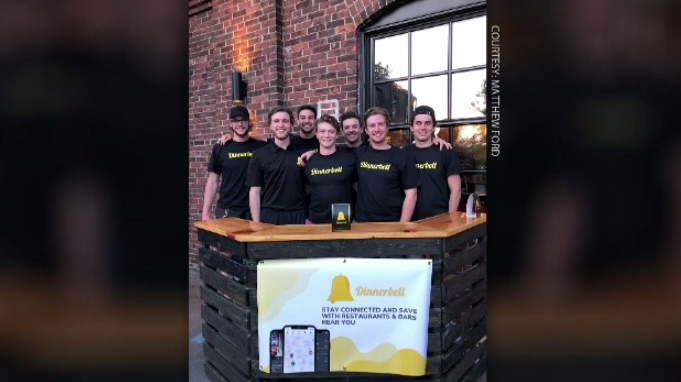 The idea for the app was born when UNB students Matthew Ford, Thomas Gogan, and Cormac Stewart were trying to decide on somewhere to grab a bite to eat one night. (Photo courtesy: Matthew Ford)

FREDERICTON -- A group of students from the University of New Brunswick have created a new app to help people solve the frequently asked question, “Where should we eat?”

What has turned into a growing business venture started with something as simple as hunger pangs.

The idea for the app was born when UNB students Matthew Ford, Thomas Gogan, and Cormac Stewart were trying to decide on somewhere to grab a bite to eat one night.

"The whole process started over a year ago," says Matthew Ford. "A group of us were thinking of an idea for a course project and part of that idea was brainstorming in the living room trying to think of what to do, and we were also kind of wanting to go out and grab a bite to eat and grab something to drink."

“We thought, 'Wouldn't it be nice if there was just something to tell us where to go?’" recalls Ford.

Now, there’s an app for that, called Dinnerbell.

The team says the pandemic gave them the time they needed to construct the app.

"We had all kind of had our summer plans get cancelled from the pandemic, so either losing jobs, or I had plans to travel, and it all kind of got cancelled at once,” explains Cormac Stewart. “Matt brought up the idea and we were all quiet for a little bit, so me and my other two friends were like, ‘We could probably build that.'"

The group released the app on June 18, and say it has already grown a following.

The group hopes with the as pandemic restrictions continue to be loosened in New Brunswick, the Dinnerbell app will get people out, and help direct them on where to go.

For now, Dinnerbell has nine businesses on board in the Fredericton area but they're hoping to expand to even more restaurants - including food trucks who can use the app for announcing their locations.

"We are trying to focus right here in Fredericton for the time being, but from here I think there's a lot of expansion this is like proof of concept so we can provide the restaurant and users with the best experience possible,” said Ford.