'They were full of love': Friends gather to remember Portapique couple killed in rampage

PORTAPIQUE, N.S. -- A small group of friends gathered in Portapique, N.S., on Thursday to mourn the loss and celebrate the lives of Joanne Thomas and John Zahl, who were killed in the recent massacre.

“Their love carried them for well over 30 years,” said Rhonda MacLellan, a friend of the couple who delivered their eulogy.

Thomas and Zahl retired to Nova Scotia from New Mexico three years ago. Their friends say they made lasing friendships during their short time in the province.

“I am abundantly thankful that I was a friend of theirs,” said MacLellan.

About a dozen people attended the memorial service -- while keeping their distance -- in a field in the small community where the rampage started the night of April 18.

A bright red door -- which stands alone in the field and is a staple in Portapique -- provided the backdrop for the memorial.

The friends said they chose the spot because it was a favourite of Thomas's, who often remarked that the red door was a symbol of the community’s rural beauty.

“Joanne loved this door,” said MacLellan. “The owners decorate it during the seasons and she posted multiple pictures of it.” 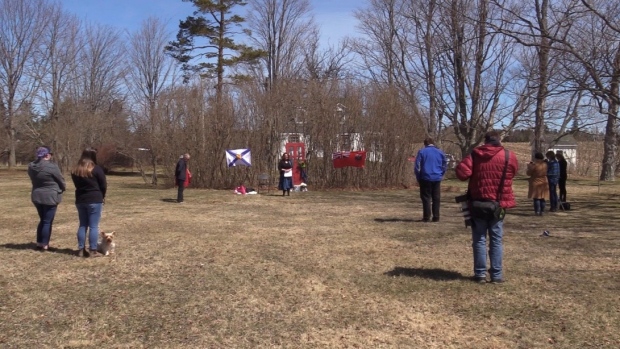 Thomas was originally from Manitoba but fell in love with Nova Scotia on a trip during her teenage years. Zahl was born in Minnesota. She was a retired executive with Blue Cross while he was a Vietnam War veteran who went on to work for FedEx.

Their home burned down after a gunman went on a rampage, claiming the lives of 22 people in several Nova Scotia communities on April 18 and 19.

MacLellan said those who knew the couple are remembering them as shining examples of kindness and generosity.

“They were full of love ... they gave 100 per cent energy, they helped people that other people wouldn’t help,” she recalled. “They were an example of giving and love.”

Thomas was active in Colchester County and volunteered her time.

“She worked at the Truro homeless shelter providing laundry facilities through Saint James Presbyterian Church, where they attended, and every Saturday she was there with the homeless to help them with their laundry,” said friend Carla Shaw.

The mourners said Thursday’s memorial was meant to provide closure for the grieving community, but also to shift the focus from grieving a loss to celebrating their lives.

A very small, private and touching memorial to Joanne Thomas and John Zahl is being held this morning in Portapique, NS.
CTV was invited to attend and we’ll have more tonight on @CTVAtlantic at 6pm. pic.twitter.com/6p8TmcKkHu