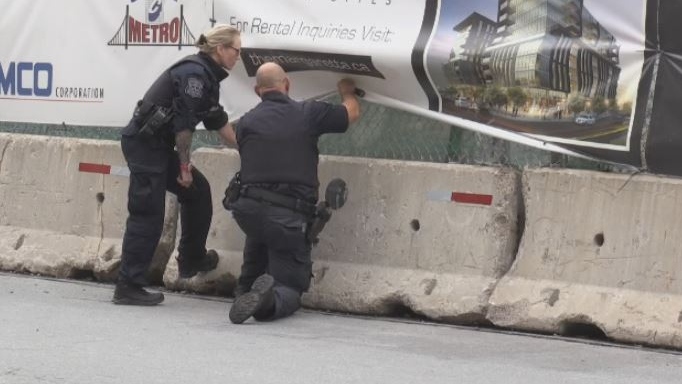 Halifax Regional Police gather evidence as they investigate a shooting on Aug. 9, 2019.

A third man is facing charges in connection with a shooting that sent a man to hospital in Halifax last week.

Halifax Regional Police responded to a report of possible gunshots in the area of Spring Garden Road and Dresden Row around 12:35 a.m. on Aug. 9.

Police confirmed a shooting had taken place and started searching the area.

A police dog also located a handgun in the area.

At 1:20 a.m., police learned a 27-year-old man with a non-life-threatening gunshot wound had arrived at the Queen Elizabeth II Health Sciences Centre.

Police were still looking for a third suspect in connection with the shooting. They arrested an 18-year-old Dartmouth man overnight.

Downey appeared in court Friday to face the charges.

Devonte Denzel McNeil, 26, and Demarqus Shane Beals, 30, both of Dartmouth, are also facing charges, including attempted murder, in connection with the shooting. Both men appeared in court Monday.

Investigators don’t believe the shooting was a random act as the victim and suspects and known to one another.