An epidemiologist in New Brunswick says, at the peak of the Omicron wave, over 5,000 new cases will be reported daily if further precautions aren’t taken.

The New Brunswick government provided a graph showing the projected number of COVID-19 cases expected in the province over the coming weeks, along with the corresponding increase in hospitalizations. 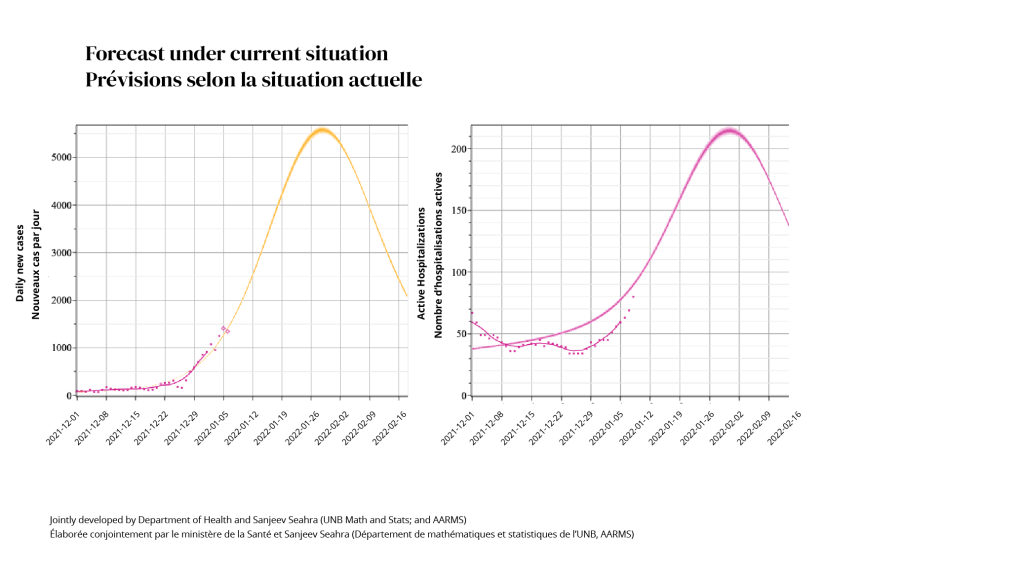 Mathieu Chalifoux, the province’s chief epidemiologist, says these models were built in collaboration with colleagues at the University of New Brunswick and are based on the province's current situation.

"As you can see, if the tendency continues we will reach a high number of cases at the end of January and beginning of February," said Chalifoux. "There will be close to 5,500 new cases per day and close to 220 active hospitalizations."

As trends decrease, in about five to six weeks time, Chalifoux says he expects the province to be where it is at today in regards to COVID-19 cases.

As of Tuesday, Chalifoux says there are 88 people in hospital due to COVID-19, a new high for the province.

Of those in hospital, 24 per cent have received their COVID-19 booster dose.

Dr. France Desrosiers, president and CEO of Vitalité Health Network, says 35 of the 88 individuals in hospital were admitted for other reasons and contracted the virus in hospital.

According to Chalifoux, a graph that shows a seven-day average of active hospitalizations for every 100,000 people allows the province to demonstrate how New Brunswick directly compares to other provinces.

"We can see that on Jan. 8, other provinces, such as Ontario and Quebec, were at levels two to three times higher than where we were at that point in time," explained Chalifoux. "This provides a stark picture of where we are likely heading."

During the province's peak weeks, Chalifoux says it is expected over 5,000 New Brunswickers will develop the virus daily.

"Over a five day period, this would be about 25,000 individuals," Chalifoux said.

In order to avoid the stark predictions, Chalifoux says there are certain steps New Brunswickers must take.

He adds, if New Brunswickers can reduce their contacts by seeing fewer people, distancing appropriately, or wearing well-fitted masks inside, the province's COVID-19 peak could be cut by one-third.

Dr. Jennifer Russell, chief medical officer of health, says New Brunswick is seeing a rapid spread of the virus in every corner of the province.

"We are experiencing record numbers of confirmed infections and more people hospitalized for COVID-19 than any time since the pandemic began two years ago," said Russell.

In an interview with CTV Atlantic's Bruce Frisko on Tuesday, Premier Blaine Higgs said Tuesday's COVID-19 predictions are worst-case scenario that the province must plan for.

"We would hope that it doesn't materialize," said Higgs. "The big focus is really on hospitals and being able to get people back to work."

Higgs says getting vaccinated remains the key. He adds there is also the possibility of tighter restrictions being enforced.

"It is certainly a possibility but I would say one that is wearing thin on the public," said Higgs. "Especially when you have a number of people still unvaccinated, or not getting their boosters as quickly as they could. We certainly have adequate capacity now to do 40,000 minimum a week and we can do higher than that, so people really have to step up to the plate to avoid any further restrictions."

Higgs says he understands people are feeling pandemic-fatigue, and that enforcing restrictions is a bit of a balancing act.

"If this continues and the health-care system cannot manage it, we will have to react and have further closures in the province," he said.