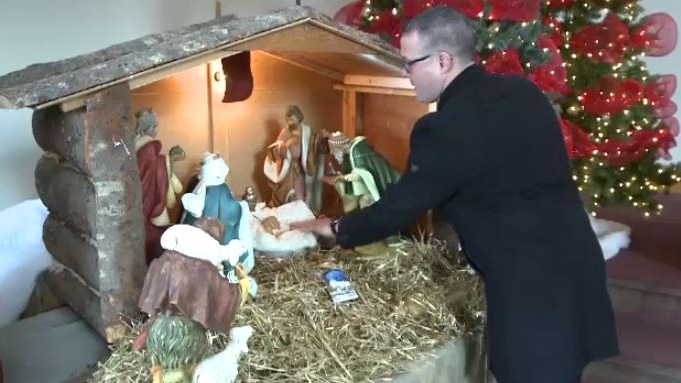 The priest of a Cape Breton catholic church is speaking out after he says four thousand dollars was stolen from his parish just before Christmas.

The priest of a Cape Breton catholic church is speaking out after he says four thousand dollars was stolen from his parish just before Christmas.

Father Patrick O’Neill says he couldn’t help but feel a bit violated as he prepared for this year’s Christmas masses.

He says his parish was broken into while he hosted a holiday gathering at the church glebe house on December 16.

“I made the discovery later in the evening when I was walking by the door,” he explains, “and I was kind of shocked.  I asked the secretary if she left the door open, and she said no. And when I looked in, I noticed the door casing was cracked and it was obvious it was kicked in.”

He says when he checked the desk drawer in the church office, roughly $4000 that had been tucked away in an envelope was missing.

Some of the money came from a fundraising concert the previous night at the church with The Men of the Deeps.

“It was quite a significant amount of money to lose,” he adds, “but thank God for insurance, really, because we will recoup that.”

Still, Father O’Neill wants whoever is responsible to be caught.

He reported the theft to Cape Breton Regional Police.

The priest says the break in was captured on the church’s video surveillance cameras, and that the footage has been turned over to police.

“The person is caught on video in the church at the time,” Father O’Neill explains, “and it’s time stamped, so as of now, Cape Breton Regional Police are investigating.”

Police were unable to provide more details on Sunday.

Father O’Neill says he has made parishioners aware of the theft, and he’s confident a suspect will be caught.

“I’m a priest. I mean, I’m not going to judge people, but I feel bad for the person who did it.”

He’s hoping the money will be returned to the church coffers in the New Year.