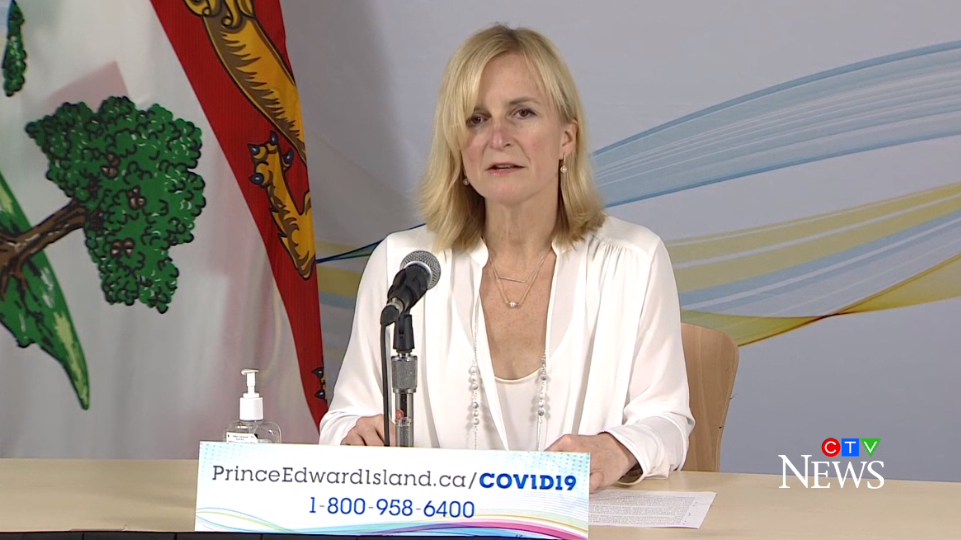 Morrison said on Monday a total of 6,632 COVID-19 tests were completed over the weekend, adding that health officials received 2,250 test results -- all negative -- from a clinic in Summerside, P.E.I., where one cluster has been identified. She said 1,600 results from the area are pending.

Prince Edward Island has 18 active known cases of COVID-19 and more than 190 people who were identified as close contacts of reported infections have been ordered to isolate for 14 days.

Officials said the three-day lockdown will help public health officials contact trace and ramp up testing. Schools and most non-essential businesses are closed until Thursday. The new rules also require Islanders to practise physical distancing with anyone outside their immediate households. Exceptions are being made for people who live alone or require essential support.

The CEO of the Charlottetown Chamber of Commerce says many business owners are frustrated and a bit deflated by the new health orders.

"P.E.I. was doing so well and our freedoms were different than that of other parts of the country, so it's a tough blow that we find ourselves in this situation, but we recognize the need to manage the cases of COVID-19 and clusters we see in the province," Penny Walsh-McGuire said in an interview Monday.

She said while some members feel the measures are overkill, moving quickly has proven effective in slowing the transmission of the virus. "We've seen the results unfortunately in other jurisdictions in our country and globally when that's not done," Walsh-McGuire said.

Health officials announced the lockdown order on Sunday after reporting five new COVID-19 infections, for a total of 17 cases over five days. On Saturday, officials announced so-called "circuit breaker" measures, cutting store and gym capacities in half, banning indoor dining and cancelling many sporting events. Those measures are set to be in effect until at least March 14.

Morrison said the clusters, which are in Charlottetown and Summerside, appear to be connected.

On Monday, Health PEI announced new restrictions for hospitals, allowing patients to have visits from a maximum of three separate people. Exceptions will be made for compassionate circumstances including end of life and in pediatrics, obstetrics and palliative care.

Premier Dennis King said on Sunday it's better to "go harder and stronger" with protective health orders than to delay and risk the kind of outbreaks seen in other provinces. "With hard work, with time, and with your continued support we will get through this," King said in a statement.

He encouraged anyone with any symptoms to stay home from work. "We don't need work heroes," he said. "We need you to be careful and do your part for your community and our province."

Walsh-McGuire said the chamber would be reaching out to the provincial government for emergency support for workers who have been directed to isolate.

Health officials on the Island are scheduled to hold a COVID-19 briefing later on Monday.