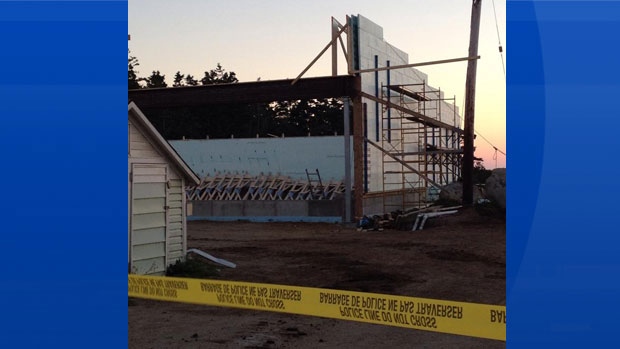 Three people were taken to hospital after the roof of a fish plant collapsed in southern Nova Scotia. (Becky Myers)

NEWELLTON, N.S. -- A construction worker in southwestern Nova Scotia was taken to hospital with serious injuries on Thursday after the roof on a partially built warehouse collapsed on him in a tangled heap.

Two other workers received minor injuries as the roof came down around 5:30 p.m. near the wharf in Newellton, a small town on Cape Sable Island about 250 kilometres southwest of Halifax.

Mike Swim, station chief at the Island and Barrington Passage Fire Department, said the third man was badly hurt as he fell from the roof and was trapped in its trusses.

The man was rescued after firefighters spent 45 minutes cutting through the wooden beams with reciprocating saws, he said.

The building under construction is a so-called tank shop, which shelters large lobster tanks.

"The (trusses) came down inside of the tank," Swim said in an interview from the fire station in Clarks Harbour.

"I'm not sure what caused them to come down (on the man) ... We had to block and cut the roof trusses away from him."

Once the trapped man was pulled from the wrecked building, he was taken to the hospital in Yarmouth, a hour's dive away.

Swim said it appears the man will recover from his injuries, but he couldn't comment on how badly he was hurt.

Stacey Brown, a spokeswoman for Emergency Health Services, says a helicopter and three ambulances were dispatched to the scene, but the helicopter crew was told to return to their base.