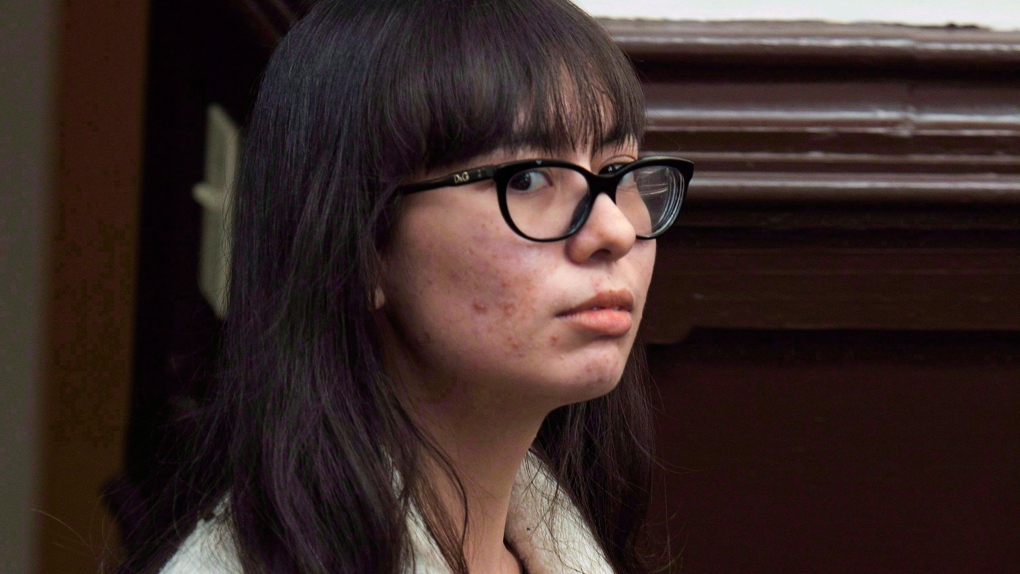 She wore yellow high heels and bright lipstick to class at her middle-class high school in suburban Chicago. She joined a role-playing club that brought Dungeons and Dragons to life, liked creative writing and contributed to the year book.

It wasn't till later that Souvannarath embraced a "school shooter chic" aesthetic, as described in what appears to be her Tumblr blog featuring a pink swastika.

She became obsessed with Nazism, the Columbine shooting and a plot she nicknamed "Der Untergang" -- a Valentine's Day shooting spree at a Halifax shopping mall, according to her former friends and a statement of facts in the case.

It's that plan to go on a murderous rampage at the Halifax Shopping Centre in 2015 that would lead to Souvannarath's downfall -- and a sentencing hearing that begins Monday in Nova Scotia Supreme Court.

Souvannarath pleaded guilty to conspiracy to commit murder last April, several months after Randall Steven Shepherd -- a Halifax man described in court as the "cheerleader" of the shooting plot -- was sentenced to a decade in jail. A third alleged conspirator, 19-year-old James Gamble, was found dead in his Halifax-area home a day before the planned attack.

Luke Craggs, Souvannarath's defence attorney, said in an interview he is recommending a sentence of 12 to 14 years, with credit for time served, while he said the Crown is recommending 20 years to life in prison.

He said his client, now 26, decided to plead guilty after a failed bid to have some social media messages tossed out.

"Once the Facebook messages were ruled admissible, then there was no defence," he said. "Once you see some of the conversations between her and Mr. Gamble, you'll understand why they said that."

Lawyers for the Crown have said there were "hundreds of thousands of pages" of evidence in the case.

The conspiracy can be traced back to December 2014, when Souvannarath and Gamble began an online relationship, exchanging explicit intimate photographs and a fascination with mass shootings, a statement of facts in the Shepherd case said.

The two began plotting an attack. They talked about weapons, ammunition, clothes, the number of dead, "whether they would taunt the victims," and whether to upload pictures to the internet as the massacre unfolded, the document said.

The two picked the Halifax Shopping Centre because it meant "mass panic," it said. They would start at the food court, which they thought would give them the best cover, using guns owned by Gamble's father as well as a knife, the statement said.

The massacre was to end with their own suicides.

Shepherd wasn't part of these conversations, but he knew what they were planning, and offered to provide bottles for Molotov cocktails. He planned to kill himself before the attack.

Souvannarath left her home in Geneva, Ill., on Feb 13, 2015, and flew to Halifax on a one-way ticket, allegedly carrying her "death outfit" and books on serial killers in her luggage.

But the plan began to fall apart before she landed in Nova Scotia.

Acting on a tip, police surrounded Gamble's home outside Halifax. He agreed over the phone to come outside, but instead shot himself in the head.

Meanwhile, Shepherd went to the airport on a city bus to meet Souvannarath, but was arrested while waiting.

Officers also sent online photos of Souvannarath to border agents at the Halifax airport, instructing them to detain anyone matching her description arriving on a flight from Chicago via New York.

When Souvannarath arrived, she was detained by the Canada Border Services Agency.

The arrests made international headlines and shocked Nova Scotians. The spectre of shooters opening fire in the food court of a popular mall threatened thousands of shoppers and workers and unsettled the city for months.

One judge noted that it was difficult to imagine a crime more damaging to a community's sense of peace and security, while a Crown lawyer said the "horrible plan would have changed the face of Halifax forever."

As police in Halifax investigated the conspiracy, officers in Illinois were called upon to search Souvannarath's suburban two-storey home.

"They asked us to conduct a search warrant for her house," Geneva Police Department Cmdr. Julie Nash said in an interview. "We retrieved some computers, electronic devices and things like that."

She added that Souvannarath was not known to local police.

Yet her arrest didn't come as a surprise to a small handful of high school friends.

"When we heard the news that she got arrested at the airport for what she was planning on doing, none of us were surprised," Sabrina Szigeti, a former friend, said in an interview from Aurora, Ill.

In high school, she said Souvannarath displayed a "creepy" interest in Nazis.

"I met Lindsay in the role playing club in my high school," Szigeti said. "We played Dungeons and Dragons and that sort of thing."

She said Souvannarath made other students uncomfortable when she insisted on playing a Nazi ghost.

"Most of us would play gentle giants and elves," she said. "It was really weird."

Szigeti said there were other clues she was troubled, such as comments she made that "stupid people deserved to die."

"She was in my writing club and her writing was so violent and gory and visceral," she said.

However, Szigeti said she was "very quiet in class" and that "none of the teachers could have known" how disturbed she was when she graduated in 2010.

A spokesman for Coe College, a liberal arts college in Cedar Rapids, Iowa, confirmed that Souvannarath enrolled as a student in the fall of 2010 and graduated in 2014 with a bachelor of arts in English and creative writing.

Five days have been set aside for the 26-year-old's sentencing hearing at the Law Courts in Halifax.

On Monday, counsel will make submissions and read an agreed statement of facts into the record. The judge is expected to reserve his sentencing decision and come back later in the week.

Souvannarath is being held at the Central Nova Scotia Correctional facility in a Halifax-area industrial park, though Craggs said she will likely be transferred to a women's institution in southern Ontario after sentencing.

She's been in custody for just over three years.