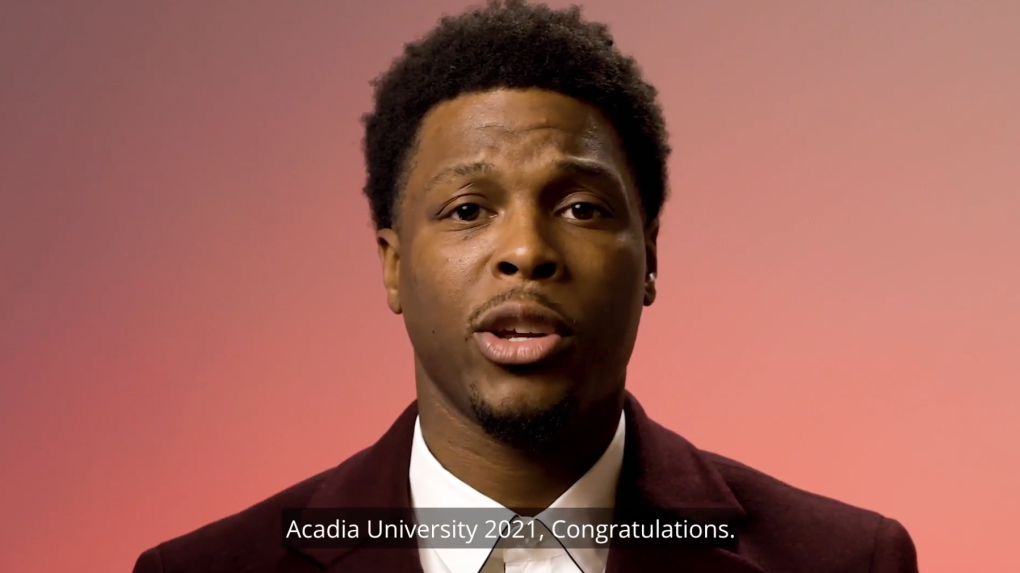 Toronto Raptor Kyle Lowry congratulated students for navigating their studies through the COVID-19 pandemic as he received an honorary doctorate from Nova Scotia's Acadia University on Sunday. (Photo via Acadia University)

WOLFVILLE, N.S. -- Toronto Raptor Kyle Lowry congratulated students for navigating their studies through the COVID-19 pandemic as he received an honorary doctorate from Nova Scotia's Acadia University on Sunday.

Lowry, a point guard with the Raptors and an Olympic gold medallist, received the honorary doctorate of humanities during the university's virtual spring convocation. Although Lowry is from Philadelphia, Pa., he has referred to Canada as his adoptive country.

He addressed Sunday's ceremony in a recorded video, during which he said he is honoured to receive the degree. He spoke about his upbringing in north Philadelphia, calling it "one of the toughest places in America to grow up."

"According to the statistics, I shouldn't be here with you today," Lowry said, referring to the violence in his hometown. He said he overcame the hardships with the help of his family and other important figures in his life.

"Today, I can humbly say and I can humbly confess that I am not standing where I am on my own volition," Lowry said. "Success cannot be obtained without struggle, and it definitely cannot be accomplished alone."

The NBA player asked this year's graduates to think about how they plan to serve their communities as they move on to a new stage of life.

"How will you serve? How will you pay it forward? What will be your impact in your community? And how will you be a change agent for the next generation? If we do not, then who will?" he said.

Lowry was bestowed the degree for his achievements in the basketball world and for his charitable work, the university said in a news release. Some of that philanthropy includes the creation of the Lowry Love Foundation, which he founded with his wife, Ayahna Cornish-Lowry, to help disadvantaged families in Toronto and Philadelphia.

His athletic accomplishments include helping Canada's only NBA franchise win a championship in 2019 and being part of the gold medal winning U.S. men's basketball team during the 2016 Olympics.