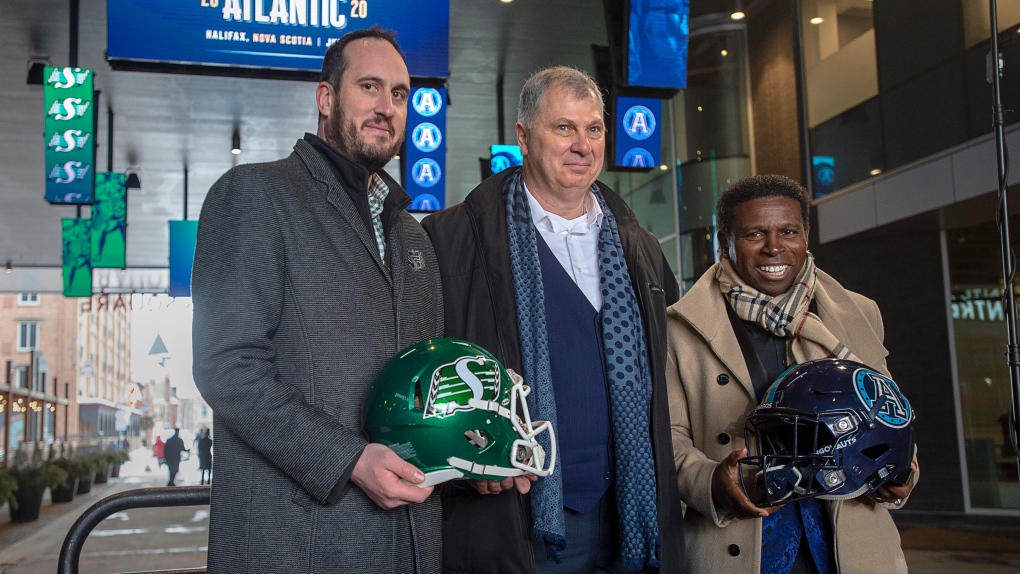 Randy Ambrosie, CFL commissioner, is flanked by Craig Reynolds, left, president and chief executive officer of the Saskatchewan Roughriders, and Mike (Pinball) Clemons, general manager of the Toronto Argonauts, after the league announced a regular season game between the Toronto Argonauts and Saskatchewan Roughriders at a news conference in Halifax on Thursday, Jan. 23, 2020. (THE CANADIAN PRESS/Andrew Vaughan)

HALIFAX -- Maritime football fans who didn’t purchase tickets to this summer’s regular-season CFL game in Halifax may be out of luck.

The Saskatchewan Roughriders are scheduled to play the Toronto Argonauts at Huskies Stadium at Saint Mary’s University on Saturday, July 25.

Tickets for Touchdown Atlantic went on sale Tuesday to the general public, but were available to fans with a presale password on February 27.

A large majority of the 10,000 available tickets were sold during the presale.

The CFL says, with such high demand for tickets, it is exploring new seating options. Capacity at Huskies Stadium has already increased to roughly 10,000. Now, the CFL hopes to expand seating at the stadium to 13,000-14,000.

CFL Commissioner Randy Ambrosie was in Halifax in January when he announced the game and a three-day mini Grey Cup Festival planned for Halifax this summer.

Ambrosie is returning to Halifax next week as part of his annual coast-to-coast CFL road trip.