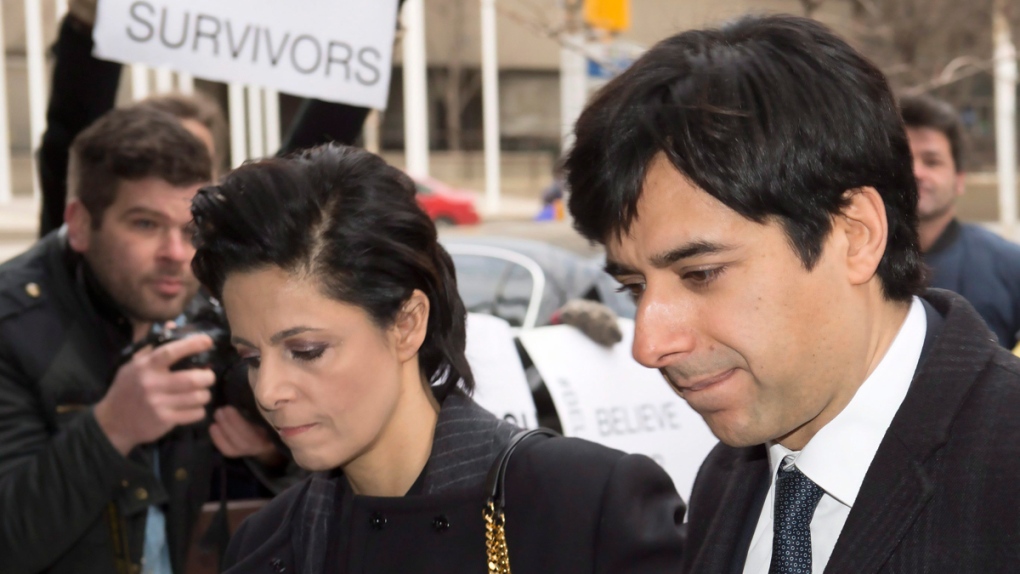 Jian Ghomeshi walks in front of protesters as he arrives at a Toronto courthouse with his lawyer Marie Henein, left, on Feb. 4, 2016. (Frank Gunn / THE CANADIAN PRESS)

TORONTO -- "Trailer Park Boys" actress Lucy DeCoutere acknowledged Thursday at the Jian Ghomeshi sexual assault trial that her profile soared after she made public allegations against the former CBC star as his lawyer repeatedly questioned why she maintained a friendship with him following an alleged attack.

DeCoutere, who has waived her right to a publication ban, was the second complainant to take the stand at Ghomeshi's closely watched trial.

She is one of three women behind five charges against Ghomeshi -- four counts of sexual assault and one count of overcoming resistance by choking. He's pleaded not guilty.

DeCoutere, who angled her body away from Ghomeshi for much of the day, alleged that the 48-year-old CBC Radio personality started choking and slapping her in the face without warning while they were kissing in his bedroom in the summer of 2003.

While she recalled vivid details of the incident when questioned by a Crown prosecutor, Ghomeshi's defence lawyer accused DeCoutere of omitting key details when talking to the police.

In a rapid-fire round of questioning that ended with a courtroom cliffhanger, Marie Henein asked why DeCoutere -- a captain for the Royal Canadian Air Force -- hadn't told police about some emails she exchanged with Ghomeshi after the alleged assault.

Henein noted that the actress only disclosed them to the Crown this week, after the first complainant to testify at the trial was confronted with her own emails to the disgraced broadcaster that contradicted testimony about not contacting Ghomeshi after her separate alleged assaults.

"The very first time this call gets made is because you know the defence might have some of those emails you were worried about," Henein said.

"I didn't understand the importance of after-contact incidents. I also thought, because of my ignorance of the system, that I would be interviewed by the Crown in a way that would allow me to elaborate on my statement," DeCoutere explained.

"When it became clear to me that I would be walking into cross-examination and have the Crown potentially be surprised by contact which I had with Mr. Ghomeshi over time apart from the time that he assaulted me, I was, yes, very concerned that would come as a surprise."

"Do you want to tell His Honour the real conversation that was going on?" Henein pressed.

"I'm not sure what you mean," DeCoutere said quietly, right before the proceedings ended for the day, drawing gasps of exasperation from courtroom spectators.

The cliffhanger came after Henein asked DeCoutere why she failed to tell police about a kiss on Ghomeshi's couch, and a kiss goodbye, after the alleged attack that occurred in his home while she was on a weekend trip to Toronto.

DeCoutere testified she hung around after the alleged assault because she was trying to "normalize" a situation that had left her stunned. She also pushed back against Henein, saying the subsequent smooching didn't take away from the fact that Ghomeshi had assaulted her.

Henein also demanded to know why DeCoutere had not mentioned cuddling in a park with Ghomeshi a day after the alleged assault -- an interaction captured on film. Photographs of Ghomeshi and DeCoutere were then shown in court.

"Is it possible that you have a convenient memory?" Henein asked.

"No, I don't have a convenient memory," DeCoutere replied.

As in her cross-examination of the previous complainant, Henein didn't challenge DeCoutere's allegation that Ghomeshi hit her, but concentrated on other details of the time the two spent together.

She also noted the degree of public recognition DeCoutere's story has brought the actress.

DeCoutere said she first met Ghomeshi at a conference in Alberta in the summer of 2003, where they had friendly and slightly flirtatious conversations that ended with Ghomeshi giving her his business card.

The two emailed and phoned each other over the next month until DeCoutere, who lived in Halifax, made the trip to Toronto.

DeCoutere recalled they went for dinner together and then walked to his house, though, she noted, she had no intention of having sex with him.

Shortly after they arrived, DeCoutere said Ghomeshi suddenly started kissing her, then grabbed her by the throat, pushed her up against a wall and hit her repeatedly across the face with an open hand.

"It just started, there was no buildup," she said. "He started kissing me quite suddenly, and then it was interrupted when he pushed me up against the wall and the way I remember it, he hit me a couple of times and was looking at me and then he hit me again and then he stopped."

DeCoutere testified that she did not consent to being choked or slapped.

"I remember not being able to breathe; shock and surprise," she said. "I had never had an adult hit me before. We weren't having an argument. I was just completely bewildered."

"As I say this now it's outrageous that I stayed and I didn't just leave, but that was my reaction," she said. "I was thinking that maybe this assault was a one-off. I was thinking everyone makes gaffes...I had no framework for where to file it."

"It was like nothing happened, which further fed to my interest in downplaying things," she said.

After sitting in Ghomeshi's living room while he played his guitar, DeCoutere said she left an hour later.

She testified that the next summer, the pair ran into each other at the same Banff conference where they had first met.

During a karaoke session, Ghomeshi walked on stage while DeCoutere was singing and made it a duet.

"The song was called '(Hit Me) Baby One More Time,"' DeCoutere testified. "He took my microphone and that was sort of a weird power play."

She also testified that at an earlier encounter at an awards show, Ghomeshi "put his hand on my throat to remind me that he had choked me and I was totally shocked. For me it was an affirmation."