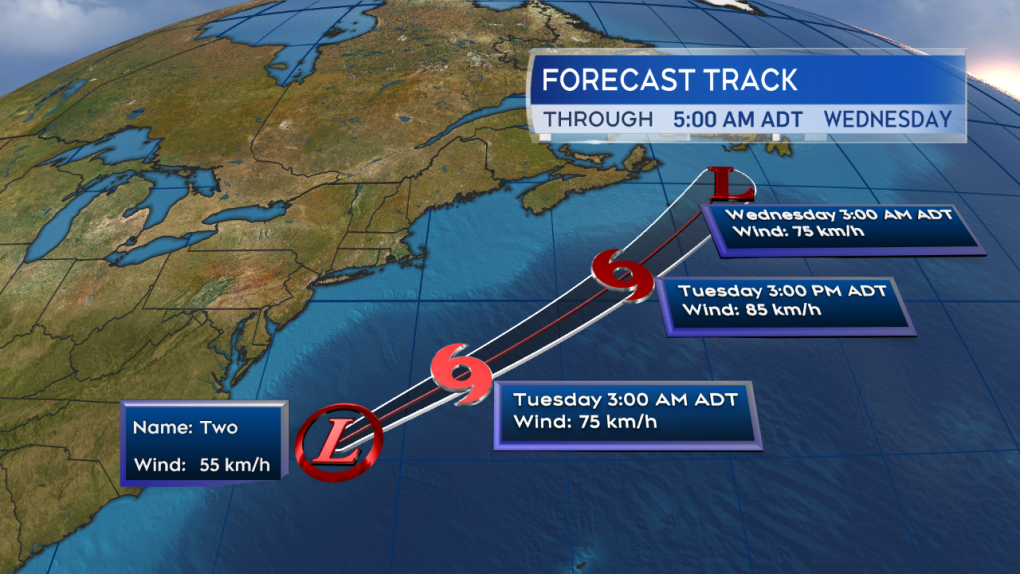 The forecast track for Tropical Depression Two as issued from the National Hurricane Center 6 p.m. Atlantic time on Monday evening.

HALIFAX -- Tropical Depression Two developed off the coastline of the Carolinas on Monday morning.

A tropical depression is the initial stage of what could become a tropical storm or hurricane. It consists of an area of convective weather (thunderstorms) that shows signs of circulation around a core of low pressure. Once the one minute sustained wind speed around that core reaches 63 km/h it is declared a tropical storm.

The National Hurricane Center in the United States has forecast the system to strengthen to a tropical storm Tuesday night as it moves north. Should it reach tropical storm strength it will be the second named storm of the 2021 Atlantic hurricane season, Tropical Storm Bill. The first named storm, Tropical Storm Ana, developed out of season and was short lived near Bermuda from May 22nd to May 24th.

The Canadian Hurricane Centre has issued a Tropical Cyclone Information Statement for the Atlantic coastline of Nova Scotia. In the statement they note that they do not expect an on land impact from the system. Instead they expect the system to pass south and east through the offshore marine districts. As it does so, it is forecast to weaken and become absorbed by a larger area of low pressure moving in from the west on Wednesday.