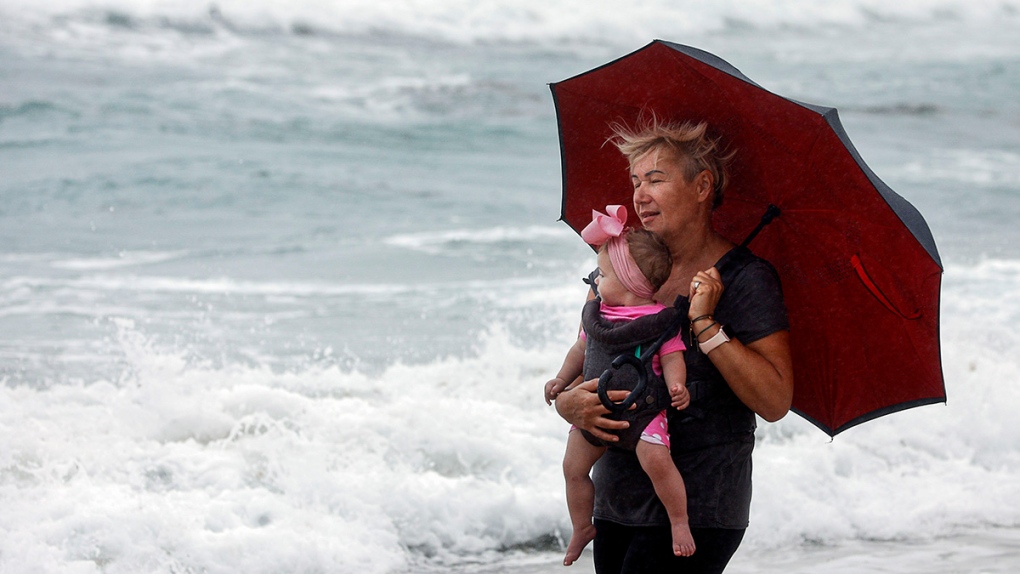 Joanna Janczak, a citizen of Poland, tries to stay dry at Lake Worth beach with 8 month-old Sophia in her arms as Isaias passes by Florida's east coast Sunday, Aug. 2, 2020. (Damon Higgins/The Palm Beach Post via AP)

HALIFAX -- A tropical storm that has lashed parts of the eastern United States should be diminished in strength by the time it reaches eastern Canada, the Canadian Hurricane Centre says.

Centre forecaster Chris Fogarty said that Isaias was on track to enter eastern Quebec through Maine late Tuesday into Wednesday.

"As it moves north of the Carolinas, the storm will be moving quite quickly and it will undergo transformation to post-tropical," Fogarty said in an interview Monday.

"That will mean some heavy rain Tuesday night and early Wednesday through eastern Quebec and some breezy moderately gusty winds across the Maritimes, but nothing of great concern."

Wind gusts were expected to reach 50 to 60 kilometres an hour.

Fogarty said parts of New Brunswick and western Nova Scotia would also likely experience some rain from the weather system -- a brief period of showers of three to four hours duration without a lot accumulation.

"Where the centre of it is moving inland across the U.S. it's not staying out over the warm Gulf Stream," Fogarty said. "So by the time it reaches Canada, it will be pretty much no different from a usual summertime low."

He said there might be some thundershowers with the system, while areas in store for the heaviest of the rain could see "minor street flooding."

Quebec's Eastern Townships is the area most likely area to be affected, with up to 50 millimetres of rain a possibility.

Isaias was expected to hit hurricane strength before making landfall in the Carolinas, where the U.S. National Hurricane Center had issued a hurricane warning. The storm was expected to strengthen into a Category 1 hurricane, with winds of 119 kilometres per hour or more.

Isaias claimed two lives in the Caribbean and blew through the Bahamas, but stayed out to sea as it brushed past Florida over the weekend.

This report by The Canadian Press was first published August 3, 2020.

-- With files from the Associated Press.