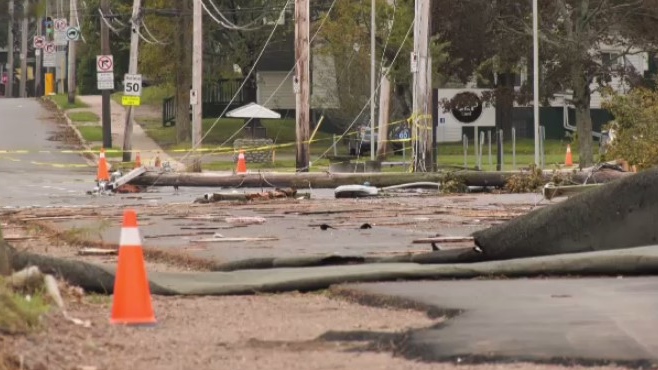 Days after post-tropical storm Fiona hit the region, trees continue to be hoisted out near Truro homes, and the areas high elevation appears to be the blame for the extensive damage.

"I was here for hurricane Juan and we didn’t have it quite this bad," says resident Matt Redmond.

Power crews have been equally as busy as the area suffered hundreds of snapped polls and several fallen lines.

Redmond says he is being realistic with restoration expectations.

"Yesterday we heard it would be Oct. 1 and today we’re hearing maybe this evening, but I’m not going to hold out hope for anything, if it comes it comes," says Redmond.

In Victoria Park, many popular hemlock trees have fallen down.

"People are asked not to come here, it’s dangerous. A significant shift and just a breeze can cause a tree to fall and there are trees leaning on other trees. We’re bringing in a professional logging company to do harvesting and deal with damage," says Mayor Bill Mills.

The local arena and high school also suffered damage due to Fiona.

"The Colchester Legion Stadium is closed indefinitely and as far as, Cobequid Education Center, which is one of the largest schools in the province, I don’t see that opening for the foreseeable future just because there’s no power, no polls, nothing," Mills says.

Mary Legatte operated a souvenir and gift shop in Glenholme, N.S., for nearly forty years. When the storm hit, it was gone in a matter of minutes.

"I’m actually quite shocked to see how it had fallen down with the two trees. I’ve got to think about it. I need time to think as to what to do, it was quite a shock to see the way it went down," Legatte says.

After almost falling off the roof of the former church in Great village, N.S. Friday, the steeple has been eased to the ground with hope of remounting.