Truth and Reconciliation: How to reflect and honour Indigenous history 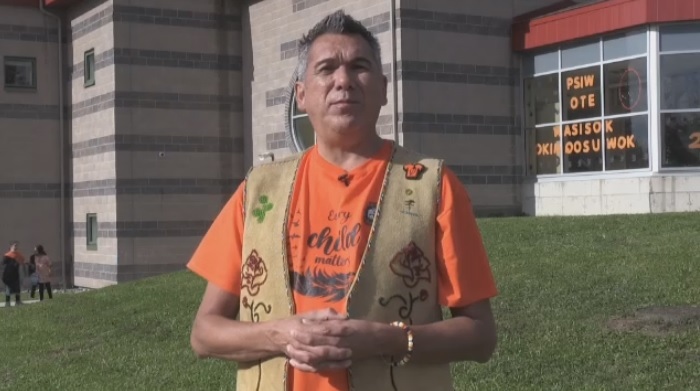 Allan Polchies, chief at St. Mary’s First Nation in Fredericton, says for him, the day is more about people taking responsibility and action, and ensuring education is available to everyone to learn about residential schools and Indigenous issues.
ST. MARY'S FIRST NATION -

Indigenous communities across the nation on Thursday will reflect on its history, honour survivors and remember those who were lost while attending residential schools.

Allan Polchies, chief at St. Mary’s First Nation in Fredericton, says for him, the day is more about people taking responsibility and action, and ensuring education is available to everyone to learn about residential schools and Indigenous issues.

"I hope they reflect and take some time to learn a little bit more of the Wolastoqey territory. I'm encouraging folks to walk along the beautiful Wolastoq River where our identity comes from - our language, our culture - and of course, to reflect on how we can set the path forward," says Polchies.

He suggests taking time to write your local elected officials to express how Indigenous education can be incorporated into the community.

St. Thomas University's Indigenous student services held an information booth on campus Wednesday to help people learn more about Truth and Reconciliation Day, to be celebrated each year on Sept 30.

They're hoping it ignites allyship on campus.

"To take the time out of the day tomorrow to learn about Indigenous issues and the realities that we face, to wear orange, I think is very important. It symbolizes the resiliency of the survivors that attended residential school,” said Trenton Augustine, Indigenous Student Services Coordinator.

Rachel Burke, the Indigenous Experiential Learning Coordinator at St. Thomas University says a lot of people are looking for direction on how to reflect.

"They're just asking 'what do I do?' (It's) a big question for a lot of people, like 'how do I contribute?' I don't know a lot about what's happening, so I just tell them - say a prayer, write a reflection, something that means well, even if it's just something simple," said Burke.

"We're so used to saying 'rest in peace,' and I think that's a good sentiment if you don't know a lot."

For many, Wednesday was an opportunity to learn the history of Canada's Indigenous peoples.

"It was an amazing opportunity to make us really understand everything that happened and to make us reflect about it, because of course we wear our shirts in school, but actually what happened. It made me think about it and realize it,” said Isabella Barald, a St. Thomas University student.

Chief Polchies says it's encouraging for him to see that local businesses and individuals throughout the Maritimes plan to take the day to reflect.

“It's all about the responsibility, it's about the truth, it's about what our friends are doing, because people are very compassionate and they care,” Polchies said.

The Wolastoqey flag will be permanently raised in front of Fredericton City Hall at noon Thursday.