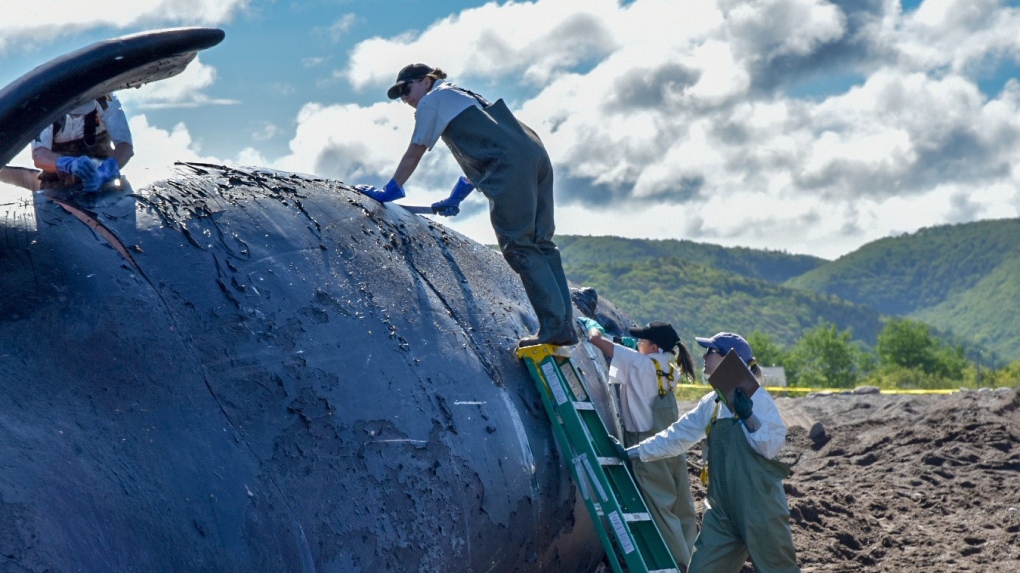 A North Atlantic right whale found dead last week in the Gulf of St. Lawrence has been brought to shore on western Cape Breton for a necropsy. The 40-year-old female whale named Punctuation, was towed late Monday, June 24, 2019 to Petit Etang, N.S. (THE CANADIAN PRESS/HO, DFO/Fisheries and Oceans Canada)

The whales were located near the Acadian Peninsula, N.B., and west of the Magdalen Islands, Que.

Officials said Tuesday that they are the third and fourth confirmed dead right whales reported in Canadian waters this year.

The department said it is working closely with marine mammal experts on two necropsies to determine the cause of death of right whales found earlier this month in the gulf.

In one case, experts reported that there was no evidence of recent fishing gear entanglement or a recent vessel strike, but further testing was ongoing to identify other potential causes of death.

Meanwhile, a massive right whale found dead last week has been brought to shore on western Cape Breton for a necropsy involving a team of about 30 people.

The whale -- a 40-year-old female named Punctuation -- was towed late Monday to Petit Etang, N.S., where pathologists from P.E.I.'s Atlantic Veterinary College were examining the 32-tonne carcass on a local beach.

Isabelle Elliott of the federal Department of Fisheries and Oceans said the team's goal is to make a preliminary determination of the cause of death, followed by a detailed necropsy providing final results in the weeks and months to come.

"Hopefully once all is done, the veterinary pathologist will be able to determine the cause of death."

Elliott said the necropsies typically expect to have a preliminary statement "within a day or so, based on gross examination of the animal."

Bringing the whale's body onto the Cape Breton beach was an operation that went on through Monday night, as a backhoe operator had to dig a narrow ditch to float Punctuation, named for the distinctive markings on its skin, out of the water.

Stephanie Ratelle, a marine biologist with the department, said the pathologists will look at tissue samples from all of the past injuries Punctuation has had, examining the cell structure from muscle, bones, organs and other body parts.

"They're looking to see if there's anything abnormal ... to try and determine the cause of death," Ratelle said.

"There's an injury. They're taking a look at the injury. We have to assess if it's pre- or post-mortem .... They're looking at everything from the bones, muscles, organs, everything they can find."

The team working on the whale includes pathologists, veterinarians, biologists, biology technicians and the backhoe operator.

Samples of every part of the whale's body are cut out, tagged and sent for analysis and for study by experts who specialize in the mammal.

There are also volunteers and staff sharpening knives, cleaning off the workers as their clothing becomes saturated and providing food and first aid.

An aerial survey team discovered the whale's body floating off the Iles-de-la-Madeleine on June 20.

Researchers say they had been studying Punctuation, who gave birth to at least eight calves, for nearly four decades.

There are about 400 of the endangered whales left, with deaths outpacing live births.

A study released last week found more than half the 70 right whale deaths recorded over the last 16 years were caused by entanglement in fishing gear or vessel collisions.

Punctuation's remains will eventually be taken to a gravel pit nearby and buried there.