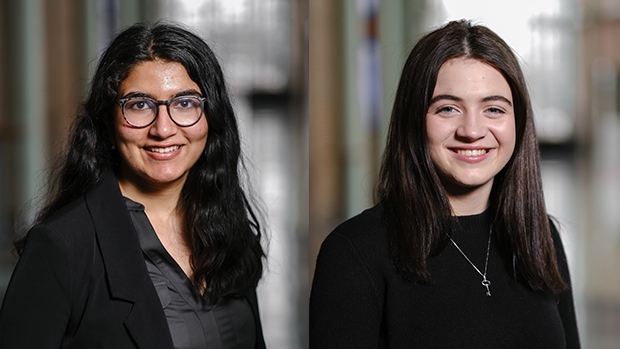 HALIFAX -- Two New Brunswick high school students are heading to university in the fall as Loran Scholars, one of Canada’s most prestigious awards for undergraduate studies.

Heather Chisholm of Quispamsis and Dhanishta Ambwani of Fredericton are two of 36 students selected from across Canada this year by the Loran Scholars Foundation.

The Loran Award is valued up to $100,000 over the course of four years. It includes an annual living stipend of $10,000, a matching tuition waiver, funding for summer internship opportunities and a one-on-one mentorship. The Loran Scholars Foundation’s website describes it as the largest and most comprehensive award in Canada.

“That’s a pretty amazing feeling getting that call,” Chisholm told CTV News about finding out she was a successful recipient.

The 17-year-old is a student at Rothesay Netherwood School in Rothesay and is leaning towards attending McGill University and majoring in Political Science or Foreign Affairs in September.

Dhanishta Ambwani was just as excited to hear the news. The 17-year-old who attends Leo Hayes High School in Fredericton says she experienced a lot of emotions when she realized she was going to become a Loran Scholar.

“I don’t know how to describe it, but I felt like all of my hard work was paying off,” Ambwani said in a phone interview.

More than 5,000 students applied for the Loran Award this year. That number was whittled down to 88 students who travelled to Toronto for the National Selections.

Both Chisholm and Ambwani say the process was intimidating. They had to complete a lengthy application, write essay questions and attend a regional selection interview in Fredericton.

“I was pretty scared,” Chisholm said. “I was excited, but I was also nervous. This was also my first time flying alone. So it’s kind of a big thing. But it was really awesome. It went really well.”

The Loran Scholars Foundation places a strong emphasis on service and volunteer activities in the selection process.

Chisholm has been heavily involved in a project called Schools for Schools and conceived the idea of turning a retired shipping container into a classroom. Since 2017, she along with other students at her school have been fundraising and getting the container ready to ship to Dominica, an island in the Caribbean which has sustained repeated hurricane damage. She says she is passionate about the work they’ve been doing and the container is almost ready to send off.

Chisholm is also a rower and a member of her high school basketball team.

Ambwani is passionate about the arts and started a fundraiser in January 2018 called Youth for Youth Art, which raised hundreds of dollars for a charity that provides funding for underprivileged children to take art programs.

Ambwani says she paints to relax. She’s also a member of her high school debating team and she started a model UN club at her school.

She hasn’t made up her mind yet as to which university she will attend. But she is considering McGill, Dalhousie and Western.

The Loran Scholars have to choose from one of 25 partner universities in order to receive the award. Both students say it’s a relief not to have to worry about finances when considering where they are going in the fall.

“I think it really gives me a little bit of freedom and the opportunity and privilege to go out of my province and experience these things without being too concerned about finances,” said Ambwani, who hopes one day to have a career in medicine.

Chisholm, who is considering a career in law, says the thousands of dollars that will be paid towards her education takes a big weight off her shoulders. She describes the mentorships that come with the award as invaluable.

“Just meeting all the connections and all the really amazing people involved in the program," said Chisholm. “That will be really amazing especially in the area where I want to go into where a lot of it is just getting out there.”