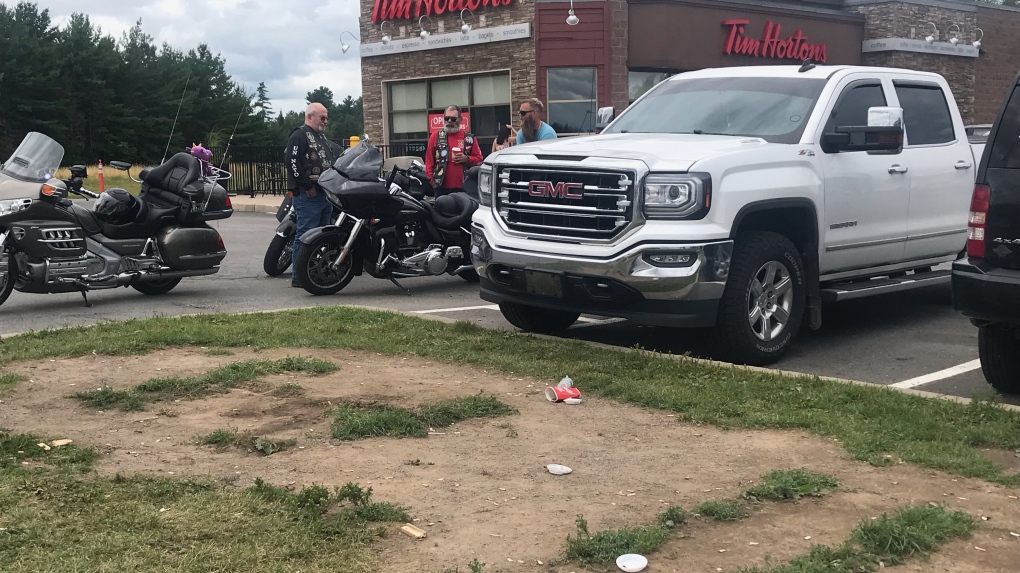 Two people were injured and taken to hospital after an SUV crashed into a picnic table outside this Tim Hortons in Oromocto, N.B., on Aug. 11, 2022. (Laura Brown/CTV Atlantic)

Two people were taken to hospital Thursday morning after a vehicle struck a picnic table in the parking lot of a Tim Hortons in Oromocto, N.B.

The Oromocto Fire Department responded to the restaurant on Gateway Drive shortly after 10 a.m.

“Crews simultaneously worked on removing the trapped individual … with the assistance of Ambulance New Brunswick personnel and bystanders, including some off-duty firefighters,” said Rowe.

“We raised the vehicle, we were able to extricate the trapped individual and two patients were transported to hospital with unknown injuries.”

RCMP Sgt. Jean Francois Martel confirmed to CTV News that two people suffered injuries, and while not believed to be life-threatening, one person has serious injuries.

"All he likes to do is come here and enjoy his coffee," said Gerritt Lush, a friend of one of the victims. "He has three daughters, he's retired, and it's just a shame to see something like this happen because you're just here enjoying your coffee."

No one was arrested on scene, but the vehicle has been seized.

Alcohol or speed is not believed to be a factor. Martel says the vehicle could have had a mechanical failure, although it’s too early in the investigation to determine exactly what happened.

Rowe says he’s thankful for the help of the bystanders and off-duty firefighters, who helped to make a successful rescue.

With COVID-19 on the rise, should you be wearing a mask again? Here's what experts say

As MPs kicked off a study on the future of the House of Commons' use of a hybrid sitting structure, Speaker Anthony Rota is calling for members of Parliament to consider the 'big picture' in making their recommendations as to whether it's time to retire the virtual elements of proceedings that were ushered in response to the COVID-19 pandemic.

'Disappeared without a trace': Kitchener family pleads for help after daughter goes missing in B.C.

Jaqueline McDermott, 22, from Kitchener has been reported missing in B.C., and her family is putting out a plea across the country for help.