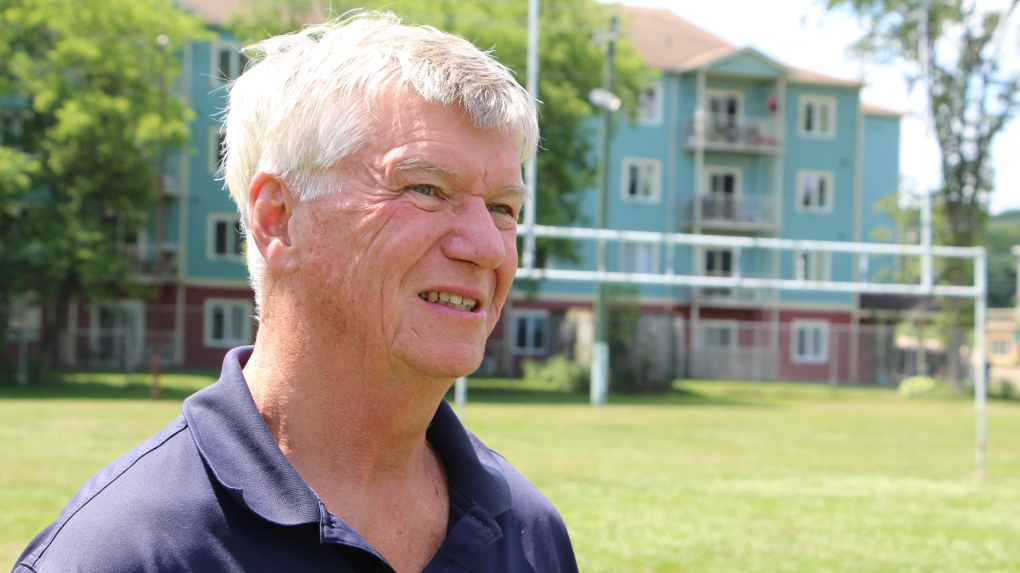 Thomas Pinckard, a former member of the UNB Red Bombers, stands at about the 21 yard line at UNB's College Field in Fredericton in this recent handout image. (THE CANADIAN PRESS/UNB Athletics-Andy Campbell)

FREDERICTON -- A new record for the longest punt in Canadian university football history -- 114 yards -- has now been recognized more than half a century after it occurred.

Pinckard booted the football from his team's 21-yard line and it bounced over the heads of the Saint Dunstan's kick returners, across the goal line and out the back of the end zone at UNB's College Field, which at the time had end zones that were 25-yards long.

"I knew I'd hit it well the minute I hit it," the 75-year-old Pinckard said in an interview Tuesday from Barrie, Ont.

"Interestingly, the snap was high, and I think I jumped a little bit and got it with my right hand and pulled it down. I never really got my second hand on the ball and just brought it down to the foot. There had to be a ton of adrenaline right there .... Onrushing linemen can be a bit intimidating, right?"

The university said the kick was recorded at the time as 89 yards.

However, after a comprehensive review that included analysis of College Field blueprints and sworn affidavits from Red Bombers teammates and the game's official timer, the Fredericton school says the governing body of university sports in Canada now recognizes Pinckard's punt travelled 114 yards -- 13 yards longer than the previous national record.

Aaron Gazendam, playing for the University of Toronto Varsity Blues, kicked a 101-yard punt in a game against Western on Sept. 20, 2014.

Pinckard, who went on to a career as a lawyer, said his punt was a Canadian record at a time when kicks were measured from goal line to goal line instead of including end zone yardage, as they were subsequently.

He said after being advised by friends and ex-teammates that he may still have the record, he eventually phoned the governing body, U Sports.

"They said they would recognize it if there was any possible way to prove it, so that's when it all started," he said. More than two years later, the record is his.

UNB now says it believes the kick is longer than any punt recorded at any level of university or professional football in North America.

It said the longest punt in NCAA history is 99 yards by Nevada's Pat Brady, in October of 1950.

In an interesting twist, the new record is now held by a player who wasn't even UNB's punter. At the time, Pinckard was the team's long snapper.

However, Pinckard said kicking a ball had always been a part of his athletic makeup, having been a soccer player and a high school punter.

"I could always punt, and as a matter of fact I was the best punter on the team," he said. "But I was also a good centre and a good long snapper and I could catch a ball and had some size, so I became a tight end as well. The punter was a pretty good punter, so we didn't need a guy that could get an extra three or four yards."

This report from The Canadian Press was first published Sept. 24, 2019.