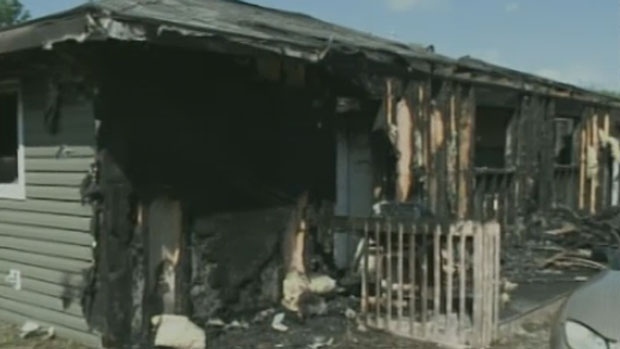 Investigators believe a fire that destroyed this duplex in Sydney, N.S. was deliberately set.

The school year is off to a rough start for four university students who were left homeless after someone burned down their duplex near the Cape Breton University campus in Sydney.

The fire had already engulfed their home by the time it was discovered just after midnight. It was too late to save the building, but two of the students who were in the home at the time of the blaze are just glad they were able to save themselves.

“It was very life-threatening. I took in a lot of smoke,” says fire victim Blair Boone. “I almost threw up I took in that much smoke.”

Boone’s girlfriend was too shaken to talk about the ordeal.

“She was terrified and shocked,” says Boone of his girlfriend’s reaction to the blaze. “I basically had to push her out of the house. She would not move.”

A neighbour who was awakened by the fire says the duplex was an inferno.

“I seen flames just bursting out everywhere, mainly around the front door area of their home,” says Peggy Margetti. “I don’t know how they got out. It was terrifying.”

Investigators believe they are dealing with a case of arson. They say the most compelling piece of evidence is where the fire started.

“We have determined that it was started on the exterior of the building, on the deck area,” says deputy fire marshal Doug MacKenzie. “Other than that, we are still investigating.”

Two international students live on the side of the duplex where the fire started, although they have not yet returned to Sydney for the new school year.

A relative of one of the victims who escaped the fire says he is angry lives were jeopardized.

“If someone deliberately set this, it has to be one cold-hearted son of a gun,” says Greg Martin. “I mean, two people’s lives, and they are both asleep in bed.”

Boone and his girlfriend lost everything they own in the fire and do not have tenant’s insurance. Now they are trying to pick up the pieces of their lives in time for school to start.