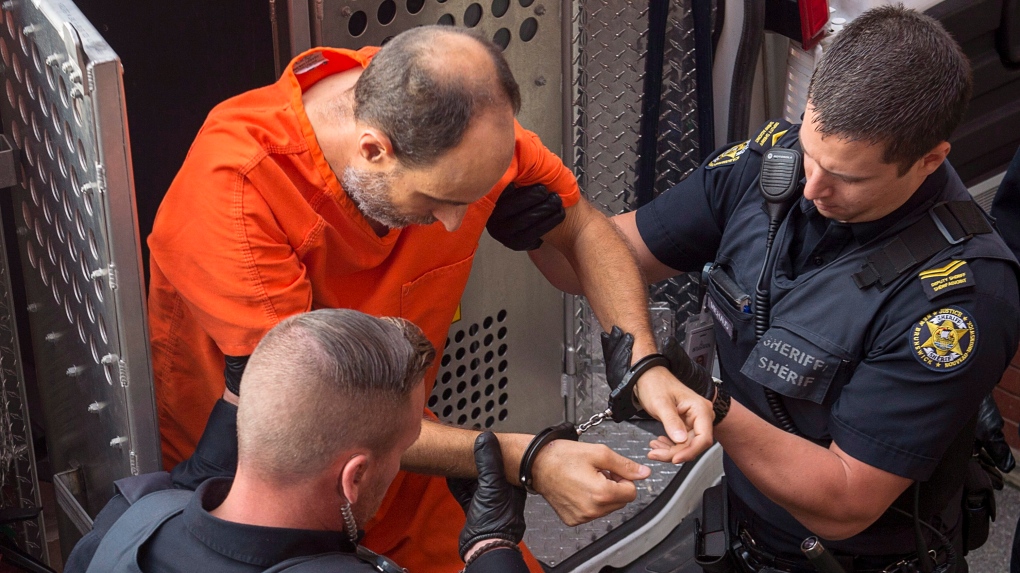 FREDERICTON -- The Fredericton man who allegedly murdered four people last month in a shooting spree was captured on video criticizing Muslim immigration in a 2017 protest outside the provincial legislature.

The seven-and-a-half minute interview with Matthew Raymond was filmed on June 3, 2017, by blogger Charles LeBlanc, who said Wednesday he only recently realized who he had spoken to.

On the video, LeBlanc repeatedly questions the truth of various statements from the 48-year-old Raymond, and his tendency to rely on the internet as a source for his assertions.

Raymond is alleged to have fired down upon four people from his apartment window with a long gun, killing two civilians as they loaded a car for a trip and two police officers who responded to the scene on Aug. 10.

In the video, Raymond states that Muslim immigrants in St. John's, N.L., had successfully demanded the removal of a cross from a church, citing the internet as his source.

The Canadian Press can find no record of a cross removal, though five years ago a high school removed a crucifix from the side of a building.

"The original complainant was a proponent of secular education. We have no information to indicate a complaint was made by anybody of the Muslim faith, or any other particular religious faith," wrote Cheryl Gullage.

In the video, Raymond bases his assertions on what's he gleaned from his memory of online searches.

When LeBlanc asked for his source, Raymond replies, "the internet," but doesn't provide further details.

Raymond goes on to assert that a "whole group" of Muslims are coming into the country and making demands.

Pressed on the accuracy of his statement, Raymond shifts his position, saying, "wherever that cross is, it has been removed."

Raymond was also wearing a sandwich board with statements opposing Sharia law and criticizing Motion 103 -- a federal motion that condemned Islamophobia and passed in the House of Commons.

LeBlanc grows frustrated with Raymond in the interview, and asks him if he had mental illness.

Raymond replied that he did not.

Former friends and acquaintances of Raymond have offered varying memories of the accused murderer, ranging from a boy who retreated into video games, a pleasant supermarket co-worker and an increasingly isolated loner in recent years.

Some business owners have described Raymond as becoming reclusive and occasionally unpleasant in the year before the alleged shootings.

A bicycle shop owner said on several occasions he asked Raymond to leave the bike shop due to his behaviour.

Raymond was frequently seen riding his fat-tire bicycle around the city.

Brendan Doyle, owner of a now-defunct Fredericton cafe, has said that Raymond had been a long-time patron, coming in almost every day for eight years and staying an hour or two on the patio in the evenings.

He'd called him a lonely person who would look at magazines about bikes and about guns, and who had to be asked to leave after disturbing other customers with anti-Islamic opinions.