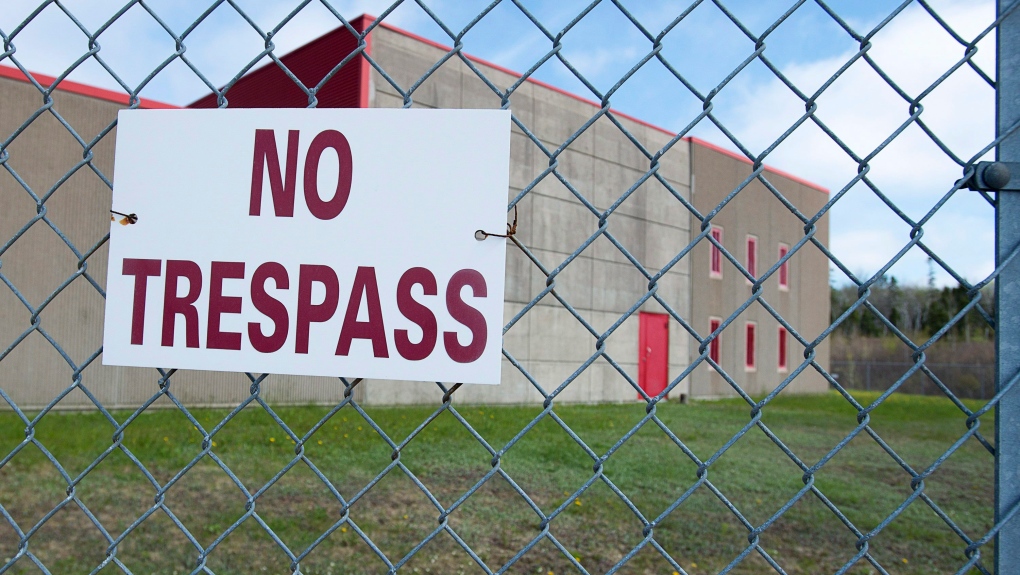 The Central Nova Scotia Correctional Facility yard is seen in Dartmouth on Tuesday, May 15, 2018. (THE CANADIAN PRESS/Andrew Vaughan)
Halifax, N.S. -

A prosecutor presented evidence of rising violence in Nova Scotia's jails Tuesday as he called for tough sentences against inmates who took part in a "brazen" and orchestrated assault upon a new arrival.

Scott Morrison argued in Nova Scotia Supreme Court for a sentence in the range of five to eight years for Colin Ladelpha and Omar McIntosh, the first of 13 inmates to face a sentencing hearing for their part in the Dec. 2, 2019, attack on Stephen Anderson.

In his submission to the judge, Morrison said the sentences for McIntosh and Ladelpha's convictions of aggravated assault need to deter other inmates from participating in group violence at the Central Nova Scotia Correctional Facility.

"One of nuances of this particular case is that it's an act of extreme violence, and it took place in a moment when the inmates took control," the prosecutor said.

Justice Jamie Campbell has found 12 inmates guilty of aggravated assault and one inmate guilty of obstructing correctional officers, saying there was substantial evidence that what unfolded was planned in a meeting of the prisoners.

However, he concluded the inmates' plan was to injure rather than kill Anderson after he was admitted to his cell.

Campbell found all 13 inmates in the first two trials not guilty of conspiracy to commit murder, attempted murder, unlawful confinement and assault with a weapon related to the attack at the jail on the outskirts of Halifax.

Campbell said in his verdicts that Ladelpha was part of the meeting to plan the attack and was seen entering the cell where the attack occurred, while McIntosh held the cell door shut during the assault.

Video seen at trial showed one group of inmates gathering around the cell, some holding the cell door, and others immediately forming a wall with their bodies to prevent correctional officers from rescuing the victim.

Morrison argued that such violence warrants a sentence to be served in a federal prison.

"It was fairly brazen. It's fair to say that everybody involved in this incident knew that every last second of it would be captured on video, and they did it anyway," he said.

During the sentencing hearings, Andrew Miller, the security risk manager at the facility, testified that over the last 10 years, he's seen a sharp rise in violence carried out by inmates. He said when he first started at the facility, assaults by one inmate against another in their common areas were a rare occurrence.

Miller said during McIntosh's hearing that inmate-on-inmate assaults now occur one to three times a week and often involve multiple inmates ganging up on another.

Billy Sparks, the defence lawyer for Ladelpha, asked the judge for a sentence of between 18 months and two years that would take into account that his client hadn't been incarcerated for violent crimes and suffers from mental illnesses.

Patrick Eagan, the defence lawyer for McIntosh, didn't provide a suggested sentence, but noted his client faces deportation to his native Barbados because of his criminal record.

Campbell said he'll provide a sentence for Ladelpha on Dec. 22 and for McIntosh on Dec. 21.

In a hearing earlier in the day, Nathan Gorham, the lawyer for Brian James Marriott -- one of two inmates still facing trial in relation to the attack -- said his client intends to plead guilty to aggravated assault.

The earlier trials heard that Marriott was among the inmates who blocked correctional officers as they tried to respond. The Crown had also argued that Marriott had a role as a ringleader who called for the attack against Anderson.

He was also facing charges of conspiracy to commit murder, attempted murder, unlawful confinement, assault with a weapon, and obstructing a correctional officer.

Marriott is scheduled to return to Nova Scotia Supreme Court to formally enter his plea on Jan. 12 before Campbell, and lead prosecutor Rick Woodburn said he intends to ask the court to have Marriott designated a dangerous offender.

Nagendran was the only inmate acquitted of aggravated assault, as he appeared to join the wall of prisoners blocking guards without having participated in the planning.

Sophon Sek, the 15th inmate accused in the case, is seriously ill, and Campbell has indicated his trial may occur at a future date.

This report by The Canadian Press was first published Dec. 7, 2021