Virus-related downturn in lobster exports to China is a blip, N.S. minister says 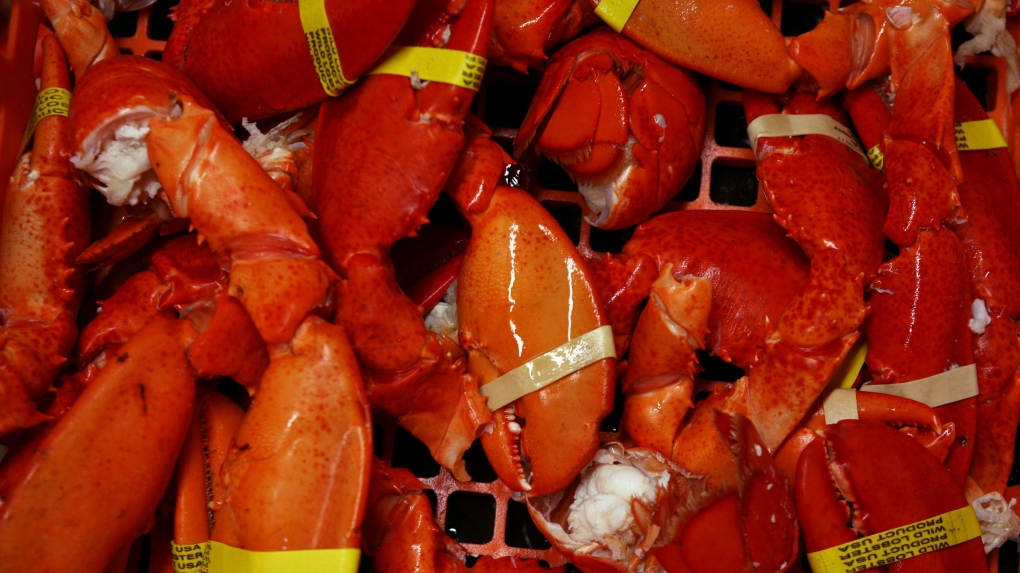 In this October 2008 file photo, cooked lobster claws and tails are seen at a lobster dealer in Portland, Maine. (AP Photo/Pat Wellenbach, File)

HALIFAX -- A sudden downturn in lobster exports from Nova Scotia to China related to an outbreak of a new form of coronavirus is a "temporary blip," the province's fisheries minister said Wednesday.

Chinese authorities have not banned imports from Nova Scotia, however markets have dried up this week as the country's tries to halt the spread of the new virus.

Fisheries Minister Keith Colwell told reporters it's still too early to say how long the market disruption will last, so the government is talking to people in the industry about contingency plans.

"This will be on a temporary basis because it's not about our lobster quality and it's not about (China) not wanting it," said Colwell, noting he discussed the situation with federal Fisheries Minister Bernadette Jordan on Tuesday.

The province sent $525-million in seafood exports to China in 2018 -- the bulk of which was lobster.

Overall, lobster sales have been booming to all markets, with provincial figures indicating total exports of just over $1.2 billion between December 2018 and November 2019 -- an increase of nearly 17 per cent over the previous 12-month period.

Colwell said the Nova Scotia lobster industry, Canada's largest, is better positioned to ride out the temporary loss of the Chinese market because of work that has been done to diversify its customer base.

"We've been really working on Europe and we are working in other parts of Asia," he said. "We are in Vietnam which is really an emerging market for us -- they are probably where China was 10 years ago."

He said the timing of the disruption isn't bad in the sense that many Nova Scotia lobster fishermen often curtail their operations during February and March because of bad and unpredictable weather.

"But it's never a good time when we stop shipping any of our products," Colwell added.

Exporter Stewart Lamont, managing director of Tangier Lobster, said there will be a "significant impact" in the short-term for companies like his because China is now the number one market in the air freight shipment of live lobster.

He said 50 per cent of the province's international air freight market had been going to China over the last seven months because of a disappointing fall catch in the United States, as well as Canada's 25 per cent tariff advantage resulting from the U.S.-China trade dispute.

However, that advantage is expected to weaken somewhat with the recent trade deal that saw China pledge to buy $32-billion in U.S. agricultural products over the next two years, including lobster and other seafood products.

"In the medium and longer term we're fairly confident it will bounce back within a month or two," Lamont said of the Chinese market. "Industry-wide we are pretty well diversified and we think we can work through it."

Lamont said his company has continued to ship lobster to markets in Europe this week and is readying a shipment to be sent to Dubai on Thursday.

However, he said lobster wharf prices have recently dropped and export prices are likely to fall as well over the next week or so as the Chinese market remains closed.

Meanwhile, Colwell announced during a short ceremony at the provincial legislature on Wednesday that Feb. 28 would become Lobster Day in Nova Scotia.

The designation is mainly a tie-in with an initiative that promotes tourism to the province's South Shore, but Colwell said it was also time to recognize people who work in an industry that is vital to the overall economy.

"It's a risky business, a hard business and hard work," he said. "It's about time we recognize what they do and what they add to the Nova Scotia economy."