HALIFAX -- A Nova Scotia centenarian who won the hearts of Maritimers back in May has completed her goal of 102 walks to raise money for the Victorian Order of Nurses, a non-profit organization close to her heart.

Joy Saunders planned to walk 0.8 kilometres 102 times before her 102nd birthday in October.

The 101-year-old Lunenburg, N.S., woman said she was inspired by the story of Capt. Tom Moore -- a 100-year-old war veteran in the United Kingdom who raised more than $55-million CAD for his country's health-care system by walking 100 lengths of his own garden.

Saunders chose to support the VON because she once worked for them and has used their services in the past.

Saturday afternoon, supporters joined Saunders in Lunenburg during her final walk as a show of support. 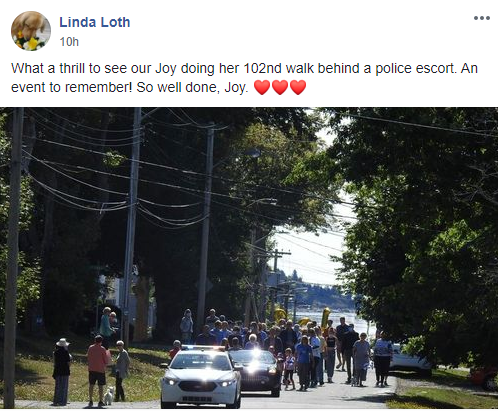 Saunders began her mission in the spring, documenting her walks and feisty personality on social media.