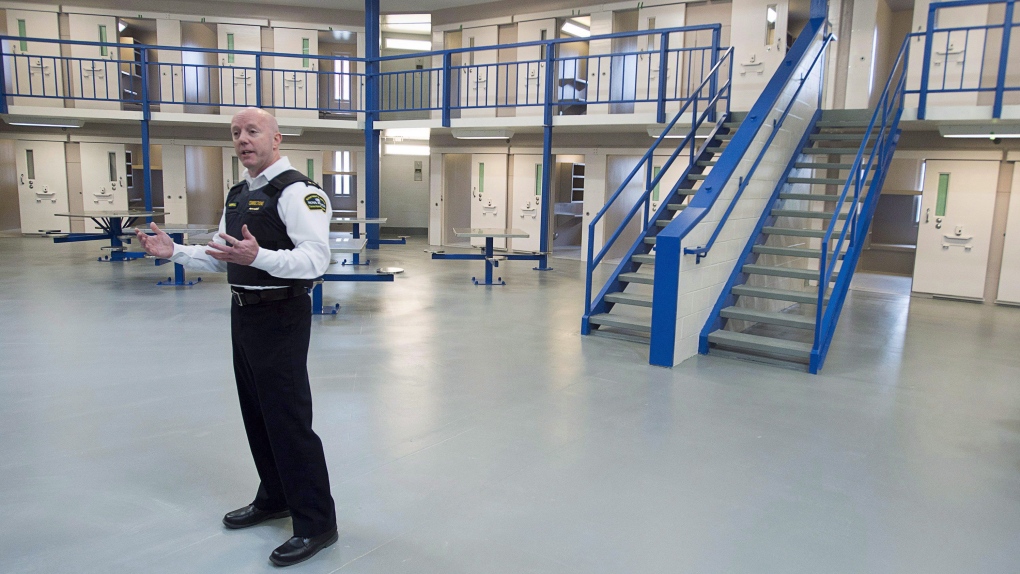 Supt. Tim Carroll guides a media tour of the Central Nova Scotia Correctional Facility renovations that feature a cluster of cells around a living area where guards will be stationed to observe and interact with inmates, in Halifax on Tuesday, May 15, 2018. (THE CANADIAN PRESS/Andrew Vaughan)

HALIFAX -- A union leader says a line of inmates initially blocked guards from approaching a man being stabbed in a Halifax jail earlier this week, leaving correctional officers traumatized and fearful over violence in the institution.

Jason MacLean said Thursday the more than 25 inmates in one block of the Nova Scotia Central Correctional Facility outnumbered correctional officers called to respond to the incident Monday evening.

The president of the Nova Scotia Government and General Employees Union said the guards' attempts to go through what he described as a "wall" of prisoners toward the attack resulted in inmates "pushing staff back."

He said when prisoners allowed guards to reach the injured man, they were only permitted to remove the man who was bleeding.

Halifax police said earlier this week they are investigating, and the man was in life-threatening condition after the attack.

MacLean said the incident is a fresh and frightening low for the institution, signalling a need for urgent consultation with the union to make the environment safer.

"The correctional officers are feeling exposed.... They feel they have no control of the facility and other units (in the jail) are emboldened," he said during an interview.

A spokesperson for the Department of Justice's Correctional Services division said in an email that the incident is "concerning" and the subject of an internal review, but declined to provide an update on the inmate's medical condition.

MacLean alleged the institution had placed too many potentially violent prisoners in the unit, where a system known as "direct supervision" places guards in the same dayroom as offenders.

MacLean said he's contacting Furey and the management of the facility and will be asking for higher staffing ratios and stricter policies on who's allowed into direct supervision units.

He's also asking for inmates to return to wearing orange uniforms, so that staff monitoring on video can more easily identify them.

MacLean is also approaching management to say if guards are called to testify about such incidents, their personal information should be protected.