War of words ignites between Nova Scotia political parties, even without legislature sitting

HALIFAX -- Without Question Period at the Nova Scotia Legislature, where's a political junkie to go to get their fix of sniping?

Worry no more -- a war of words ignited between Nova Scotia Premier Stephen McNeil and the Progressive Conservative Party on Wednesday, after an interview their leader, Tim Houston, gave on CTV Atlantic on Tuesday.

In an interview with anchor Steve Murphy, Progressive Conservative Leader Tim Houston said he has not spoken with McNeil since the COVID-19 pandemic began, and that the premier has not responded to any of his letters.

McNeil chuckled at the question before answering during an interview on Wednesday.

"Very early on, we set up a committee made up of all political parties," McNeil said. "They meet every day laying out the announcements of yesterday and answering any questions."

McNeil says he has spoken on the phone many times to NDP Leader Gary Burrill.

"He's the one who offered the suggestion of an all-party and I thought it was a good idea," McNeil said. "He called me again about another issue."

That differs from the account of the committee given by Houston on Tuesday.

NS Opposition leader @TimHoustonNS tells @CTVAtlantic he suggested the Premier put together an all-party committee to deal with the pandemic but the Premier didn't take him up on it.

McNeil also says that Houston, on the other hand, has only written letters, which McNeil says he has read.

"I've taken the suggestions from those and passed them on," McNeil said.

When asked if Houston might have better luck establishing dialogue with McNeil on the phone, the premier said: "I'm always here."

It doesn't end there.

In e-mail to @CTVAtlantic, NSPC caucus says office tried to arrange phone call between leader @TimHouston & Premier @StephenMcNeil on Mar. 22; told "Premier is too busy today." PC's say Premier's office later committed to work on it but PC's "have yet to hear from the Premier."

On March 22 our office contacted the Premier’s Chief of Staff Laurie Graham, to arrange a call between Premier McNeil and Mr. Houston.

Ms. Graham texted back saying that the Premier was too busy to speak with Mr. Houston.

They also provided a screenshot of the exchange via text message. 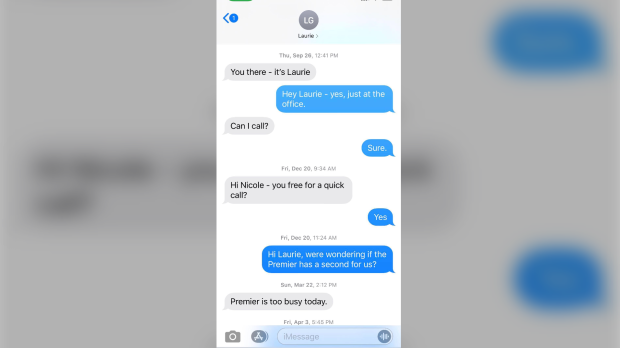