'We are optimistic': Power restored to 51 per cent of Islanders, P.E.I. announces additional financial relief

'We are optimistic': Power restored to 51 per cent of Islanders, P.E.I. announces additional financial relief 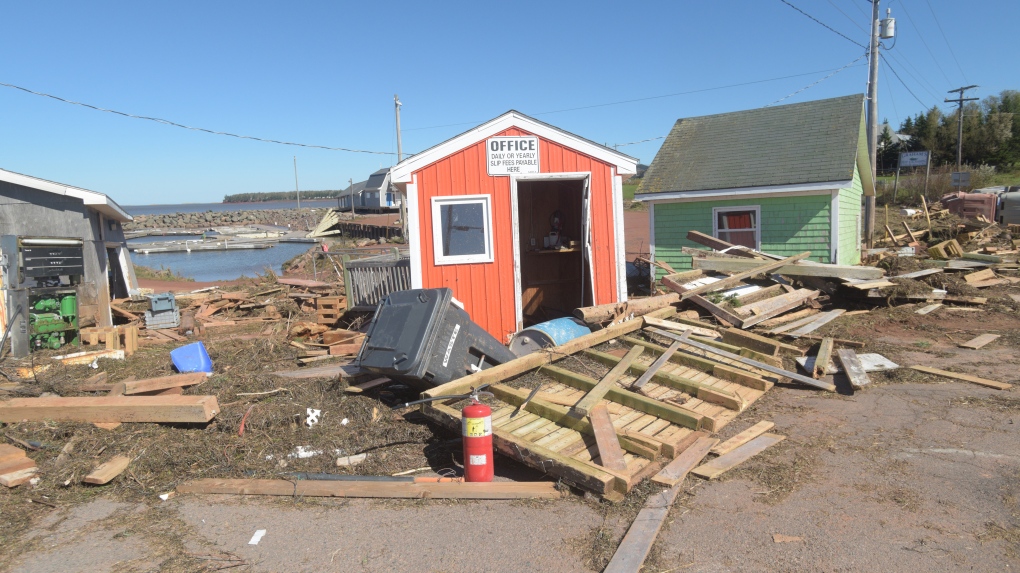 The wharf is damaged at Stanley Bridge, P.E.I. on Sunday, September 25, 2022. After hammering Atlantic Canada, post-tropical storm Fiona has moved inland in southeastern Quebec, with Environment Canada saying the storm will continue to weaken as it tracks across southeastern Labrador and over the Labrador Sea. (THE CANADIAN PRESS/Brian McInnis)

Over 50 per cent, about 42,000, of Prince Edward Island residents and businesses have had power restored as of Thursday.

The per cent of Islanders with power by region is as follows:

Maritime Electric says, although exceptional progress is being highlighted across the province, the utility wants to remind islanders that just because one house has power, does not mean others in the area will.

"They have power, but that does not mean every customer in your community has power," said Kim Griffin, sustainability and corporate communication manager with Maritime Electric.

As of Thursday, some assessments are still being done, which is why officials say they are still unable to provide concise estimated restoration times for all islanders.

The Canadian Armed Forces and the province’s forestry department have been assisting 137 power crews on the ground Thursday. Additional crews will be on the road Friday.

Over 197 crews will be on the island in the coming days while recovery efforts continue.

While social assistance programs are open for applications, additional relief for residents without insurance and seasonal employees will be released Friday, according to the premier.

"It's an overwhelming task at the best of times to be everything to everybody, but that's even more difficult in the time of crisis, but I do want to tell islanders that we are doing everything we can for as many as we can and as fast as possible and we do it knowing it is a very imperfect process," said King.

The province says further information will be released Friday in regards to programs for residents who are without insurance.

As for seasonal employees who may be out of work earlier than anticipated, funding is being established to aid in the hiring process.

"It's a program that will help island businesses, that will help hire more people quickly, government will be there in a significant way to make sure that can happen," King added.

All loan payments will also be deferred by one month for clients of Finance PEI, Island Investments Inc., and PEI Century Fund due to the impacts of Fiona.

"We know many businesses remain closed or are operating at a reduced capacity due to damages or a loss of power. We hope this deferral helps reduce some financial stress during these challenging times," said Minister of Economic Growth, Tourism and Culture Bloyce Thompson, in a news release Thursday.

During Thursday’s press conference, King said more than 800 additional insurance adjusters are on Prince Edward Island to process as many claims for residents as quickly as possible.

The province has also expanded its funding criteria for those who lost ships to also include self-employed islanders, and those in the 'gig economy.'

"In the days ahead we will continue to try to figure out who needs help the most and try to get our programs tailored to get out to islanders as quickly as possible," said King.

Those who are in immediate need are asked to call 211 or contact the Canadian Red Cross. The province is now in a cell partnership with the Red Cross therefore, all communities are able to call 1-800-863-6528 to register and be directed to have needs met based on assessments.

FBI Director Chris Wray is raising national security concerns about TikTok, warning Friday that control of the popular video sharing app is in the hands of a Chinese government "that doesn't share our values."

A U.S. woman was killed and four other passengers injured when a massive wave struck the Viking Polaris cruise ship while it was sailing toward the port of Ushuaia in southern Argentina on an Antarctic cruise, authorities said.

BoC expected to end year off with one more rate increase, likely to pause hikes soon

The Bank of Canada is expected to conclude a historic year marked by high inflation and aggressive monetary policy tightening with one more interest rate hike on Wednesday.

Myanmar's military-installed government has sentenced more critics to death, bringing the total to 139, and is using capital punishment as a tool to crush opposition, the UN high commissioner for human rights said Friday.

Prince William capped a three-day visit to Boston by meeting with President Joe Biden to share his vision for safeguarding the environment before attending a gala event Friday evening where he sounded an optimistic tone about solving the world's environmental problems through "hope, optimism and urgency."

Pentagon debuts its new stealth bomber, the B-21 Raider

America's newest nuclear stealth bomber made its debut Friday after years of secret development and as part of the Pentagon's answer to rising concerns over a future conflict with China.