‘We Bloom Amid the Snow’; emotional video recaps 2020 in Nova Scotia 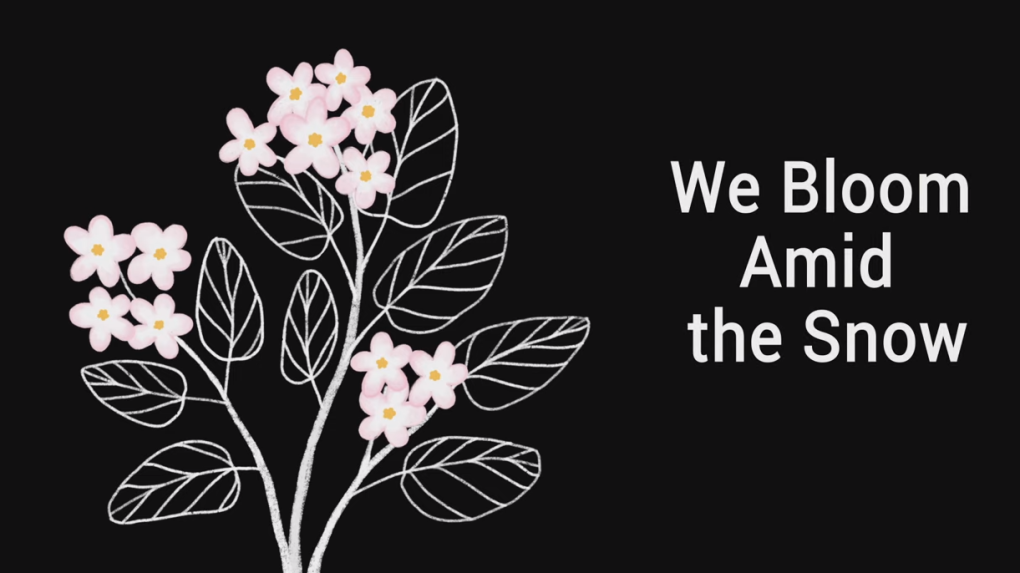 Nova Scotia’s provincial government has posted a poignant recap of a year that the province’s residents will likely never forget. (Photo via YouTube / Nova Scotia Government)

HALIFAX -- Nova Scotia’s provincial government has posted a poignant recap of a year that the province’s residents will likely never forget.

The seven minute, 46 second video posted to the provincial government’s YouTube recaps the events of 2020 in video, photos and voiceover - from the arrival of the COVID-19 pandemic, April’s mass shooting, and several other tragedies that occurred this past year, to the highs of businesses reopening, families reuniting, graduations, and the province coming together in the face of tragedy.

“As the year draws to a close, we remember the events that brought us together, and kept us apart in 2020. We are thankful for the Nova Scotians who stepped up to help their neighbours and communities through tough times. We remember those who are no longer with us. We continue to practice healthy habits and look out for one another,” states the video's description.

The video begins with white text over a black background, introducing the premise that the Nova Scotian symbol of the ‘Mayflower’ suggests high achievement in the face of adversity.

“The humble evergreen blooms amid the last remaining snows of winter”, read the introduction, before dissolving to the title card ‘We Bloom Amid the Snow’.

As dates are revealed on screen in chronological order, narration from news reports from around the world reveals information about the coronavirus pandemic, at a time when so little was known about the virus that would impact lives everywhere.

The calendar comes to an abrupt halt on the date of March 14, as N.S. Premier Stephen McNeil announces the first three presumptive cases of COVID-19 have arrived in the province.

Just over a week later, McNeil declared a provincial state of emergency ‘effective immediately’ on March 22.

The video then flashes quick scenes from the early days of the pandemic. Closed businesses, museums and schools, eerily quiet streets and airports.

McNeil makes another appearance on April 3, when the Premier first punctuated one of his news updates with what became a viral provincial rallying cry - “Stay the Blazes Home”.

An emergency alert warns Nova Scotians to stay home to protect themselves and others, followed by more visuals of quiet streets and public places.

The music then takes an uplifting turn, as businesses are shown pivoting their operations to produce much needed hand sanitizer and personal protective equipment for frontline workers, as local business owners and residents send messages of thanks.

A selection of images from Halifax’s Northwood long-term care facility show signs of support posted outside the campus where 53 of the province’s 65 COVID-19 related deaths occurred.

The music and video fades as the video transitions to another tragedy that shook the hearts of Nova Scotians; a touching display of images from the quiet community of Portapique, N.S., where on the night of April 18, a gunman began a 13-hour rampage throughout northern and central Nova Scotia, killing 22 people in the largest mass shooting in Canadian history.

The province’s rallying call of ‘Nova Scotia Strong’ makes its first appearance, amid tributes of Nova Scotia tartan, flowers and signs, remembering the victims, including RCMP Const. Heidi Stevenson, a 23-year veteran of the RCMP, killed in the line of duty on April 19 while responding to the active shooter.

Unfortunately, tragedy continued to hit Nova Scotia hard this spring; a Cyclone helicopter from a Halifax-based navy vessel off Greece crashed on April 29, claiming the lives of six service members, including Sub-Lt. Abbigail Cowbrough, a Dartmouth resident whose remains were returned home during a solemn procession on May 11.

On May 17, Canadian Snowbirds Capt. Jenn Casey died in a jet crash in Kamloops B.C.,, just two weeks after the Snowbirds began a cross-country tour by flying directly over Portapique, N.S. Thousands lined the streets of Casey’s hometown of Halifax on May 24, as a procession throughout the city honoured the young officer as she returned home for the last time.

“So much death, so much sadness and it’s hard to cope, but we have to. It’s who we are, we are resilient and we are strong,” says a voiceover from Premier Stephen McNeil. “We need to grieve and we need to feel. To the families, take your time. To the rest of us, we need to honour those whose lives were lost, by continuing to be proud Nova Scotians and support one another.”

A spring filled with tragedy turned to a summer filled with promise, as signs of warm weather are coupled with images of businesses reopening and Nova Scotians volunteering as the province’s COVID-19 case numbers declined.

“By acting together, having a strong positive sense of community, and by knowing we are doing these things we are actually caring for each other, we will get through this,” said Dr. Robert Strang, Nova Scotia’s Chief Medical Officer of Health.

One highlight of 2020 was when the household bubbles were ‘burst’ on June 18, allowing families to reunite after nearly three months apart, leading to touching images of grandchildren finally being able to hug their grandparents again.

On July 3, Nova Scotia and the other three Atlantic provinces created the ‘Atlantic bubble’ allowing unrestricted travel between the four provinces, and creating opportunity for more families to reunite. While the Atlantic bubble ended on Nov. 26, there is hope that 2021 will see it return.

The summer of coming together continued, as the Black Lives Matter movement reached Nova Scotia with large rallies and public shows of support held across the province.

June also saw a graduation season unlike any other, with drive-by graduation ceremonies and other creative displays of congratulatory wishes to students who had experienced an unprecedented semester of education.

“I am proud of you for adapting during this unprecedented time. On behalf of all Nova Scotians, congratulations,” says Premier McNeil in a voiceover.

“I am so proud of the people of this province coming together to support each other. We’ve got this. And when this has passed, let us say that love spread more quickly than any virus ever could,” says the final voiceover from Strang, as the video concludes with images of the Pfizer COVID-19 vaccine arriving in Nova Scotia.

The final shot of the video displays a banner reading ‘In This Together’, as Nova Scotians look to 2021 with a renewed sense of hope and optimism.