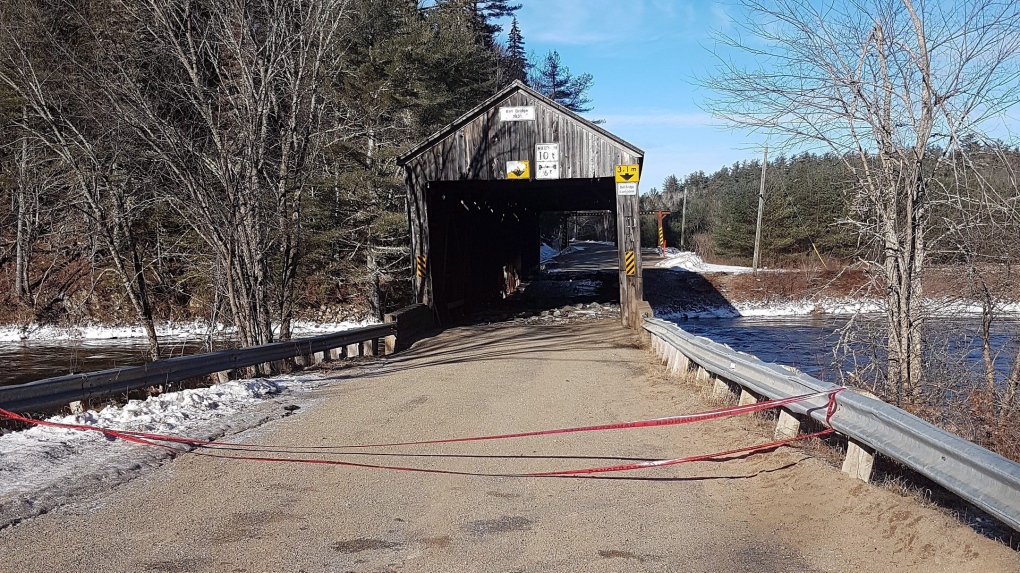 Damage to the Bell Bridge in Hoyt, N.B. is seen in this undated handout photo. (THE CANADIAN PRESS/HO, Debbie McCann)

HOYT, N.B. -- New Brunswick's tourist-friendly stock of picturesque covered bridges continues to quickly decline, with the province acknowledging it cannot save an 87-year-old bridge ravaged over the weekend by ice and flood waters.

"The Bell Bridge is not salvageable. It took a significant amount of water and ice. A lot of the boards were removed with the water," Transportation Minister Bill Fraser said Monday as he assessed the damage in Hoyt, roughly halfway between Fredericton and Saint John.

New Brunswick reportedly had about 340 covered bridges in the early 1940s, but now has just 59. They remain a major part of tourism marketing for the province -- which calls them "kissing bridges" and offers a map of them.

Just last week, a Sussex-area bridge was damaged by a motor vehicle accident.

And last fall, the 104-year-old Hammond River Bridge had to be removed due to extensive wood rot. Attempts to repair it ended when a large excavator loaded with lumber crashed through the bridge deck. It is being replaced with a new modular bridge.

Fraser said Monday crews will have to quickly replace the Bell Bridge with a temporary or permanent structure.

"We have 17 families on the other side of the bridge that have very limited access. The temporary road that we have in is an old woods road that requires four-by-fours," Fraser said.

Hoyt resident Debbie McCann said it's devastating news -- the bridge is a significant landmark in the community and a draw for tourists.

"This one was built in 1931, so you can only imagine the number of floods we've had in that period of time that it survived," she said.

"It is quite meaningful to me personally, because as kids growing up we would spend entire summers hanging out at that bridge."

McCann said there is a swimming hole at the bridge, and it would often be the location for corn boils and barbecues.

It is one of three covered bridges in the community that's surrounded by mountains and rolling hills.

She said the changing weather of recent years has seen more frequent flooding of the numerous water courses that converge there.

"We've engaged with the Department of Tourism, Heritage and Culture to help us work on a draft policy for our covered bridges," Fraser said.

"I've also asked for an assessment on all our covered bridges. That's going to take some time to determine what work they need. They've done about a dozen so far," he said.

New Brunswick is also home to the world's longest covered bridge, in Hartland.

The 390-metre Hartland Bridge opened in 1901 but wasn't covered until 20 years later.

According to a New Brunswick tourism site, "The Longest Covered Bridge in the World is, like all covered bridges in New Brunswick, a 'kissing bridge.' Kissing bridges date back to the years of horse and wagon traffic, when young men 'trained' their horses to stop about half way across the bridge, wait while the couple shared a couple of kisses, and then continue to the other side of the bridge."

Premier Brian Gallant announced last week that his government plans to spend $670 million in capital work on the province's 3,500 bridge structures over the next five years.