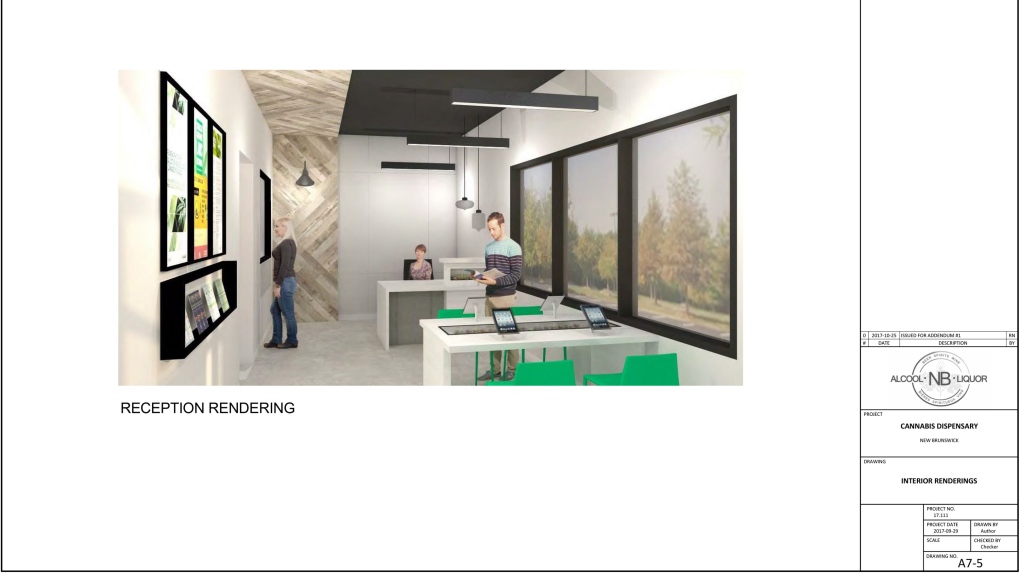 This is what the end of cannabis prohibition will look like in New Brunswick: An upscale showroom with black ceilings, grey walls and a once-illicit drug displayed in brightly lit glass cases, as shown in this artist rendering. (THE CANADIAN PRESS/HO)

This is what the end of cannabis prohibition will look like in New Brunswick: An upscale showroom with black ceilings, grey walls and a once-illicit drug displayed in brightly lit glass cases.

"That's where the product will be kept, in locked glass cases, and from there the transaction will be made and proceed to a point-of-sale area."

With less than seven months to go before recreational marijuana is legalized, provinces and territories are scrambling to come up with plans to sell cannabis.

But only scant details have emerged about what the retail experience of buying legal weed will be like.

Ottawa lawyer Trina Fraser predicts it won't be much akin to buying a bottle of scotch.

"Think more like tobacco as opposed to alcohol," she says. "It's not going to be like you'll walk in and there are samples."

New Brunswick's retail scheme -- which appears to be the most advanced among the provinces -- offers an early peek at how consumers will buy the drug.

The province has issued construction specs featuring a standalone brick store with a black awning featuring the CannabisNB logo.

But despite the upscale interior, the entrance will reflect governments' cautious embrace of cannabis: Stern security guards will swipe identification cards to confirm customers are 19 and over before allowing them to step inside.

Beyond this forbidding first interaction, staff in a reception area with glossy white tables and bright green chairs will explain safe and responsible recreational cannabis use, harm reduction and the laws of the land. Formalities taken care of, customers are escorted into a gleaming 3,000 square-foot weed retail store.

The first customer will walk through the doors in July, more than a year after Prime Minister Justin Trudeau fulfilled a campaign pledge and introduced legislation to legalize the recreational use of marijuana.

In a single day, buying cannabis will go from a black-market purchase, steeped in surreptitious dealings and paranoid dealers, to a modern shopping experience. A drug long condemned as the stuff of street gangs, organized crime and outlaw motorcycle clubs will be branded, packaged and displayed in stores.

A once-clandestine act will become a government-sanctioned transaction, complete with a healthy excise tax and consumption taxes on top.

While it appears the distribution of wholesale cannabis and online sales will be largely government-controlled, provinces and territories have opted for one of three retail models for over-the-counter sales: Private, public or a hybrid of the two.

Alberta, Manitoba and Newfoundland and Labrador have said the private sector will operate cannabis retail outlets in those provinces, while British Columbia has decided on a hybrid retail model.

Saskatchewan has hinted at a private model, but has yet to confirm its retail plans. Yukon suggested it may initially limit sales to government outlets, but as with the Northwest Territories and Nunavut, the territory is still in public consultations.

Governments are also still hammering out exactly how much the product will cost, how much it will be taxed, the minimum age for buyers, where smoking pot will be legal and driving impairment rules.

"This is basically like the entire country turning 19 at the same time," says Rosalie Wyonch, policy analyst with the C.D. Howe Institute in Toronto.

"Education is going to be a large part of the customer service of these retail stores. Chances are most consumers will not be particularly familiar with the product and could be completely nervous."

While some budtenders, as they're often called, may essentially hold the hands of the uninitiated -- walking them through cannabis awareness, education and consumption tips -- staff at other stores could offer a more bare-bones experience.

"For the provinces that will go Crown corporation for retail, it's probably going to be a very polished experience," Wyonch says. "Someone who has never thought of smoking weed could walk into the store and feel comfortable. There would probably be significantly more amounts of customer service staff to help you with products and explain things."

Provinces that opt for a private retail model, however, will likely have a full spectrum of service tied to price, she says.

"There might be very nice stores that give a really good experience -- and are slightly more expensive -- and there will potentially also be a little hole in a wall down a side street where you don't get very much customer service, you don't get to ask any questions, but it's pretty cheap and the people that were used to dealing with the black market would be fine there," Wyonch says.

Given the main goal of legalization is to stomp out the black market, she says private retail could render the black market obsolete more quickly. Wyonch says private stores would create a more competitive marketplace and lead to better geographic coverage than government-built stores.

The Liquor Control Board of Ontario, for example, plans to open 40 stores in 14 municipalities next July, a number she says is unlikely to meet the full market demand.

However, consumers in all regions will also be able to access marijuana online.

But in order to eliminate the black market, buying pot will have to be convenient, says Jenna Valleriani, a University of Toronto PhD candidate in sociology and addiction studies.

"For people who have purchased from a friend or acquaintance for 15 years, those are really hard purchasing patterns to shift," she says. "If you did have to go to a retail shop and wait in line for an hour, that's likely going to deter people from going there."

Even in the provinces with a private retail model, she says licensing operators could make for a sluggish rollout of stores.

"It's going to unroll over time and what that actually looks like for consumers is going to depend on what province or territory you're located in," says Fraser, a partner at Brazeau Seller LLP, who specializes in cannabis law. "We're going to see an ongoing evolution of shifting from a black or grey market to a legal one."

"I assume there is going to be some type of menu available to choose from," Fraser says. "I don't suspect anywhere in Canada you'll have a legal retail store that will look like a dispensary where you walk in and can see and in some cases smell the product."

As with prescriptive alcohol rules that followed the end of prohibition, strict cannabis laws will likely loosen over time as consumers become more accustomed to the drug.

But Valleriani says the "stoner stereotype" could persist for some consumers.

"I think there will be a lot of residual stigma leftover," she says. "I'm not really convinced, for example, that an elementary school teacher is going to want to be seen walking out of a cannabis shop."

Valleriani calls some cannabis legislation being proposed unnecessary, such as New Brunswick's plan to make it mandatory to keep the drug under lock and key.

"There is absolutely some hysteria around cannabis in the home and young people," she says, adding that fears legalization will lead to dramatically higher consumption are unfounded.

"I think we can expect a small uptick in adult use and then it will level off," Valleriani says. "There will initially be a bit of a spike because it's a novelty for many people."

One sector of the cannabis market that is expected to see growth in Canada is marijuana-infused food, or edibles.

Sylvain Charlebois, a Dalhousie University professor of food distribution and policy, recently published a report that helped push Ottawa to include the legalization of edible cannabis products in Bill C-45.

"There is a good portion of the Canadian population that would be willing to try edibles," he says, pointing to his research that shows of the 68 per cent of people in favour of legalization, 93 per cent would try an edible product. "That's a lot, so we need to be ready for this. Not adding edibles to the legislation may have exposed consumers to unwarranted risks."

But don't expect a cannabis bakery around the corner come July. The legalization of edibles, like brownies and muffins, will lag by a year.