What the jury didn't hear at William Sandeson's murder trial 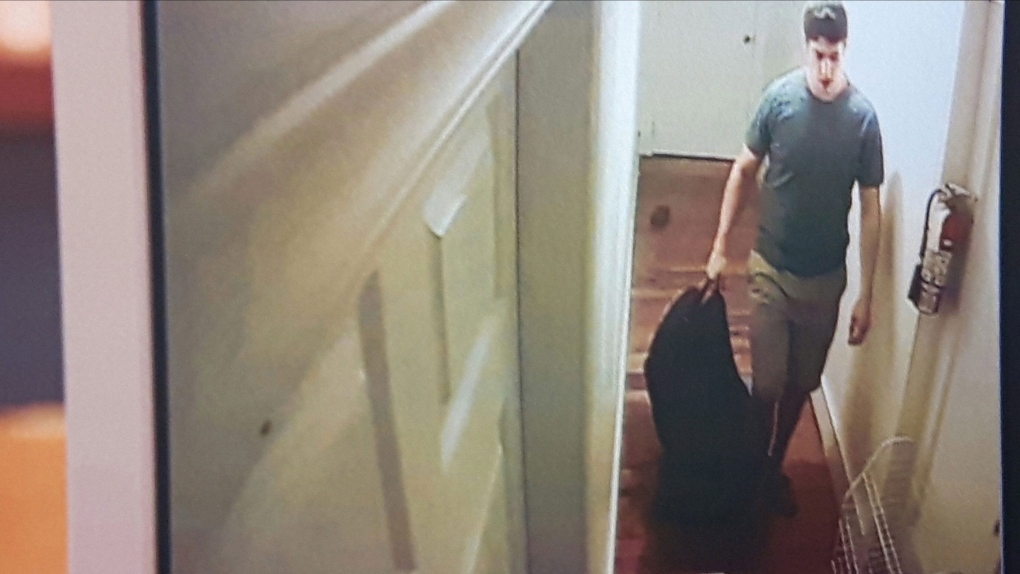 This still photo shot off surveillance tapes seized from William Sandeson's apartment shows the last known moments of Taylor Samson's life, released in court, Thursday, May 4, 2017. It shows the moment Samson went to Sandeson's apartment to sell 20 pounds of marijuana but was never seen leaving, and was reported a missing person the following day. Sandeson is on trial for the first-degree murder of Samson. (THE CANADIAN PRESS/Kieran Leavitt)

HALIFAX -- The jury in medical student William Sandeson's first-degree murder trial retired to deliberate Thursday without hearing that the defence had sought a mistrial after a bombshell surprise.

About halfway through the trial, Sandeson's lawyers said they had just learned that a private investigator who was working for them had facilitated meetings between two key witnesses and police.

The defence argued those meetings led the witnesses to give new statements to police that further implicated Sandeson in the Aug. 15, 2015, killing of fellow Dalhousie student Taylor Samson.

The lawyers argued it contravened solicitor-client privilege, and was grounds for a mistrial or exclusion of the witnesses' evidence.

During many hours of hearings away from the jury, the complex issue unfolded, but it can be reported on now that the jury has been sequestered.

Sandeson is accused of killing Samson during a drug deal over 20 pounds of marijuana in August 2015. Samson's body has never been found.

At issue was the testimony of Sandeson's two track-and-field teammates, Pookiel McCabe and Justin Blades, who were across the hall from Sandeson's apartment the night Samson, 22, was allegedly killed.

They told Webb they heard a gunshot, and went over to see a body covered in blood and Sandeson, 24, running around saying he had to clean up.

But that didn't match what they had originally told police, said Webb -- they said they hadn't seen or heard anything that night.

Webb said Blades believed Sandeson was connected to the Hells Angels and feared for his life. Webb, a former RCMP officer with decades of experience, told him Sandeson being connected was impossible.

He offered to facilitate a meeting with police so Blades could give a new statement.

Webb said Blades was emotional and distraught over what he saw.

"He was in such a messed-up situation," said Webb.

"I was motivated by helping this young guy get his life back on track."

Webb, who also told police that they should speak to McCabe again, had signed a confidentiality agreement with his firm, Martin and Associates Investigations Inc.

Defence lawyers said the late revelation of these communications went against the Crown's obligation to disclose evidence.

Justice Josh Arnold denied their bid: "I am not inclined to declare a mistrial in this case."

He said the defence could recall any witnesses they wanted to try to remedy the situation, but they chose not to.