Where the streets have explorers' names, some Halifax residents call for change 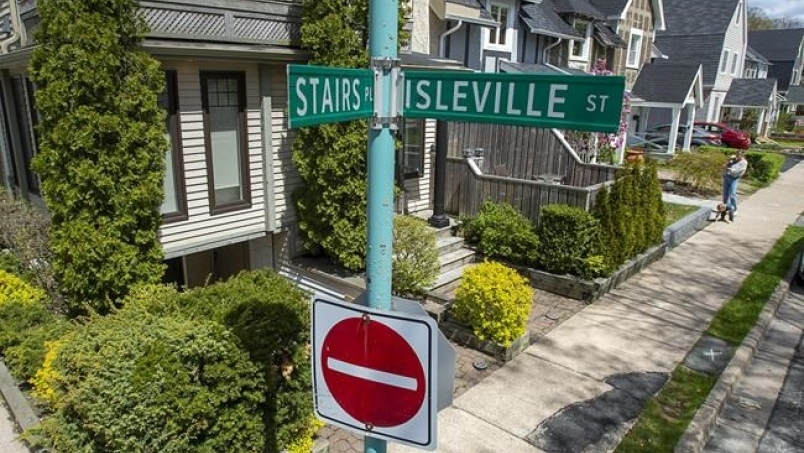 A sign marks Stairs Place in the Hydrostone district in the North end of Halifax on Thursday, May 13, 2021. The street was named for William Grant Stairs, a Canadian explorer from Halifax who helped lead some of the most controversial expeditions through the African continent. THE CANADIAN PRESS/Andrew Vaughan

HALIFAX -- When builders created Halifax's distinctive Hydrostone neighbourhood more than a century ago, they chose to honour celebrated explorers. There are streets named after William Grant Stairs, Christopher Columbus, John Cabot and Henry Morton Stanley, among others.

But now some residents are taking a closer look at the legacies of the men the streets are named for, part of a national trend examining whether people honoured on the country's maps are worthy of celebration.

"We live today in a society that does not honour explorers and what they did," Frances Early, a retired Mount Saint Vincent University history professor, said in a recent interview. "We live in a society that understands that we live on unceded territory of the Mi'kmaq people. If we are going to commemorate, we need to commemorate appropriately."

Early lives on Stairs Place in the Hydrostone, named after the Halifax-born explorer who was instrumental in some of the most violent expeditions across Africa. A few blocks over is Columbus Place, which is just down from Cabot Place.

She said the street names weren't chosen by the city or its citizens but by the construction company that built the housing after much of the area had been levelled by the Halifax Explosion in 1917. It was a time when the military town of Halifax was enamoured with all things British and imperial.

"Many of the streets are named after explorers to honour white explorers, and it provoked absolutely no discussion," Early said. And as a local figure, Stairs made for a great addition alongside the likes of Columbus and Stanley, a British explorer of Central Africa.

Jonathan Roberts, a history professor at Mount Saint Vincent University in Halifax, said in a recent interview that Stairs was a leading figure in several trips to attempt to "pacify" parts of Africa. Stairs' journals outline the strategy he adopted on his travels, which included ambushing villages and killing thieves who stole from his encampment.

Like Early, Roberts wants the city to reconsider the names of Stairs Place and Stairs Street. In April, he went to the neighbourhood to shoot a video in which he recounts the life and legacy of the colonialist. In it, Roberts reads a passage from Stairs' journals, which were published after his death in 1892.

"It was most interesting lying in the bush and watching the natives quietly at their day's work ΓÇª all as it was every day until our discharge of bullets, when the usual uproar and screaming of women took place," the journals read.

Roberts and Early's efforts reflect a growing conversation around names and the place they have in society, said Lauren Beck, a professor of Hispanic studies at Mount Allison University in New Brunswick. She said the "moral anxiety" around names has shifted over time with our values.

Beck is tackling the issue in her upcoming book, "Canada's Place Names and How to Change Them," which she expects to see published in 2022. The book looks at names across the country through racialized and gendered lenses.

In a recent interview, Beck said some of the earliest names in Canada were informed by Christianity and were often named after saints by early explorers and settlers. "The landscape of the Americas not only becomes Christianized in many ways, but also quite masculine in a European sort of way," Beck said of the early development of Canada.

In her book, Beck said she will address how names are given, the power to legitimize and maintain a name and a strategy to change names in a way that doesn't alienate too many people.

"Many of the names on our maps, when they do celebrate people, many of those people are wealthier people, or they're politicians who have a very specific role in our society," Beck said. "What would we call our places if we were given the opportunity to make them welcoming and inclusive, reflective of the population, rather than just one demographic?"

Last year in Halifax, a task force recommended the permanent removal of a statue dedicated to city founder Edward Cornwallis and the renaming of a street and park honouring him. The task force concluded public commemoration of Cornwallis, the British officer accused of practising genocide against the local Indigenous population, is incompatible with current values.

Coun. Lindell Smith, whose district includes the Hydrostone neighbourhood, said in an interview Friday that concerns about street names in the area have not been put to council. He said he supports replacing the explorers' names but still needs to get feedback from residents.

"We've gone through processes where we've looked at the historical context of street names and asset names, so it's not a process we don't know how to do," Smith said of the city. "I think it might be a good time to have those discussions if they're coming forward."

For Early, the Hydrostone street names represent values that are no longer held by the people of Halifax.

"What does commemoration signify? Why do we name streets and buildings after people?" she asked. "We do this because at any given moment, we are acknowledging people or events that we respect or want remembered in our society."

"Nothing stays the same, does it?" she added. "Society moves on."

This report by The Canadian Press was first published May 16, 2021.