NORTH SYDNEY, N.S. -- A grass fire in North Sydney, N.S. has the local fire department reminding the public about the importance of fire safety.

The department says they've already received dozens of calls throughout the Cape Breton Regional Municipality regarding grass fires this year.

"It's exhausting, to say the least," said Sean O'Connell, a volunteer firefighter. "We start usually around 1 p.m. in the afternoon and we've been out at 12:30 or 1 o'clock in the morning. You have to get out of bed to go put out a grass fire someone carelessly lit."

The firefighters say each grass fire call not only ties up manpower, but equipment and other resources as well. They also say it has the potential to create a much more serious fire.

A recent picture has members of the fire department reminding people about the dangers these fires also have to wildlife.

The picture that struck a nerve with many members shows a red fox with a scorched tail, caught in the middle of a grass fire.

"It was very emotional. We had a lot of comments," said Chief Lloyd MacIntosh,with the North Sydney Fire Department. "It kind of spurred us to action. A lot of people were commenting on the fate of the fox and the needlessness of grass fires. It just reaffirmed the point of grass fires being a total waste of time."

According to MacIntosh, the fox was in its den protecting its young when it got caught in the fire.

The incident sparked an idea among the firefighters, who decided to make signs and place them in areas where grass fires usually occur.

"They are designed to aim at younger people," said MacIntosh. "We realize it is not just young people that light grass fires, adults do it too for a number of reasons, but this is just one part we want to do to help prevent grass fires." 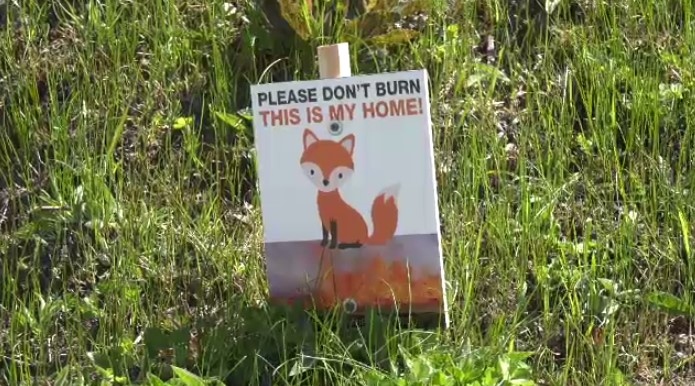 Sean O'Connell, who just recently joined the North Sydney Fire Department as a volunteer firefighter, helped place the new signs around the community.

"As we were putting them out, people were stopping and reading them and asking questions about the signs," said O'Connell.

Members of the fire department say they plan to continue their new campaign next year.