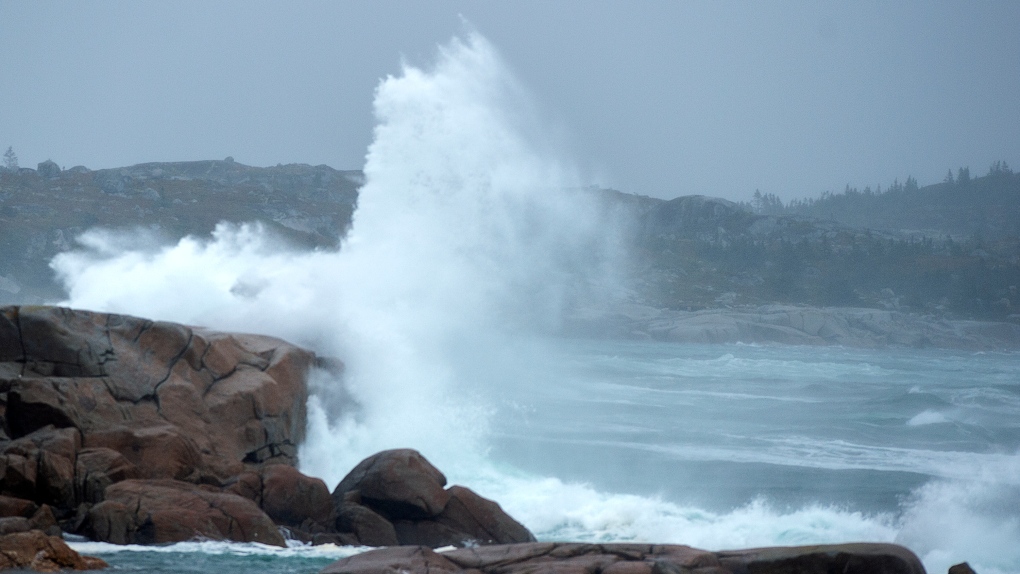 A powerful weather front associated with a low centred in northern Quebec will sweep across the Maritimes Wednesday night into Thursday.

The front will drive a strong pressure gradient in front of it which will in turn create a high and gusty southerly wind. Peak gusts of 60 to 90 km/h will arrive in western New Brunswick and southwestern Nova Scotia by late Wednesday evening. 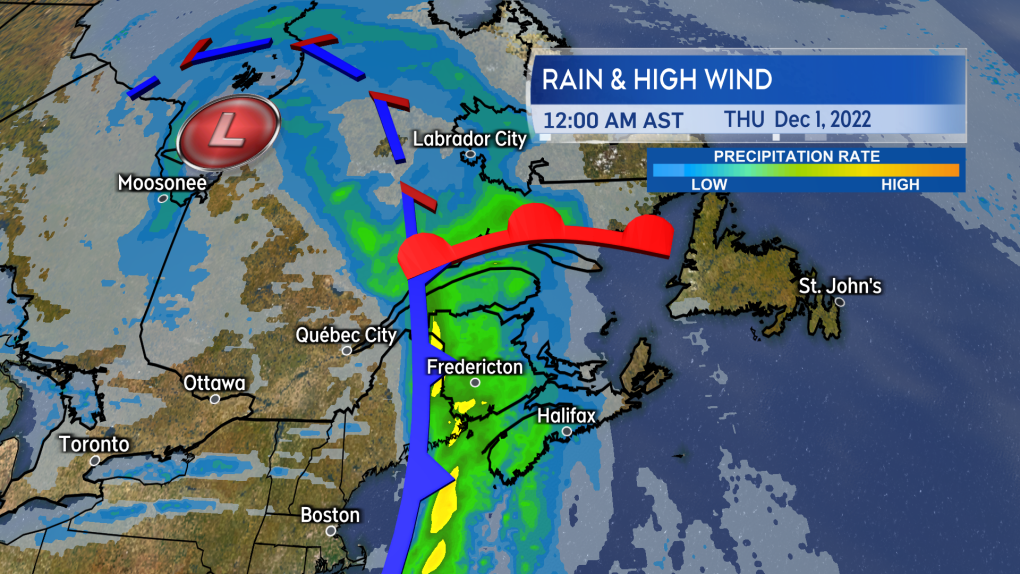 A cold front out of the west brings a rainy and windy close to the month of November.

Overnight the strong wind will shift to eastern New Brunswick, eastern Nova Scotia, and Prince Edward Island. Peak gusts at higher terrain and exposed areas of the coast could hit 100 km/h. Gusts in northern Inverness County, Cape Breton could reach 130 km/h Sunday morning due to the topography of the Highlands.

The strong wind gusts could cause isolated power outages and damage holiday decorations.

Marine Atlantic has an advisory out saying that the North Sydney, N.S., to Port aux Basque, N.L., ferry travel could be impacted Wednesday night and Thursday. The Confederation Bridge is advising that traffic restrictions may be in effect Wednesday night into Thursday morning. 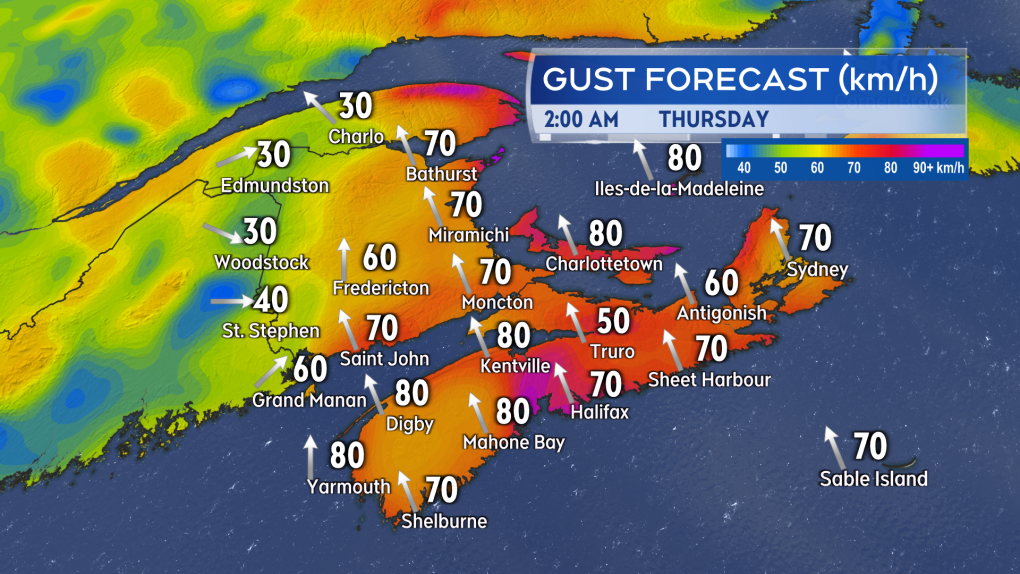 Southerly winds peak with gusts 60 to 90 km/h late Wednesday night and early Thursday morning. Exposed areas of the coast could hit as high as nearly 100 km/h.

Thursday morning, the wind becomes west with gusts coming down into a range of 40 to 60 km/h for all except Cape Breton.

Cape Breton will remain in the strong south wind until early Thursday afternoon after which the switch to the west wind will take place. The west wind will return colder air to the Maritimes and temperatures Thursday night and Friday will be chilly again.

This will be the 4th high-wind event of the month. The three previous occurred on Nov. 8, Nov. 12, and Nov. 26. In this case I’m defining a high wind event as one that brought widespread gusts of 70+ km/h to the region. 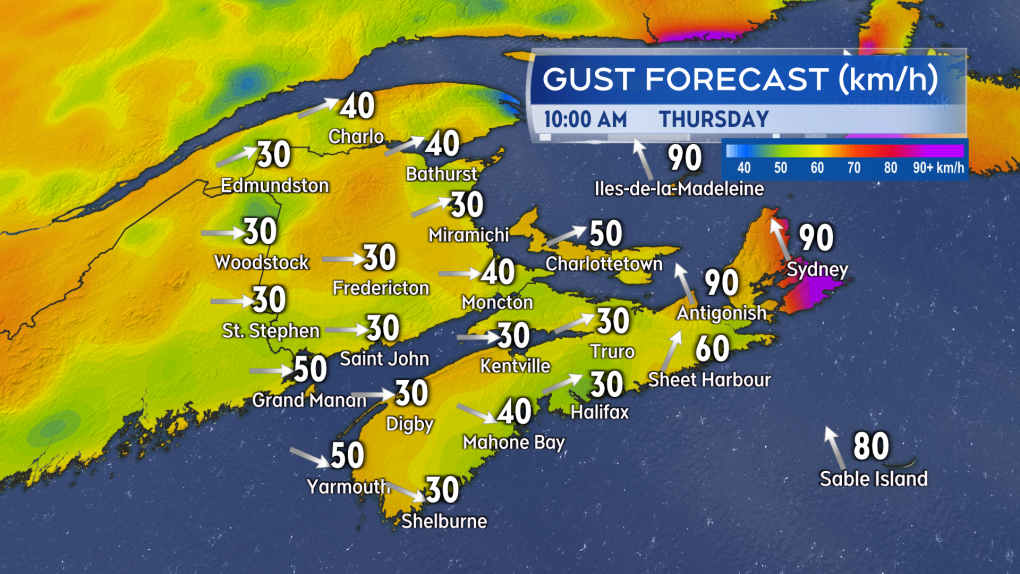 Winds turn west and diminish Thursday morning except for Cape Breton which will see the change happen Thursday afternoon. The west wind will be gusty and bring colder air back into the region.

There is no need for snow shovels with this event. While some initial snow will fall in northern New Brunswick, a turn to rain is expected Wednesday evening.

Rain will total 10 to 40 mm for much of the Maritimes. Higher amounts of 40 to 60 mm are possible near the Bay of Fundy coastline in New Brunswick, the Atlantic coastline of Nova Scotia, and in Cape Breton. 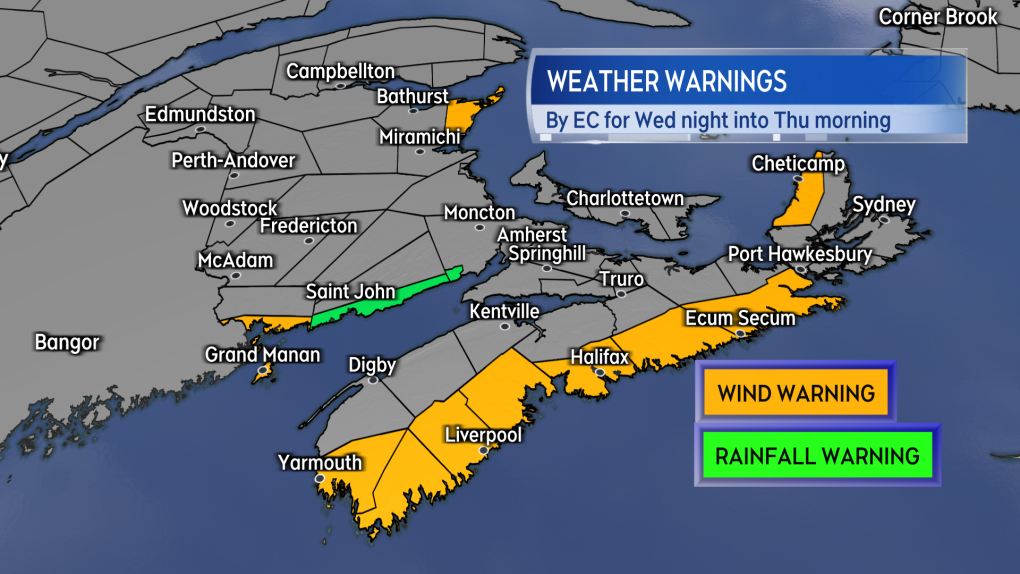 Wind and Rain Warnings have been issued for parts of the Maritimes. The remainder of the region is under a Special Weather Statement.

As of Tuesday afternoon, a Rainfall Warning has been issued for the Bay of Fundy coastline of New Brunswick. Wind Warnings are in effect for the South Shore, Halifax County, and Eastern Shore of mainland Nova Scotia as well as northern Inverness County, Cape Breton.

A Special Weather Statement remains in effect for the remainder of the region advising the public to monitor the forecast in the event further warnings are issued.

A new study that analyzes data from more than 50,000 amateur stargazers finds that artificial lighting is making the night sky about 10 per cent brighter each year.