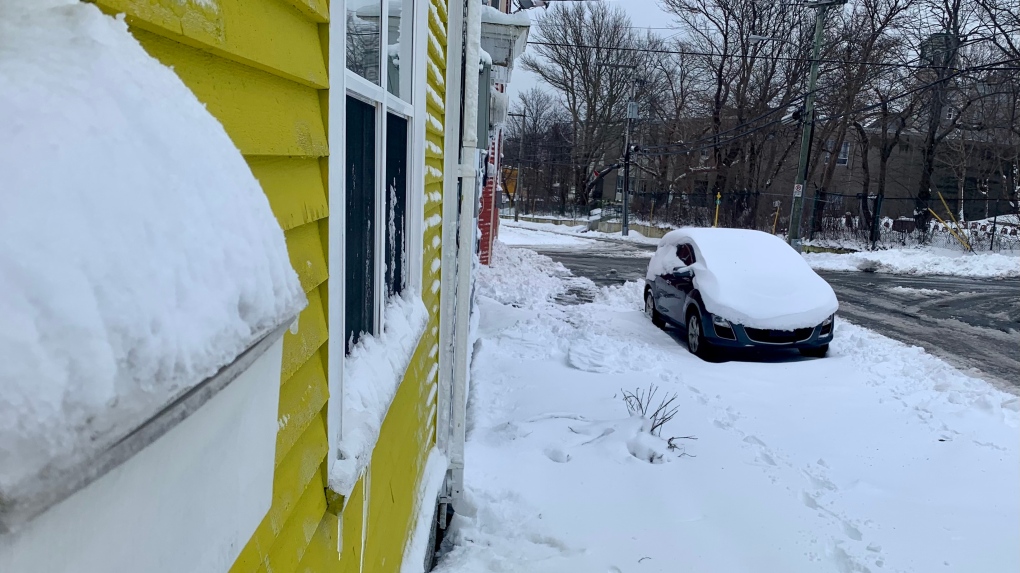 Snow covers a sidewalks and cars in St. John's on Saturday Jan. 16, 2021. The Newfoundland and Labrador election campaign kicked off today in St. John's under a blanket of snow while houses clattered in the strong winter winds. THE CANADIAN PRESS/Sarah Smellie

ST. JOHN'S, N.L. -- An election campaign in a Newfoundland and Labrador winter entails thigh-high snowbanks and winds strong enough to peel back eyelids. But on Saturday, Progressive Conservative leader Ches Crosbie found it does have an upside: knocking on doors is a little easier if people are already out shovelling.

"It's been very encouraging here," he said from inside his campaign's SUV, as his team warmed their hands and their phones.

Crosbie is flipping the partisan playbook, campaigning on a pledge to spend in order to create jobs.

"Our philosophy is that you can't cut your way out of financial mess, you have to grow your way out of it," he said. "Fiscal conservatism is something best practised when you can afford to do it. And we can't afford it at the moment."

He sees the stance as a rebuttal to the spending cuts some fear will come from the Liberals, led by surgeon Andrew Furey.

Furey pushed back against that narrative at his first official campaign event at the St. John's Farmers' Market Saturday morning.

"Now is not the time for cuts," he told reporters. "We need to grow the economy and the cuts are not going to come on the backs of hard-working men and women across the province."

Before the legislature was dissolved Friday afternoon ahead of the election call, the Liberals held power with a minority government. Furey was installed as leader of the party in August, inheriting the premiership from Dwight Ball, and had to call an election within a year, according to provincial rules.

In the fall, Furey assembled the premier's economic recovery team to address the province's staggering $1.84-billion deficit and $16.4-billion net debt, and to make suggestions on how the government could reorganize operations and build a stronger economy.

The team has been controversial, with a major labour leader dramatically resigning. A first draft of the team's suggestions is due in February, but it's not clear if it will be made public before the election on Feb. 13.

In his campaign announcement speech on Friday evening, Crosbie said Furey is trying to bury a plan for austerity measures, sending voters to the polls without knowing what they're in for.

"Andrew Furey's secret plan will mean fewer jobs," he said in the speech.

Crosbie and the Progressive Conservatives are Furey's biggest competition.

On Saturday, in the Cowan Heights suburb of St. John's, a few shovellers who stopped to chat with Crosbie seemed impressed -- particularly with Kristina Ennis, the PC candidate running in the district.

Ennis is a young professional who was laid off in December from her job as a research and development analyst with ExxonMobil. "I loved it, I really miss it," she said on Saturday. "And I am just another of those people who've lost their jobs -- the thousands of people -- this year."

She said she gets asked a lot why she joined the Progressive Conservatives, "especially as a young woman," answering that she was attracted to the party's emphasis on creating jobs through growth.

"I don't want my friends to keep moving away, and I don't want to have to move away," she said. "The labour market, there's not a lot out there right now, and the competition to get those jobs is really high. There's so many people unemployed right now."

At dissolution, the Liberals held 19 seats, the Progressive Conservatives held 15, the NDP had three and there were three Independents.

This report by The Canadian Press was first published Jan. 16, 2021.