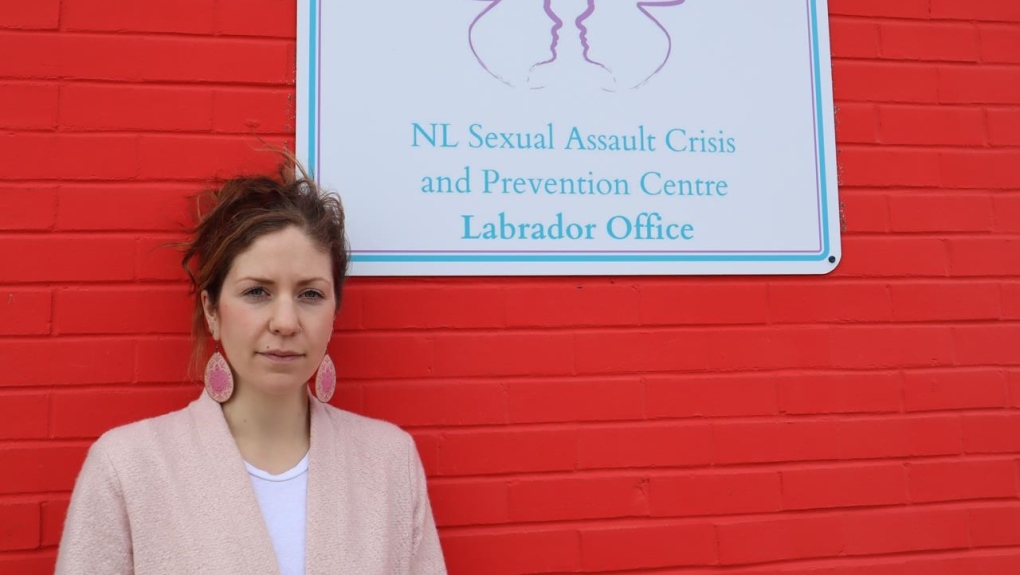 Deirdre Connolly opened the Labrador office of the Sexual Assault Crisis and Prevention Centre in Happy Valley-Goose Bay in March 2020, where she works with survivors. (Photo via the Canadian Press.)

ST. JOHN'S, N.L. -- Rigolet is a close-knit Labrador community of about 300 people where everyone knows each other. It should be a place where people feel safe, but resident Desiree Wolfrey says she's constantly warning her three daughters to be on guard.

"I'm always telling them to be wary of where you are and who you're with, and to be careful," Wolfrey said in a recent interview.

Labrador has a staggeringly high rate of sexual assault -- more than four times the national average, according to data supplied to The Canadian Press by the Royal Newfoundland Constabulary and the RCMP. And the numbers show it's rising.

Women and girls in the region live with the threat every day, Wolfrey said. She runs Kirkina House, Rigolet's small women's shelter, and the figures from the police aren't surprising to her. "I know most people don't go to the police, so it's a lot higher than that," she said.

The high rate of sexual violence against women in Labrador isn't new. Just over three years ago, a national project from Discourse Media found the town of Happy Valley-Goose Bay had the sixth-highest rate of violence against women out of 600 towns and cities across the country. That project covered the period from 2008 to 2015.

The new data from Newfoundland and Labrador's two police forces covers 2016 to 2020. It shows the rate of sexual assault in Labrador was between four and six times higher than on the island of Newfoundland during that time. Though Labrador is home to just five per cent of the province's population, it accounted for about one quarter of police-reported sexual assaults last year.

In the region stretching north from Happy Valley-Goose Bay and out along the coast, it was 681.

Deirdre Connolly has seen enough. She opened the Labrador office of the Sexual Assault Crisis and Prevention Centre in Happy Valley-Goose Bay in March 2020, where she works with survivors. She said the level of resources provided to a region with such a high prevalence of sexual violence is unacceptable.

"The lack of response becomes such overt systemic racism," Connolly said in a recent interview, noting most of the violence affects Indigenous people. "These are Indigenous survivors and it just doesn't get attention in the way it would in an urban or a white community."

Connolly points to years of recommendations from her organization's headquarters in St. John's for a sexual assault nurse examiner in Labrador. These nurses have specialized training and they can help victims make informed choices about reporting to the police. There's one such nurse in St. John's but none in Labrador, she said.

The recent provincial election would have been an excellent time for politicians to engage with the issue and push for change, but that didn't happen, she said. "I really do feel like it's entirely out of sight, out of mind," she said. "It's a provincial problem ... and it requires a provincial solution."

Allan Bock, a spokesman for the province's Labrador Affairs Secretariat, said the government is "open to exploring options" for expanding the sexual assault nurse examiner program.

"Our government delivers a range of support services and programs that meet the spirit and intent of the calls for justice in the final report of the National Inquiry into Missing and Murdered Indigenous Women and Girls," Bock said in an email late Sunday.

Labrador is a vast expanse of tundra, mountains, lakes and woods which makes up almost three-quarters of Newfoundland and Labrador's land mass. In 2020, it was home to 27,674 people, and Statistics Canada says roughly 43 per cent of those are Indigenous.

Rigolet is one of five fly-in communities along Labrador's north coast in the Inuit region of Nunatsiavut. Wolfrey said her town's sexual assault problem comes from a host of deep issues that are hard to solve.

"The lack of resources here, and also the intergenerational trauma that has happened over the years," she said. "It just keeps on getting passed down and passed down." Many in Labrador live in families with residential school survivors, or are survivors themselves -- the last residential school in the province closed in 1980.

There is also wide income disparity within the region. The north coast is home to the province's highest rates of poverty, while the western area around the mining town of Labrador City has the lowest poverty rate, according to a report Thursday from a provincial economic recovery team.

There is also a well-documented housing shortage in the region, particularly along the north coast. Statistics Canada reports that a fifth of Indigenous people in Nunatsiavut live in overcrowded homes.

Jessica Keating, who runs the Libra House shelter in Happy Valley-Goose Bay, says that all combines to leave women more vulnerable. "The cost of living has not changed, and affordable housing hasn't improved," she said in a recent interview. "A lot of women are ... forced to perform sexual favours for money for drugs, for housing, for food," Keating said in a recent interview.

Still, Wolfrey said there are things that can be done now that would help, like hiring a sexual assault nurse examiner or education programs in schools and in the community.