Residents on the New Brunswick island of Grand Manan are rallying to keep their village’s only bank open.

The Bank of Nova Scotia, or Scotiabank, notified customers of its plans to leave Grand Manan in January. The closure of the bank branch, along with its automated banking machine, is scheduled for Aug. 24.

Residents say they have many questions about why the bank is leaving Grand Manan after operating on the island for well over a century.

“It was really a time to encourage all of us to go electronic banking,” says resident Gregg Russell.

Several residents felt their specific questions and concerns weren’t answered at the meeting.

Scotiabank wouldn’t agree to an interview request from CTV News.

In a written statement, Scotiabank says, “We did not make this decision lightly and we understand that this will have an impact on the people and community of Grand Manan.” 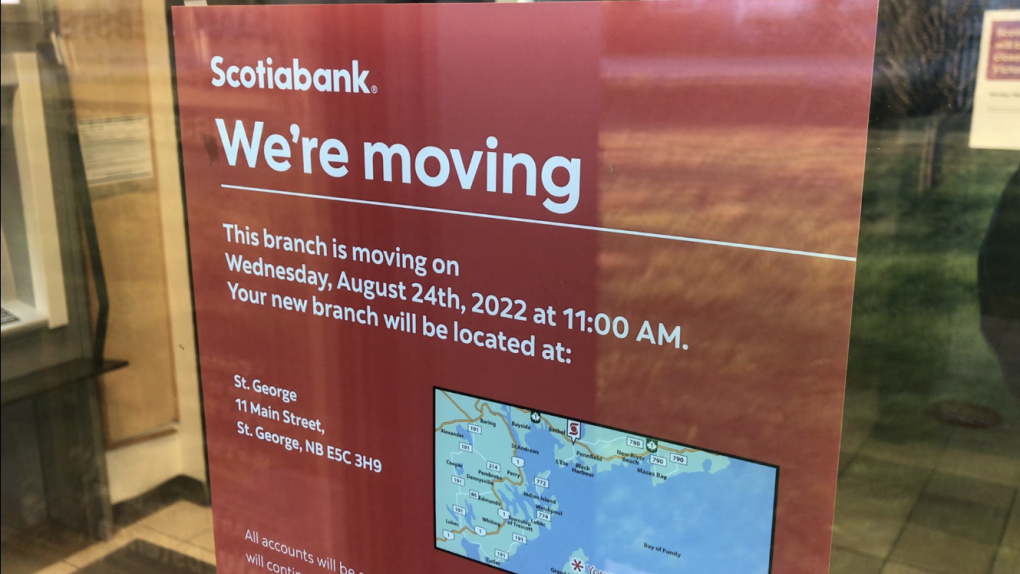 CONCERNS FROM CONVENIENCE TO PUBLIC SAFETY

Scotiabank says customer accounts from the Grand Manan branch will be transferred to its branch in St. George, N.B.

Grand Manan’s only regular connection to the mainland is a one-and-a-half hour ferry trip each way. The St. George branch is about 20 kilometres from the ferry’s landing in Blacks Harbour, N.B.

Island resident Charlotte Frost says if she took the island’s first morning ferry to do banking on the mainland, the earliest she’d be able to return to Grand Manan is late that afternoon.

“It’s not as simple as they make it out to be,” she says.

Other residents say the cost of leaving the island to do banking, including the ferry fee and rising gas prices, will cause hardship.

Another worry is the potential for island residents and businesses to have large quantities of cash on hand.

“You won’t be travelling two or three days a week to go to the mainland to do your banking,” says Leonard, who also owns two eateries on the island. “I’m fearful too of more temptations for break-ins because people are going to know that you can’t take it to the bank. So you’re going to have to keep it somewhere.”

HOPES FOR A DECISION REVERSAL

In its written statement, Scotiabank says it’s focused on helping customers make the transition to online and telephone banking.

Scotiabank wouldn’t share how many employees are affected by the branch’s closure in Grand Manan, nor what their future with the company would be.

Grand Manan residents are still holding out hope for Scotiabank to change its mind.

On a recent trip to Toronto, Russell held a one-man protest outside Scotiabank’s corporate offices.

“I spent two hours talking to many, many people who could not believe what was happening,” says Russell, who tried unsuccessfully to schedule a meeting with corporate officials.

A protest at Scotiabank’s Grand Manan branch is scheduled for Friday. Russell says more protests are being organized both on and off the island.

According to the Canadian Bankers Association, the number of bank branches across the Maritime region has been gone down in recent years. Between 2016 and 2020, New Brunswick lost 10 bank branches (from 152 to 142). Nova Scotia recorded a decline of seven bank branches (from 192 to 185), while Prince Edward Island lost two (from 27 to 25).

The only banks in Chipman, N.B., and Hartland, N.B., left those communities in that time.