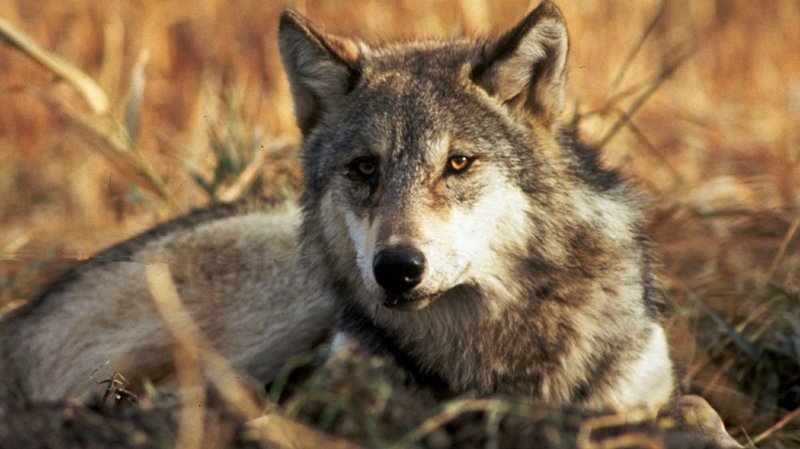 In this undated file photo provided by the U.S. Fish and Wildlife Service a gray wolf is shown.

FREDERICTON - Genetic testing has confirmed that an animal fatally shot last month by a hunter in northern New Brunswick was a wolf.

The surprising finding marks the first confirmed wolf sighting in the province in 150 years.

"Wolves are considered to be extinct in New Brunswick and there is no evidence that a breeding population has established itself here," the provincial Natural Resources Department said in a statement Wednesday.

The genetic analysis, conducted at Trent University in Peterborough, Ont., concluded the animal had DNA from two species: grey wolf and Eastern wolf.

The 90-pound canine was shot April 6 near Caraquet. Jacques Mallet, the licensed hunter who pulled the trigger, thought he was shooting at a coyote, which are typically much smaller animals.

Mallet said couldn't believe the size of the animal.

"When I killed it, we were a bit nervous weighing it," Mallet said in a recent interview.

The department said the range for this subspecies of wolf usually includes Ontario and Quebec, primarily along the northern shore of the St. Lawrence River. This type of wolf is also found in the United States in Minnesota, Michigan and Wisconsin.

The wolf carcass will be further examined at the New Brunswick Museum to determine whether it was a wild animal or a captive that escaped or was let loose.

Biologists believe wolves were hunted to extinction in New Brunswick by 1860, two years after legislation was enacted to encourage the destruction of the species.

Fred Harrington, an animal psychologist who has studied wolves and coyotes for over 30 years, has said the wolf could have come to New Brunswick on an ice floe, or it could have been someone's illegal pet.