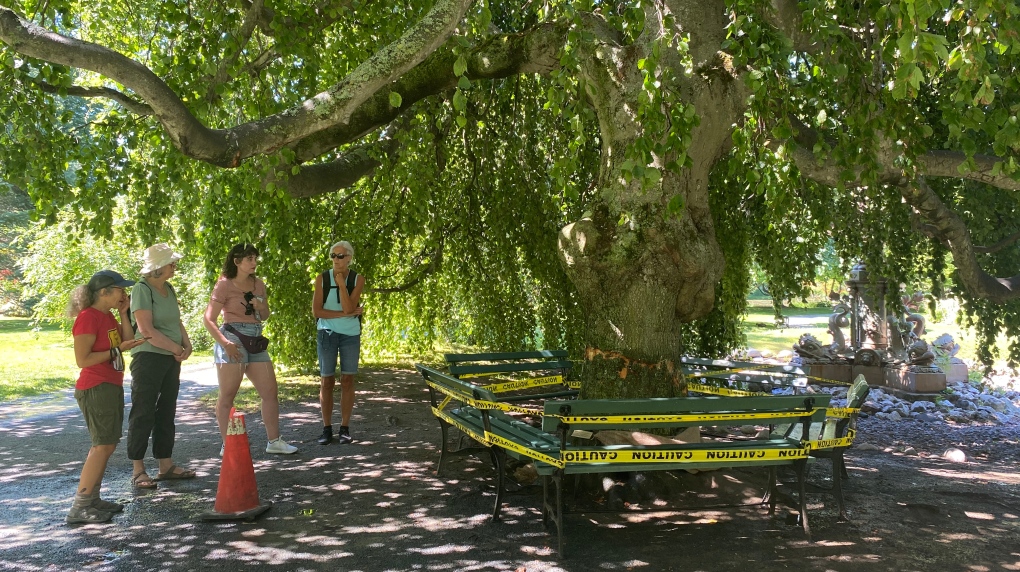 People check out a damaged tree at the Halifax Public Gardens on Wednesday, July 27, 2022. THE CANADIAN PRESS/Lyndsay Arnmstrong
HALIFAX -

While experts in arboriculture are working to save nearly 30 historic trees that were vandalized in Halifax, it may take years to know how many of the trees will survive the damage, the supervisor of the Halifax Public Gardens said Monday.

Last month, a security guard at the Gardens discovered that strips of bark were removed around the trunk of many trees, most of which are between 50 and 200 years old.

Sean Street, the horticulture supervisor for the Gardens, says the cuts -- which appear to have been done with a hatchet or small axe -- resulted in more than $350,000 in damage.

"But that is just a number; some of these trees are priceless," Street said in an interview.

The bark cutting -- called girdling -- is a way to kill a tree without cutting it down. If the cambium layer -- the part of the tree that produces new wood -- is damaged enough, the tree will die.

Four of the 32 damaged trees were not salvageable and were removed from the Gardens, Street said, adding that it's unclear how many of the remaining 28 vandalized trees will be lost due to the damage.

Longtime arborist Stan Kochanoff from Falmouth, N.S., is working with the Gardens' horticulture team to determine the best methods of cleaning and dressing the tree wounds in order to support healing.

Street said they are using coconut fibres to protect the trees' wounds and soon they will attempt bridge-grafting on the trees, which involves using healthy twigs called scion wood to connect healthy bark on either side of the wound.

The hope is that the trees were healthy enough before the injury and can survive off their existing nutrient reserves while the graft eventually reconnects the cambium layer around the bark.

"The longer the tree can survive with its own reserves, the more useful the bridge-grafts become, and you hope to hit the point where the tree has recovered and can feed itself," Street said.

This time next year, Street expects they'll be able to tell if the grafting was successful. "This will be a long, drawn-out thing," Street said.

Street's team will regularly monitor the health of the trees. For some of the younger trees, it may be clear in a year or so if they're showing signs of decline. For trees over 100 years old, it may take several years to see the impact of the damage.

Street is hopeful that "several" trees will survive, particularly the older ones with strong root systems, but he says it's too early to know.

A Halifax Regional Police spokesperson said in an email the vandalism remains under investigation and police are asking anyone with information to contact them.

"They intentionally came out to damage this tree, to try and kill this tree," he said, gesturing to a 200-year-old weeping beech tree.

Street said part of what makes the act of vandalism so upsetting is that it's very unlikely a new tree will grow to be as old as some of the damaged trees at the Gardens.

"I hate to say it, but we may be in a situation with global warming and invasive pests where we can never grow a 200-year-old beech tree again," he said.