Work of art, or an eyesore? New mural turns heads 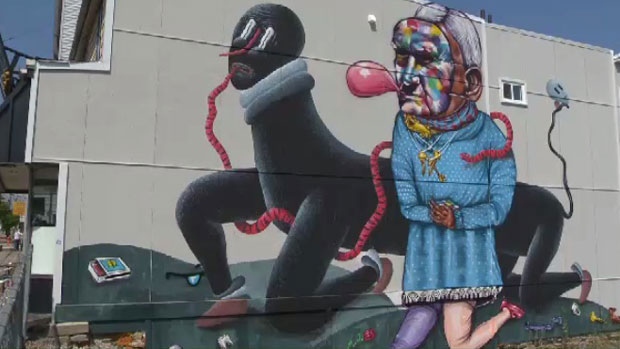 A mural that has been painted on a north end Halifax hostel is turning heads and sparking debate.

“You got skeletons and I have no idea what that animal is and a snake…I guess it’s art, but it’s nothing I like,” says resident Maxine Wagner.

“I think it is a fantastic display of creativity. I think it enhances the community,” says another resident.

Dave Hayden is the curator of Parentheses Gallery on Gottingen Street. He asked the owner of the hostel if artists he knew could cast colour on the building, which he considered a blank slate.

“I think it’s really great, I love the mural,” says Hayden. “I think it has completely transformed what was an old pit and a blank wall, to something beautiful and bright.”

The mural was a collaboration between a Romanian artist named Saddo, who is known for painting mythological creatures and a Toronto artist, named Other, who has an affinity for nomadic creatures. The pair has worked together on street art all over the world, including Germany and Argentina.

Other says the painting has no particular meaning, that the mural was free-styled, with each artists portraying their own style. He thinks that may be why people are confused about its presence.

Gerard Pennell has lived on Gottigen for 12 years. The painting is the first thing he sees each morning and he doesn’t like the sight of it. Pennell says he wishes he and the rest of the community had some input before it went up.

“The artwork is great, it’s colourful, but here on this street, I don’t feel it is appropriate,” says Pennell. “When you get up in the morning, when you got to go to work, you want to see something that lifts you up…to see a little spirit to you.”

“The only thing I see happy about it is a rose,” says Wagner.

The artists say there will always be critics and art, like this mural, will continue to provoke discussion.