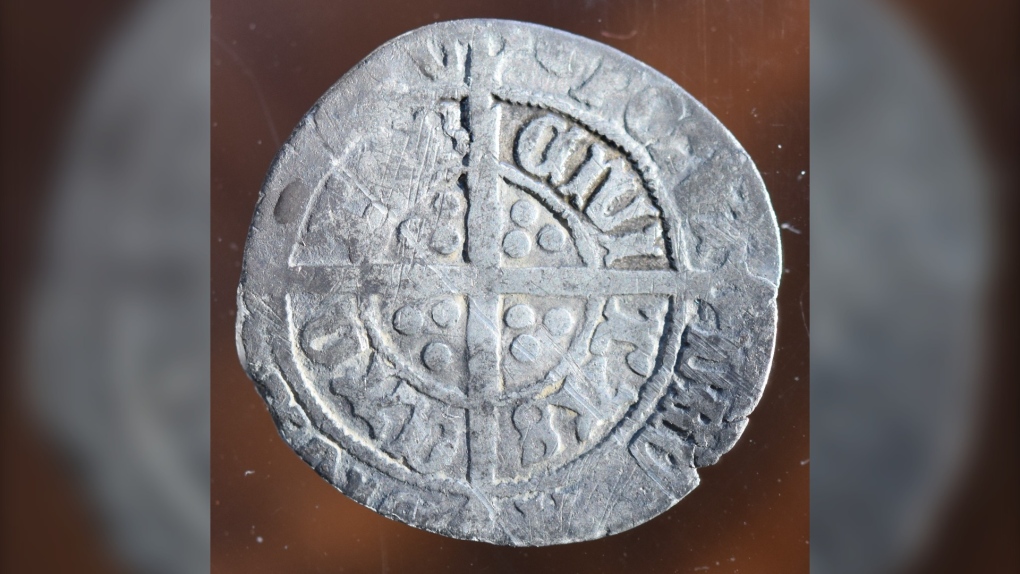 An archeologist in eastern Newfoundland says his team has unearthed what could be the oldest English coin ever found in Canada as shown in this handout image. (THE CANADIAN PRESS/Baccalieu Trail Heritage Corporation-William Gilbert)
CUPIDS, N.L. -

An archeological fieldworker excavating a site in eastern Newfoundland has unearthed what could be the oldest English coin found in Canada.

William Gilbert, head archeologist and supervisor at the Cupids Cove Plantation Provincial Historic Site, says one of his colleagues found the silver coin in September, adding that research has confirmed it was minted sometime between 1493 and 1499.

"It's important because it sparks your imagination," Gilbert said in an interview Wednesday. The coin, he added, is more than a century older than Cupids, founded in 1610. "You just have to wonder when you look at this thing: how many hands did it pass through?"

Known as a Henry VII 'half groat,' or twopenny piece, the nickel-sized coin was minted in Canterbury, England, more than 500 years ago. Gilbert said he came to that conclusion after consulting Paul Berry, former curator of the Bank of Canada's Currency Museum.

The coin features a stylized portrait of King Henry VII and a Latin inscription that says, "Henry, by the grace of God, King of England and France." The other side features a cross and the king's motto, also in Latin: "I have made God my helper."

The coin was found under 20 centimetres of soil near the northeast corner of the excavation, just beyond the remains of what was once a wooden palisade.

"You can picture kind of a Wild West fort arrangement," said Gilbert.

Settled by Bristol, England, merchant John Guy, the Cupids plantation is the site of the oldest English settlement in Canada. The English colony at Jamestown, Va., was settled in 1607. By 1613, Guy and a small group of colonists had built several structures, including Canada's first sawmill and brewery.

Meanwhile, research on the coin is ongoing. It is expected to be put on display in time for the historic site's 2022 tourist season.

Gilbert discovered the former plantation in 1995 and it was declared a historic site in May 2011. By that time, more than 150,000 artifacts had been unearthed at the site, which now includes an interactive museum known as the Cupids Legacy Centre. The community is on the west side of Conception Bay, N.L., about an hour's drive west of St. John's.

"It is incredible to imagine that this coin was minted in England and was lost in Cupids over a hundred years later," the province's tourism minister, Steve Crocker, said in a statement. "It links the story of the early European exploration in the province and the start of English settlement."

This report by The Canadian Press was first published Nov. 10, 2021.

A Russian soldier who pleaded guilty to killing a Ukrainian civilian was sentenced to life in prison on Monday in the first war crimes trial since Moscow invaded three months ago, unleashing a brutal conflict that has led to accusations of atrocities, left thousands dead, driven millions from their homes and flattened whole swaths of cities.

A memorial to mark the one-year anniversary of the announcement of the detection of an unmarked burial site at the former residential school at Kamloops, B.C. starts early Monday with a ceremony at sunrise and concludes with a closing evening prayer.

Storm leaves at least nine dead, many powerless across Ontario and Quebec

Tens of thousands of people remain without power after Saturday's powerful storm that left at least nine dead and caused extensive damage throughout southern Ontario and Quebec.

Wreckage found of plane that disappeared in Ontario with Alberta men onboard, police say

The wreckage of a small plane that disappeared last month in northern Ontario with two men aboard has been located in Lake Superior Provincial Park.

What is a 'derecho'? Climatologist explains Saturday's powerful storm

The storm that moved across Ontario and Quebec Saturday is known as a 'derecho', a powerful kind of windstorm that is long lasting and far-reaching.

A new study that brought sniffer dogs to an airport to search for COVID-19 has found that dogs may be able to detect the virus with high accuracy just from smelling skin swabs.

Health officials remain perplexed by mysterious cases of severe liver damage in hundreds of young children around the world.

The COVID-19 pandemic has been good for the wallets of the wealthy. Some 573 people have joined the billionaire ranks since 2020, bringing the worldwide total to 2,668, according to an analysis released by Oxfam on Sunday. That means a new billionaire was minted about every 30 hours, on average, so far during the pandemic.