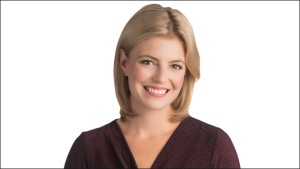 Ceilidh Millar is a co-host based out of Halifax, who produces content for CTV Morning Live and CTV News at 5.