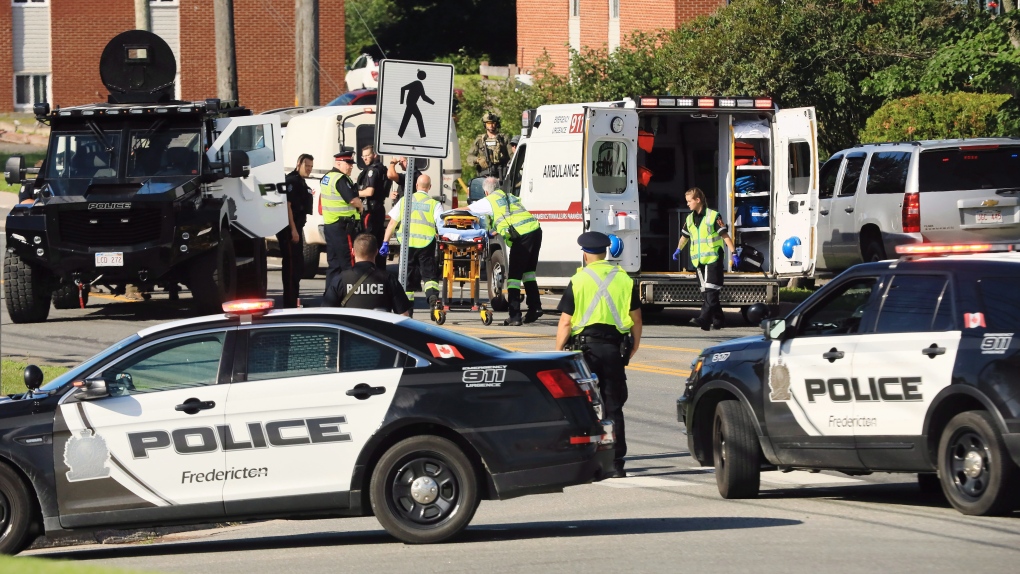 Police officers and paramedics survey the area of a shooting in Fredericton, N.B. on Friday, August 10, 2018. THE CANADIAN PRESS/Keith Minchin

FREDERICTON -- The Fredericton Police Force is bolstering its front line emergency response capabilities in the wake of a deadly summer shooting that claimed the lives of four people, including two police officers.

Chief Leanne Fitch said in a statement Monday that although the pain of the loss is still very fresh, the force has to adjust the way it delivers services to adapt to a "post-August 10" reality.

"Seven short weeks ago, our police force and our community suffered a grave tragedy, something we never imagined could have happened," she said.

"The senseless loss of Donnie Robichaud, Bobbie Lee Wright, and our cherished officers, Cst. Sara Burns and Cst. Robb Costello, is still resonating throughout our great city, and in the hearts and minds of loved ones and colleagues."

Although the force is continuing to mourn the deaths, Fitch said the force must also "adapt to the realities we have faced."

A number of officers have been transferred to the force's primary response team patrols, a move that Fitch said will impact staffing levels in other areas such as police station tours and public presentations.

The change will also curb the force's ability to roll out specialized traffic tools, such as portable electronic speed signs.

In response, the city of Fredericton has committed to hiring 16 new officers in the coming months -- 10 more than previously approved -- to strengthen the front lines, restore community services and provide some flexibility for officers who require time off for vacation or personal reasons, the chief said.

Offering a glimpse at how deeply the tragedy impacted the force, Fitch said the shooting has placed a strain on officers -- with some not yet able to return to full duties.

"As you can well imagine, the Fredericton Police Force is feeling this loss acutely," she said. "The pain of the loss is still very fresh for us, and it will continue to be as we face reminders in the coming weeks and months."

Matthew Vincent Raymond is facing four counts of murder in the Aug. 10 deaths outside an apartment complex in the New Brunswick capital.

Court documents say the incident ended after police shot the alleged gunman in the abdomen.

During Raymond's first court appearance, his lawyer said they were unable to proceed with the case because the defence was still awaiting disclosure -- or release of the findings of the police investigation.

Lawyer Nathan Gorham has said he eventually expects a plea of not guilty and a request for a preliminary hearing.