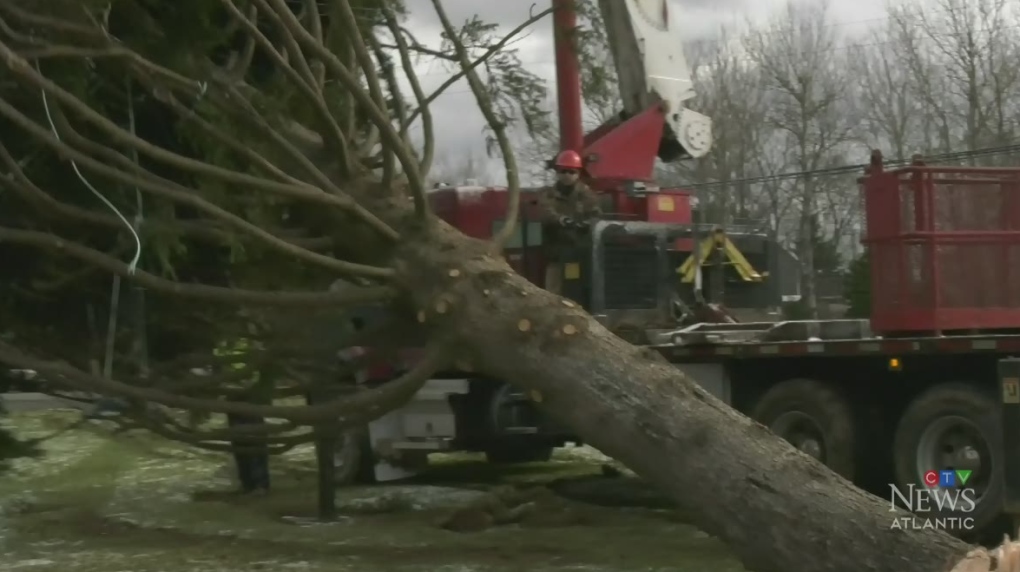 A report says that harvesting practices, including clear cutting, will be a factor if stands of balsam fir -- sought after for tissue paper and Christmas trees -- are to fare better in warming temperatures.

HALIFAX -- Global warming is likely to drastically reduce regrowth of a tree species that is a cornerstone of the Maritimes pulp and lumber industry, a new study by forestry scientists concludes.

Lead author Anthony Taylor, a forest ecologist with Natural Resources Canada, also suggests that harvesting practices, including clear cutting, will be a factor if stands of balsam fir -- sought after for tissue paper and Christmas trees -- are to fare better in warming temperatures.

The peer-reviewed paper in the journal Forest Ecology and Management says under existing global warming models, there is only a 20 per cent chance stands of balsam fir will naturally regenerate by 2085 in the region's forests.

The current chances of the balsam fir regrowing under existing temperatures, is about 60 per cent.

Balsam fir -- New Brunswick's provincial tree -- make up about one fifth of the mixed Acadian forest in Nova Scotia and New Brunswick. Annual forest reports by the provinces say it's close to one third of the annual harvest of softwood, used extensively in toilet paper.

The projections in the recently published article are based on comparisons of how species fared in almost 20,000 stands in northern and southern New Brunswick between 1981 and 2017.

The two regions have an average temperature difference of between 3 to 4 degrees, allowing the scientists to contrast how various species regenerate in warmer weather.

"It's another piece of evidence, based on actual field data, that supports the idea that as the climate warms, it will have a negative effect on the species we depend on for pulp and lumber supply," Taylor said.

"It's a pretty big chunk of the forest inventory."

Wake-up call to the provincial regulators

Lois Corbett, executive director of the Conservation Council of New Brunswick, said the study should serve as a wake-up call to the provincial regulators that existing forestry practices must begin changing rapidly in recognition of the reality of climate change.

"It shows the old way of managing forests, especially Crown forests, isn't going to work over the longer term. Not only is the profit of large corporations at risk, but the sustainability of the forest itself, the species the forests protects and the jobs and the economy the forest creates are affected," she said.

"It's a cry for a large change in forestry management."

Taylor's study suggests partial cutting, rather than clear cutting, increases the regeneration of species like balsam fir, which do better when shaded by a canopy of trees left standing.

His work builds on a 2017 study by Natural Resources Canada that used computer models to create the first region-wide assessment of the composition and growth of the Acadian Forest to the end of this century.

That study had predicted an overall drop in abundance of softwood species of between 10 and 20 per cent by the latter half of this century.

The Acadian forest is carefully watched in forestry circles, as it is a unique mix of temperate forests, with warmer weather trees like red maples and boreal forests that include fir and spruce.

Assuming that global greenhouse gas emissions continue at what climate scientists refer to as "business as usual" levels, both the current and the 2017 studies suggest the woodlands will experience an average temperature rise of 7 C by the end of the 21st Century.

Taylor said in an interview the study is confirming the powerful influence climate plays in forest regrowth after cutting.

Through prior centuries, the balsam fir had tended to repopulate naturally and had even been compared to weeds by foresters, said Taylor.

Under the new scenarios, climate change is likely to increase the regeneration of trees like sugar maple and poplar that tolerate warmer, dryer environments, the paper concludes.

The forestry researcher says one theory of why the balsam fir fare less well is that they may be more susceptible to fungal growth that rots the trees internally -- a phenomenon that also reduces their commercial value.

In an interview, Taylor also said the forestry industry needs to strongly consider adapting its practices, noting that the balsam fir will be more exposed to heat and slow regeneration in clearcuts. "It has to think what it can do to maintain it or to substitute," he said.

This report by The Canadian Press was first published Feb. 21, 2020.