'Holy smokes I finally made it': Celebrity shark arrives in Newfoundland 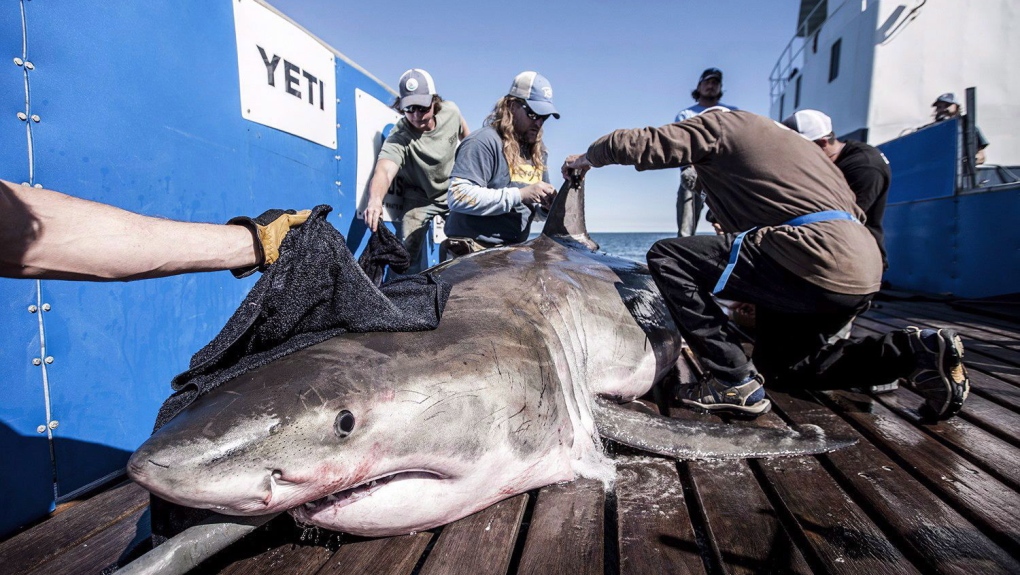 A shark known as "Hilton" is seen in this undated handout photo. (THE CANADIAN PRESS/HO, Robert Snow, OCEARCH)

CHANNEL-PORT AUX BASQUES, N.L. -- A celebrity great white shark that has been charming Nova Scotians for two summers has popped up in waters off Newfoundland.

Hilton tweeted Friday morning from just off Channel-Port-aux-Basques on the province's western coast.

"Holy smokes I finally made it to Newfoundland!" the much-loved shark announced in an exuberant tweet.

"Thankfully the gut I got from gorging myself in Nova Scotia is helping keep me warm cuz this water is chilly! I expect there's plenty of food up here to help me keep piling on the pounds though."

The 600-kilogram male shark was tagged by the marine research group Ocearch, which curates a wry Twitter feed chronicling his movements as he migrates along the eastern coast of North America.

Hilton has spent a lot of time off Nova Scotia's south shore over the last two years, but more recently travelled up to northern Cape Breton and had been flirting with braving the colder waters off Newfoundland.

On Friday, some chimed in on Twitter about his venture north.

"Who's gonna screech you in, Hilton?" one follower joked, referring to the custom of drinking the alcoholic beverage to become an honourary Newfoundlander.

"Remember you're supposed to kiss the cod. Not eat it," wrote another.

Hilton had earlier noted that white sharks are able to keep their body temperature "a little warmer" than the water they're in.

Another shark tagged by Ocearch, known as RockStarLydia, had pinged from Placentia Bay, N.L., in 2013.

Ocearch believes there is a mating site off Canada's East Coast, and is currently on a Nova Scotia research trip.

On Sunday, the team was near West Ironbound Island when members tagged their third shark of the expedition, naming him Hal for the people of Halifax. They tagged two other male sharks, Nova and Jefferson, in the same area last week.

Holy smokes I finally made it to Newfoundland! Thankfully the gut I got from gorging myself in Nova Scotia is helping keep me warm cuz this water is chilly! I expect there’s plenty of food up here to help me keep piling on the pounds though pic.twitter.com/EU0g15EmEG